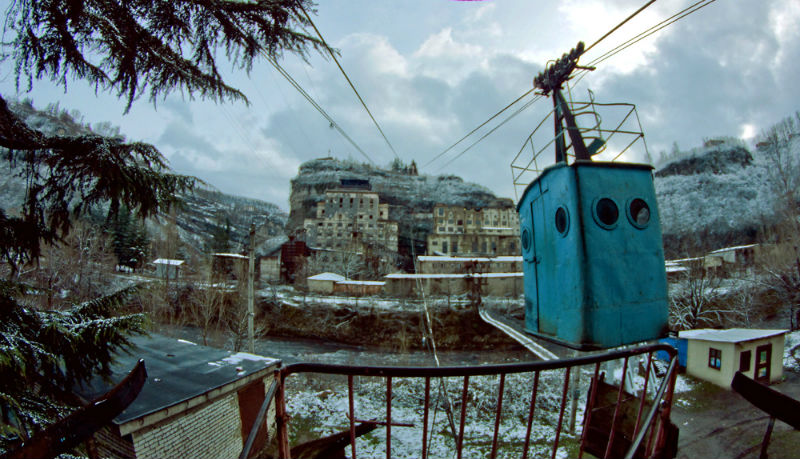 Chiatura is a mining town in Georgia that has dozens of functioning and broken cable railways built back in the 1950s. The town was earlier expected to live long and prosper because it had huge reserves of ore and manganese. But it was finally forgotten and now it looks helpless. Those who still live in Chiatura keep moving to other places and abandon their flats.

However, this town highly impressed a photographer Pavel Makarov who stayed in Chiatura for several days. He was enjoying those old cable railways and taking photos of the half-destroyed town with that almost forgotten Soviet atmosphere.

The main sight of the town – manganese mines that surround the entire town of Chiatura. Anyone who comes to this place can see how manganese is mined.

Manganese deposit of Chiatura is over 100 years old. There are six functioning manganese mines surrounded by cable railways here.

People have been living here for more than 60 years. They live slow, recollecting the bygone greatness of the USSR in the city that so much resembles Baikonur or Chernobyl…

Chiatura still remains that very city in the world with the highest number of lifts used by people for free.

Operator of the cable railway. He can tell many interesting, sad and tragic stories…

Chiatura is located 220 km from Tbilisi – the capital of Georgia. One can get to Chiatura from Tbilisi by car or railway.

They move to Tbilisi, Russia and even leave their documents.

This kitchen has not been used for cooking for long.

This flat is located in a 12-storey building where 60% of flats are already empty. The building has no central heating, residents use potbelly stoves.

Chiatura is a non-tourist town. However, it’s a special place with its own charm, hospitable people and beautiful views.

2 thoughts on “Chiatura: The Disappearing Town of Georgia”