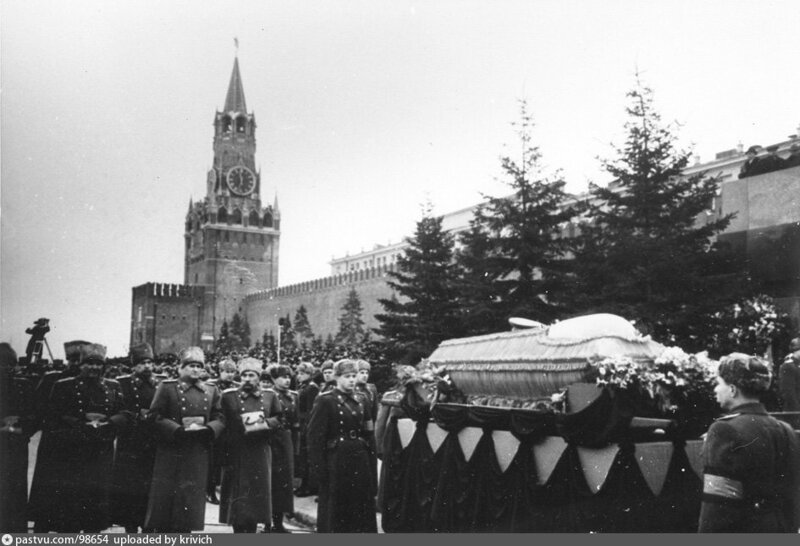 66 years ago, on March 6th, all Moscow was burying the Chairman of the Council of Ministers of the USSR, General Secretary of the Central Committee of the Communist Party of the Soviet Union, generalissimo of the Soviet Union, leader and teacher, Great Helmsman and father of the people Joseph Vissarionovich Stalin (Dzhugashvili). According to the official version, he died late on March 5th from cerebral hemorrhage.

The Moscow radio informed people about his death early on March 6th. 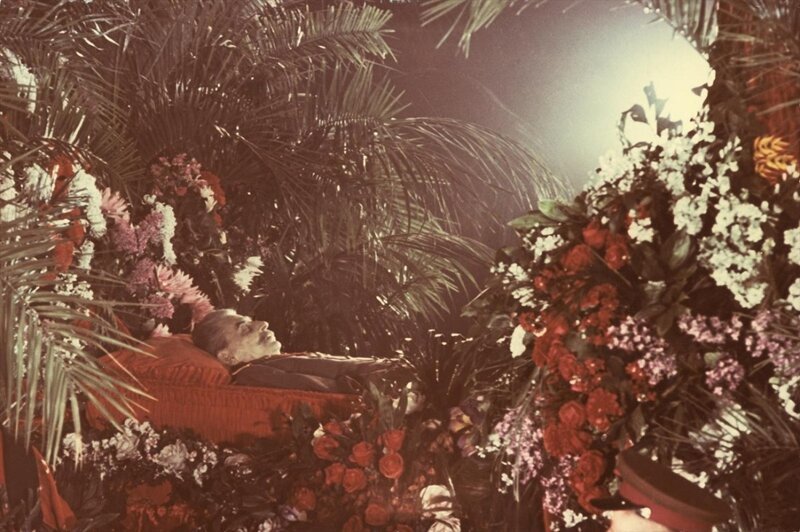 Then, in 1953, the news was perceived by Soviet people in different ways, in most cases when they tried to describe their feelings people mentioned such words as “confusion”, “frustration”. Some of them didn’t hide tears. But in families, whose members were repressed, reigned a feeling of triumphed justice and discreet joy.

Due to opposing attitudes towards the Soviet leader many conflicts appeared among students. Some preferred to ignore the funeral of Stalin, but paid last respects to composer Sergey Prokofyev who passed away on the same day. 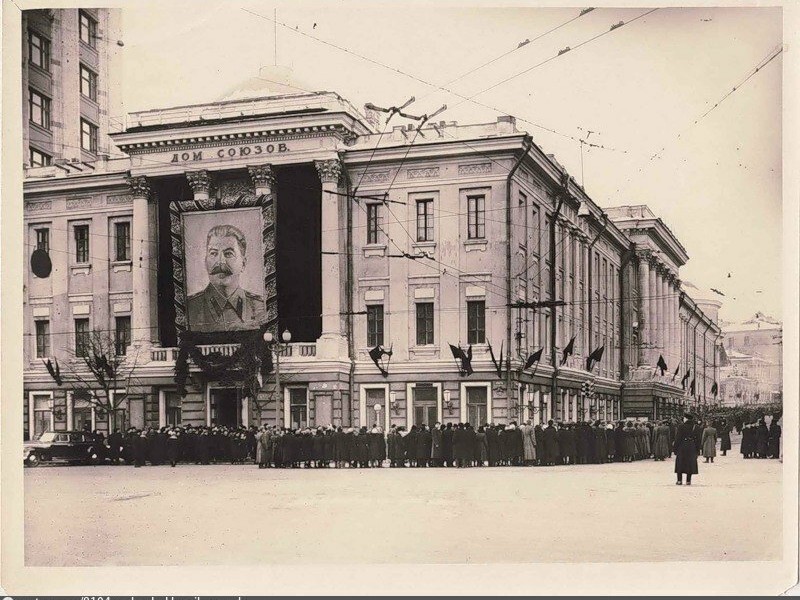 Only prisoners did not hide their happiness, they believed it meant amnesty in the near future for them, time showed they were right.

The body of Stalin was demonstrated in the Pillar hall of Unions in Okhotny Ryad, Moscow, where people waited a funeral of Lenin in 1924. The leader was put into an open coffin that stood high on the pedestal among bright plants and flowers. Beria came to say last goodbye too, but someone didn’t like this fact and tried to remove him from those memorable photos with ink (photo above). 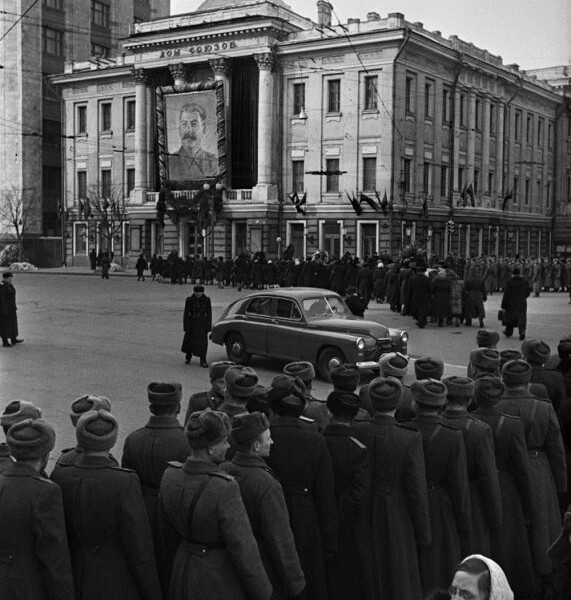 This is how ordinary people commented on the funeral of Joseph Stalin:

Sergey Agadzhanyan, student: “We came up to the coffin. A wild thought came to my mind – I have never seen Stalin and now I will. A few steps away. I didn’t see full members of the Politburo at that moment, only ordinary people. But nobody cried. They looked frightened – by the death and the crowd. Maybe they did not cry because of fright. That was fright combined with curiosity, lostness, but not grief, not mourning”. 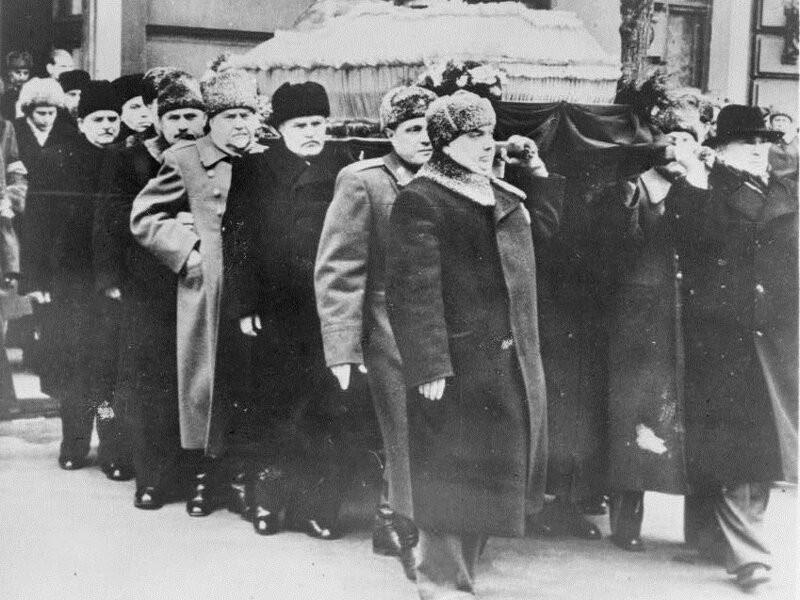 The farewell in the Pillar hall lasted three days and three nights. The funeral itself began on March, 9th at 10:15 a.m. when the first leading politicians of the country left the House of Unions with the coffin. The coffin was mounted on the weapon cradle and the procession moved towards the mausoleum. 4400 lined up soldiers and 12000 workers were already waiting on red Square. By the way, the funeral was arranged by Nikita Khruschev, the following head of the Soviet State.

Funeral cortege. Beria, Malenkov, Molotov and others pretended to carry the coffin. The job was actually done by officers moving between them. They carried the coffin on their shoulders. The role of Stalin’s comrades was mostly symbolic. 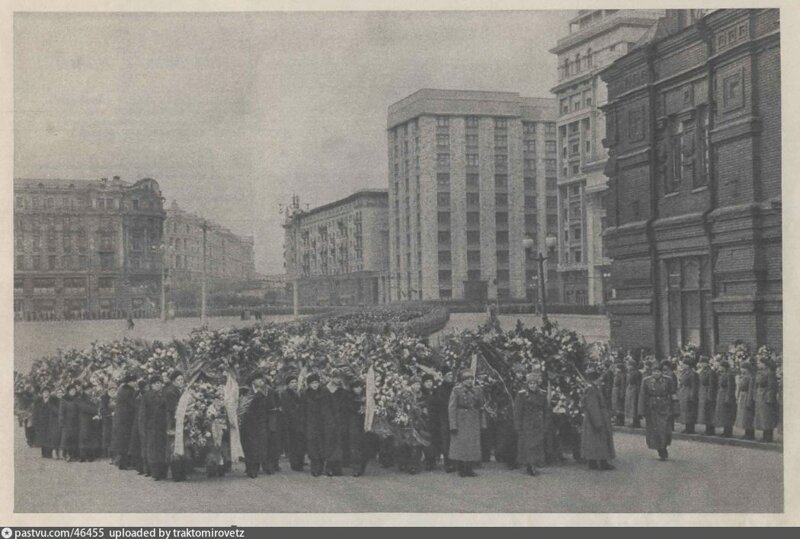 Manezh Square – the procession was moving towards Red Square to the music of Сhopin. It took them 22 minutes to get to the mausoleum. The mourning rally began on Red Square at 10:45.

Not only Soviet but also foreign prominent leaders were standing on the mausoleum that morning. President of Czechoslovakia, the devotee of Stalin, who was there too, got a bad flue and, when he came back to Prague, he died from aortic rupture. Some Czechoslovaks believed him to be poisoned in Moscow. 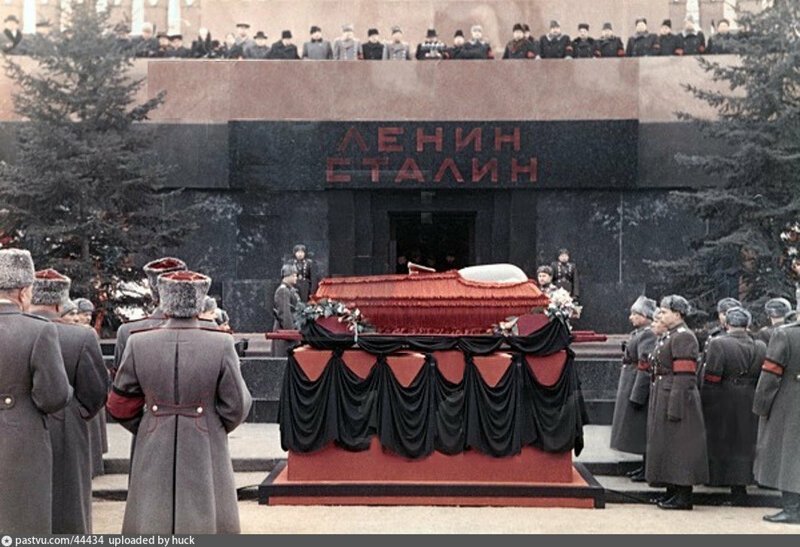 The rally lasted a bit more than an hour. At 12:00 they saluted to Stalin with gun shooting, and after a minute of silence they played the anthem of the Soviet Union. Then aircrafts flew over Red Square, Soviet factories gave farewell horns.
Tatiana Bolshakova, five-grade schoolgirl, remembers that day to be clear, sunny and warm. Her family went outside and it seemed that everything, that could buzz and hoot, was buzzing and hooting. Tatiana began to cry but she didn’t see anyone else crying, although people around looked upset.

Numerous wreaths on Red Square – the photo is believed to be taken the following day after the funeral.

Sonya Ivic-Bernstein, student: “Restrained glee was reigning in our family. It did not seem good to be happy about someone’s death, but we couldn’t help rejoicing. I ran to the Institute with a feeling of a very positive event and met the boy I used to like. He replied to my smile with a frozen stare: “How can you smile on such a day?”, and mournfully turned away from me.

Yuri Afanasyev, student: “I suddenly heard someone swearing about Stalin. He was named by different filthy words. “Whiskered”, “bastard” etc. I was shocked. People were talking loudly so that others could hear! And nobody stopped them”. 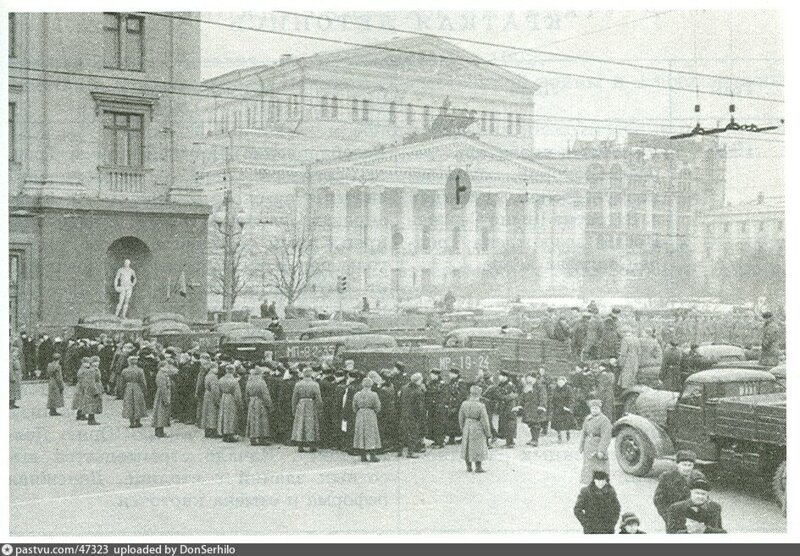 Due to bad organization of the funeral there was a terrible crush in the center of Moscow, they simply did not expect so many people to come. The situation was especially bad on Trubnaya Square – hundreds or even thousands people died, much more – injured. They were trying to save themselves in backstreets, under trucks… When everything was over, piles of shoes and clothes remained on the Square.

As someone recollects: “Some time after the funeral my neighbor from the third floor named Kostya, who survived the war, came back from the hospital with his leg cut off to the knee. During the crush his leg got stuck in the well, he had an open fracture at the very knee-cap so his leg was amputated. He had many medals and orders for his deed during the war, but he said to me that the most outstanding reward for the victory was given to him by the leader post mortem”. 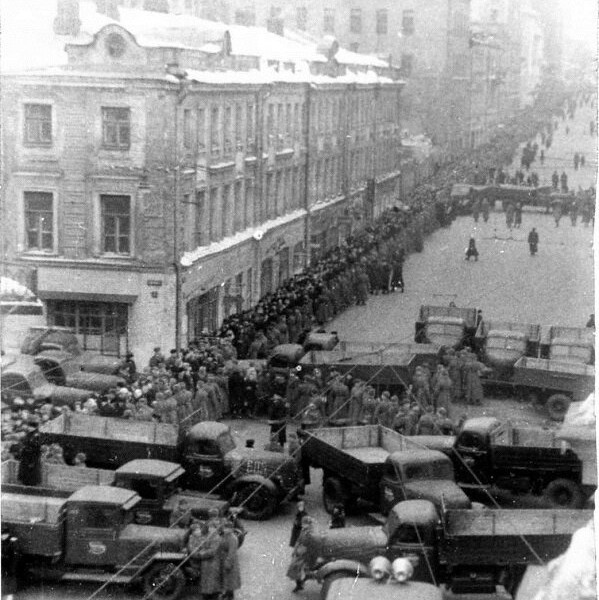 Many many people were squeezed between trucks, intended to regulate the event, and houses, they simply could not move while more and more potential victims were coming. That threat to be crushed to death in the crowd was more than real. People, especially women, were screaming with pain and fright.

Leonid Simanovsky, seven-grade student: “I managed to come off the crowd and save myself in the yard of a small house. It was so cold, I almost froze to death at night. In the morning, when the streets cleared away from the crowd, I went home, parents were so happy to see me alive, that even did not scold too much. But my friend Misha did not come home, he was later found in a morgue”. 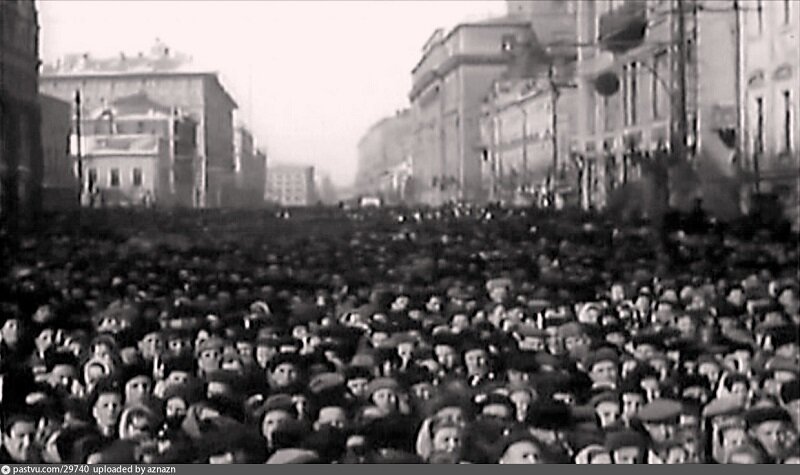 Pavel Men, seven-grade student: “My brother Alik with friends went to see Stalin in the coffin out of curiosity. And when they reached Trubnaya Square they found themselves on the meat grinder. It was a nightmare! They ran to pompier ladders and climbed to the roofs… This is how they managed to leave that place and save themselves. It seemed the only way to survive. The ladder was hanging high, so they stood up on shoulders of each other to reach it”.

Those mothers who didn’t allow their children to go to the square that day, saved their kids’ lives.

After the funeral people discussed the terrific numbers of victims, but did it in whisper and only with close friends. 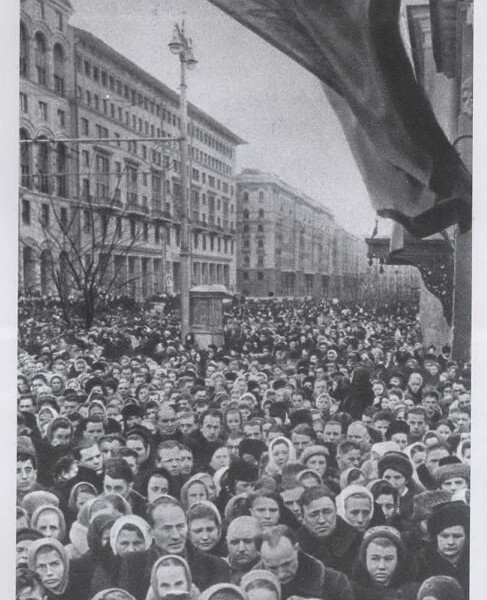 Grigory Rozenberg, preschooler, remembers his granddad, former political prisoner, exclaiming: “So bad.. So bad!..” and after a pause .. ” So bad it hadn’t happen thirty years ago!” He also remembers the icy cold look of his mother at granddad and how she ordered Grigory to leave the room”.

Days after the funeral students were talking about the successor: “It would probably be the one who says the elogy the first!” They were right, as that person was Beria. 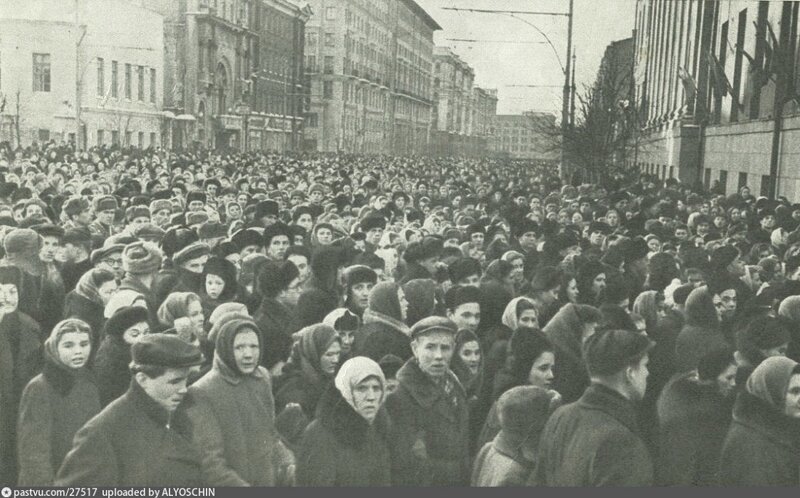 Some of those who dared to criticize Stalin could get lost or be beaten by other people. At school or institute, for example. Many mysterious deaths happened soon after the leader died. He finally  took thousands with him.