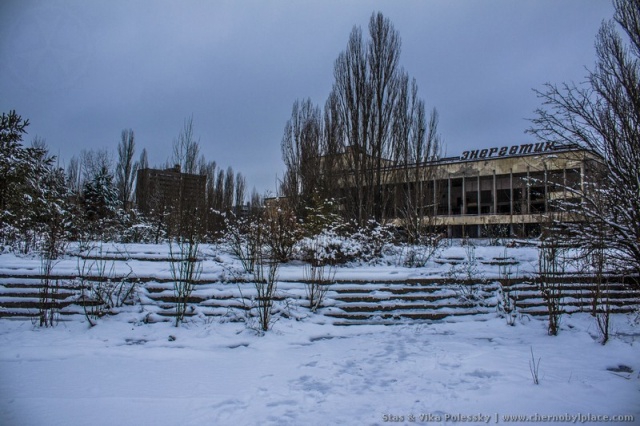 Winter photos from the Pripyat not so often can be seen. Here is photos Stas and Vika made on their trip to “Zone”. There are less of the green leaves and you can see more detail as the leaves don’t block the view. More details of the ghost city – time has stopped here in the eighties. Pripyat, winter 2019. 33 years has passed since when the reactor blown up, people were evacuated. This town famous ferries wheel – one of most photographed place. Cafe “Pripyat” was a meeting point of the city young and old. Average age of Pripyat people was around 26 y.o. – Pripyat was a city of youngsters – scientists and power plant workers. So they liked their city cafe. This was a Pripyat port. “Rocket” hydrofoil torpedoes (passenger express speed ships) passed here by the river Pripyat. Now it’s one of the most “spoiled” radioactive place in town. Many buildings got some leaks because stay for years lonely – so in winter ice inside. And apartments all got rusty, every valuable was stolen, you can’t find “authentic” flat that is looking like in 1980s everything is looted, spoiled. In some flats people are living when they “stalker” in the city. Vintage Soviet old computer, it was called a brand “Jupiter”. But it’s looted to the core. Pripyat stays as reminder to us all how can life change in just a mere seconds. Now 2600 square miles are deserted, no people – this is bigger than Luxemburg. Villages, and other places that won’t able people live for around 1,000 years.