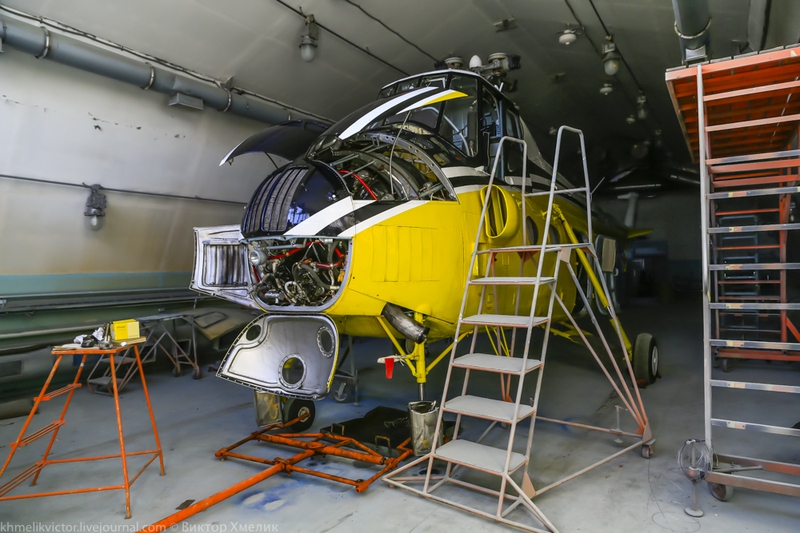 This is last of the Soviet copters – the last of MI-4’s ever made. For some reason it’s the only MI-4 copter left in Russia. So they treat it as a precious thing, and want to restore it for a museum exhibit.

It is sort of very hard – finding parts is a real pain. Those MI-4’s were made in the 1960’s. It’s sort of a Soviet clone of the Sikorsky S-55, but twice as heavy and stronger (it could lift twice the payload).

It was made from 1953 to 1968. Its purpose was to catch up with the American mid-range helicopters. In Russia it was widely used – including usage in the army – until the Mi-8’s appeared in the 70’s. Around 3900 were made, and here it is the last one.

It could carry up to sixteen people, with three people being the copter’s crew. The weight is 4900 kilos, and top speed is around 150 km/h.

In 1988, a copter crashed and eight people on board all died. After that the Soviet state issued an order to ground all the Mi-4’s they have. They found a “critical malfunction, and risk of a bolt coming out of place, which causes the pilot to lose control of the helicopter.” For this the copters had to be grounded, and then they were all destroyed.

So here is the only one that survived, and parts are hard for him to find as all the others were destroyed.

The photographer who visited the plant where the copter is being repaired said that the repair team are sort of in despair – they can’t find useful parts and the engine is always stopping – they can’t stabilize it in a working mode. So now they ask that anyone who might read this if you by chance have got any part, then please get in contact and help.

They are also missing the propeller blades.

Let’s hope they will completely restore it someday.