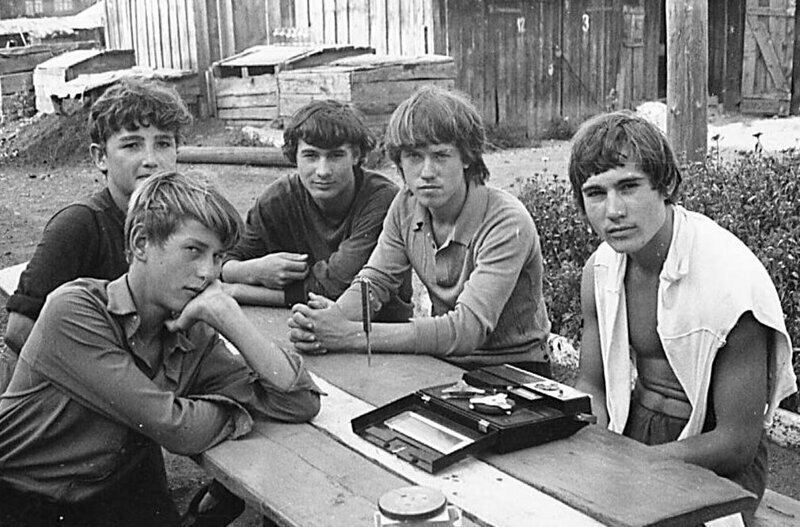 Now, in times of Internet, Youtube, Netflix and etc we don’t have a question how to entertain yourself. But in Soviet times we had only two TV channels (both state owned) which were airing mostly boring stuff (no decent movies, no cartoons, no TV shows). So people had to entertain themselves by themselves.  Here are some examples what people were up to in Soviet times: 1. Sitting near their house with guitars was a must in summer. 2. Having a glass of beer after the work wasn’t considered to be a flaw. (Maybe in every country it was like that) 3. In summers camping also was a big fun to do. Please note an “ACCEPT” t-shirt – was a real rarity in Soviet country – t-shirts with foreign bands. Dads were fond of fixing cars by themselves right near their houses and kids were often watching. Table hockey was a big fun And chess – in any yard or court yard.. A group of boys listening to music from a portable tape recorder – very rare thing. In winters many played hockey in small hockey pits many Soviet yards had. Kids always played a “WAR” (without computers). Usually with toy or wooden guns. Usually they were divided for “Ours” and “Germans”. Men were fond of going on picnics, with sandwiches, barbecue etc. Here you see Gagarin with his male friends-cosmonauts on picnic. Sitting in a garage with male friends is a Soviet tradition that is still intact in Russia. Often they were drinking there. Also many yards had benches for Domino game playing. Many played.