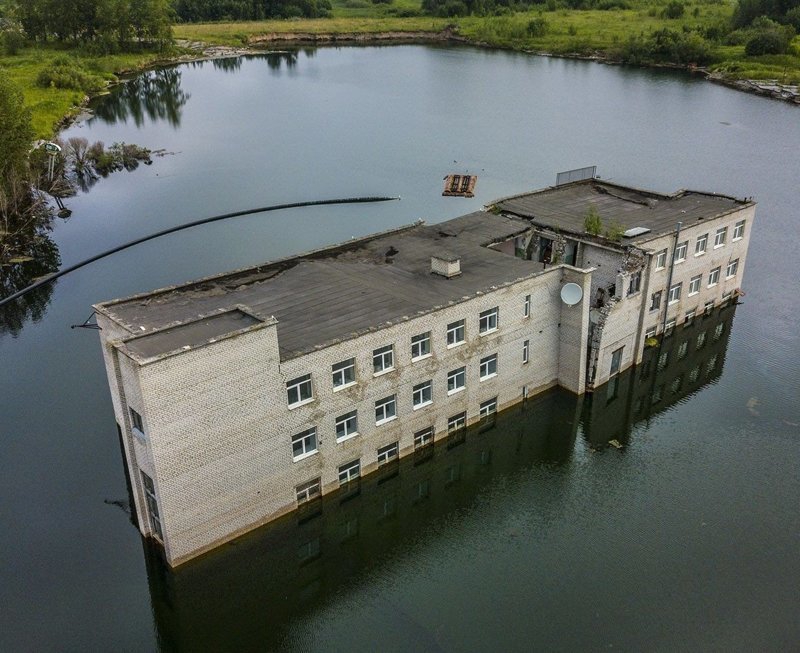 Berezniki town is known across the Russia (and even abroad) for the constant happening sinkholes in the town. However not everyone knows on how big scale this is happening and how it looks like, here we are going to explore this topic in detail: The first sinkhole appeared here in 1986 – the year Chernobyl accident happened. Then more and more of them caused chained reaction – people say that those sinkholes appear with loud booms and light flashes – probably the gas explosions. However first sinkholes were appearing in the forest, some distance away from the town. Then starting year 1993 more and more sinkholes started appearing and over 100 local earthquakes were registered in duration of ten years. This Ural city is standing on the bottom of ancient salt sea – and for this there are plenty of mines trying to excavate salt, potassium and other minerals from the crystalized sea bottom that is under ground. But also because of this all the water that goes into these appearing sinkholes is a salty water, impregnated with ancient minerals. This lake in the middle of the photo is actually is a flooded sinkhole too which buried a factory inside of it. Those are survived structures of the factory. This is a collapsed factory building on the edge of the flooded sinkhole. Soon these buildings are expected to crawl into abyss too. In year 2010 a sinkhole appeared right at the Berezniki train station. The accident blocked all trains transportation for fourteen days. All railways were leading to nowhere – to the flooded sinkhole. In one year they managed to put some sand into it but the train was never restored. Then one year later one more massive sinkhole appeared near the mine administration building complex. They tried to fill it with sand too but an accident happened – a tractor went down from the side of the sinkhole right into the water – the tractor driver died. On the photo you can see another victims of the sinkholes – the road round about got destroyed – and a garage complex went down under. The remaining buildings here are constantly sliding into water. Here you can see cracks in the building that is sliding down. All those places are projected to get under the water any time soon. The drone photos of these places look mesmerizing. For the moment (year 2018) there are a whole number of the places in the city that are forced to evacuate. Some other places are slowly (a few cm a year go down under the water). Those are the forced to evacuate houses in the city.

Berezniki is the second largest town in the city – with over 150,000 population and sadly people don’t feel themselves safe in the town anymore.

Hope you liked this story, we have more below!