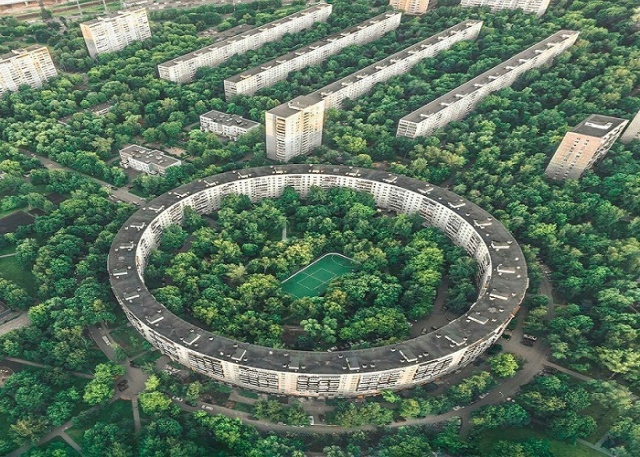 In the 1970’s there was a new building built in Moscow which was very different by design from the regular “panel block” houses of that era. Here is an insight into its history. Two younger architects wanted to design their own housing project to diversify a bit from the dull typical Soviet planned architecture. Weirdly enough, the main communist architectural authority let them step out from the standard solutions and make a round building. In 1972, the construction of the huge accommodation building of an unusual form was completed. It made a big impression on the people of Moscow and of all the USSR. The bird’s eye view of the building is stunning. It’s huge size, original form and very comfortable inner yard, is totally different from the nearby houses. This is how pedestrians see it. The diameter of the structure is 155 meters (around 500 feet). It has 26 entrances, 913 apartments, and six big archways to enter the courtyard. The first floor of the building contained pharmacies, shops, hair salons, a laundry and tailor shop, also a childrens’ club, and even a library (back in Soviet times it all was there). The isolated courtyard has its own park, with playgrounds for kids and feels like it is a long way away from the busy town.

Now a bit about the cons of the thing: The rooms here are not rectangular but more like trapezoids, which makes it harder to place the furniture.

Also the courtyard has bad acoustics – a small noise echoes a lot, it bounces from the walls making it noisy at night if something is happening in the courtyard. And this is its sister-house – the second one built in Moscow after the success of the first one. Because it was all happening right after the Moscow Olympics in 1980, they planned to build five of those houses so that they sort of make up the eternal Olympics symbol in Moscow. In 1979, a third house was built with 26 entrances again but with 936 apartments. It was built near the Mosfilm Soviet movie studio and the best apartments were given away (in USSR you were given an apartment for free, you didn’t have to buy it) to the actors of the cinema and theater.

The panoramic view of lights on especially nice at nighttime. Those round houses are very nice to see on Google maps. But because the expenses for constructing this kind of a habitat wer too high, and the land required to build them was too huge, the Moscow authorities decided to stop building them. Because of that, the fourth and five Olympic ring houses were never constructed. Also to fully enjoy the view you had to view it from above, and normal people were looking at them just from the ground at that time.

4 thoughts on “Why Moscow Has Huge Round Bagel Houses”