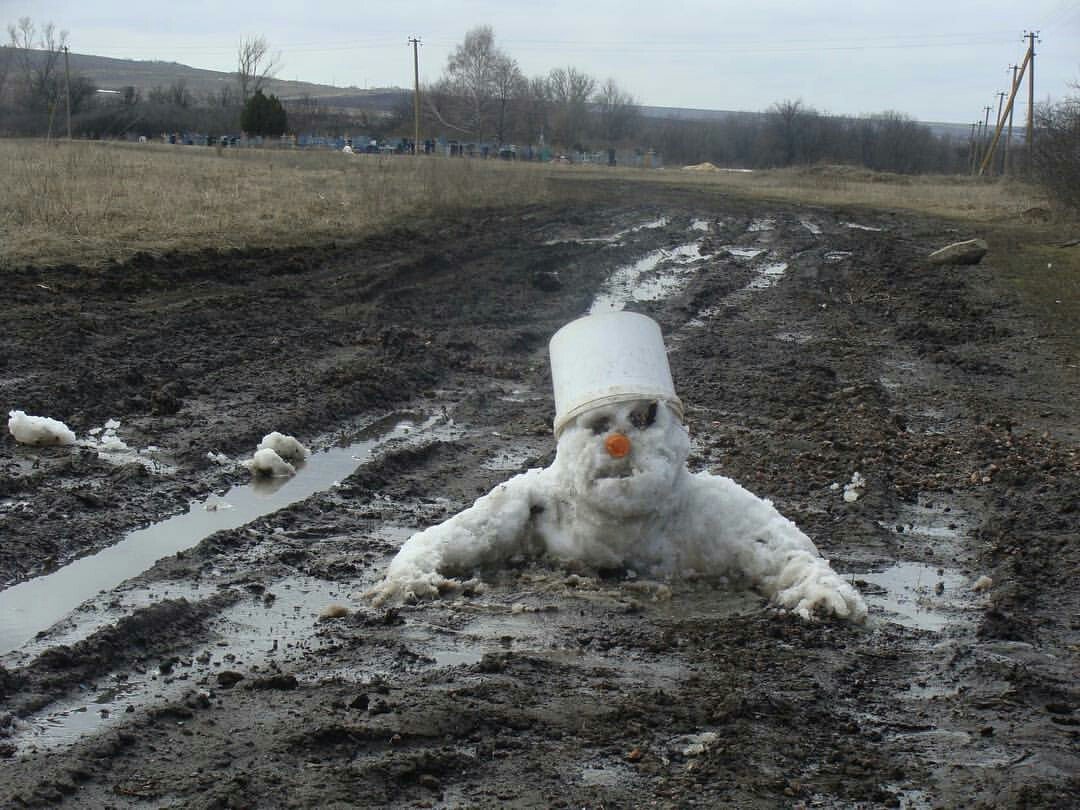 We are continuing our daily report of the funny and interesting stuff happening in Russia today. Take a look on this Easter evening.

Couple of days ago there a fight happened in a Burger King joint. Interestingly enough restaurant employees didn’t behave themselves like pussies but attacked the attacker pretty well. Take a look video above. 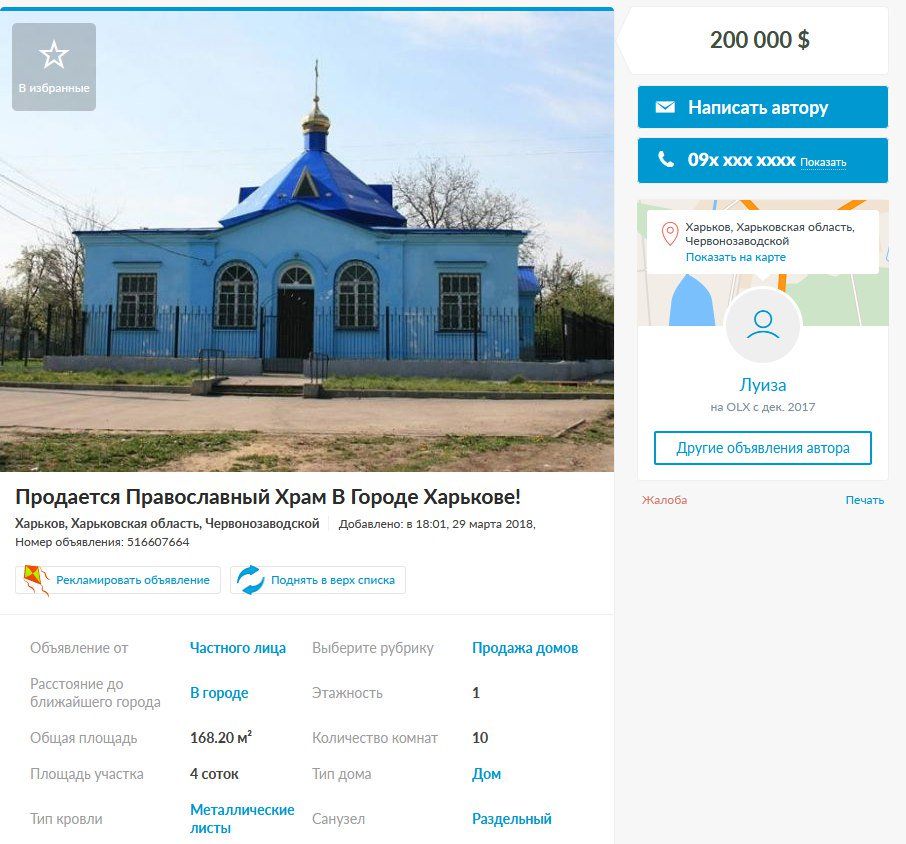 Someone is selling church in Ukraine, for $200 000. A turnkey business solution. You just buy it and start accepting donations, dress as a pope and tell the stories, etc. Does it work this way?

Now some food news: People discovered that most of the “Rossia” (Russia) chocolate bars are flammable and burn like a good piece of plastic. “Saw this on Internet decided to try myself”. The real question is what does burned chocolate taste like. Video is above.

Does your mom know how to makes photos on the smartphone? 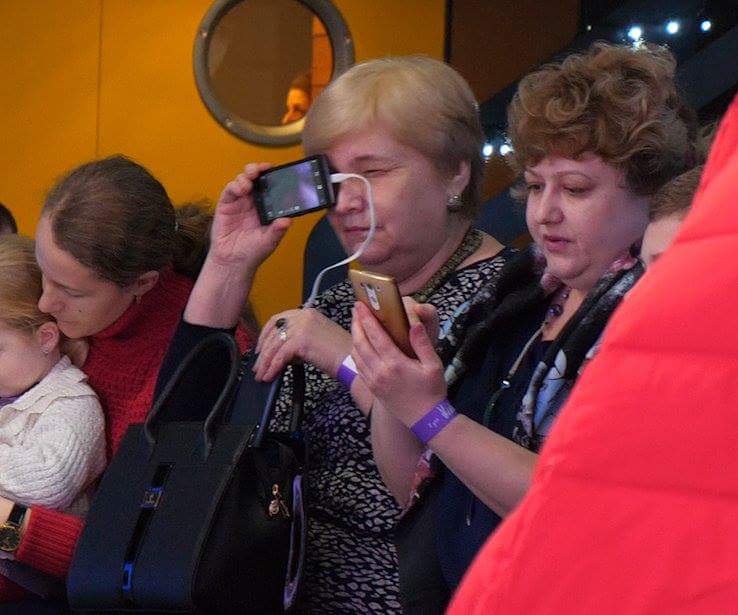 Because this lady apparently doing it wrong. 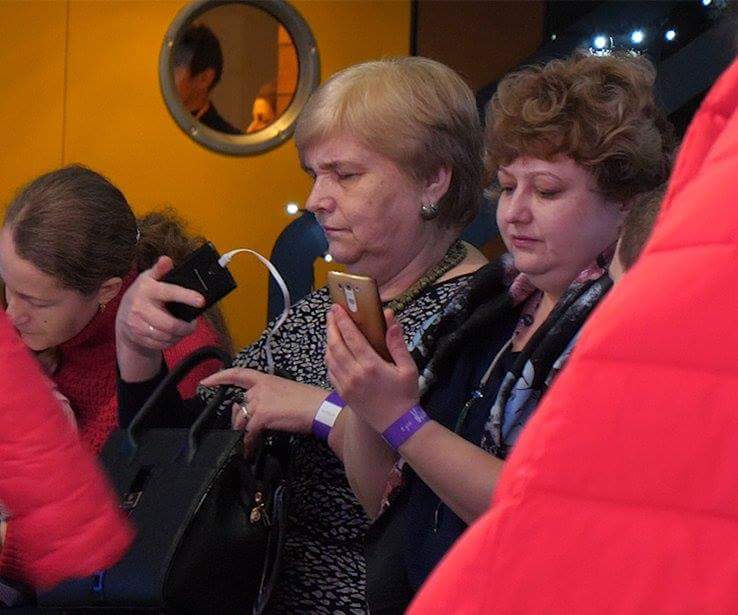 If you were wondering why computer classes for seniors was still a thing. Or might be a new break thru in technology?

If you ever wondered why you need a luxury SUV in Russia then here is one of the answers, the video above. Two sheets of paper under the thing a clearly gonna help. And again the real question how do they going get it out?

…and talking about Land Rovers here is another story: 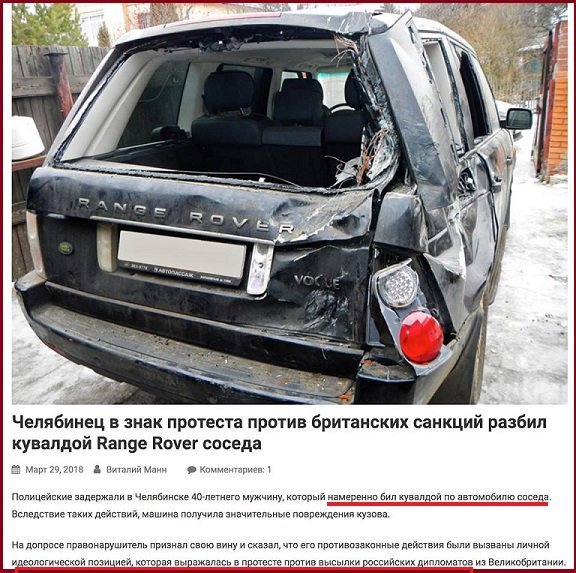 To protest against the British sanctions against Russia man has crushed his neighbors Range Rover with a sledgehammer. He intentionally was hitting the car of his neighbor to show his position against expulsion of Russian diplomats from UK.

…and talking about diplomats.. 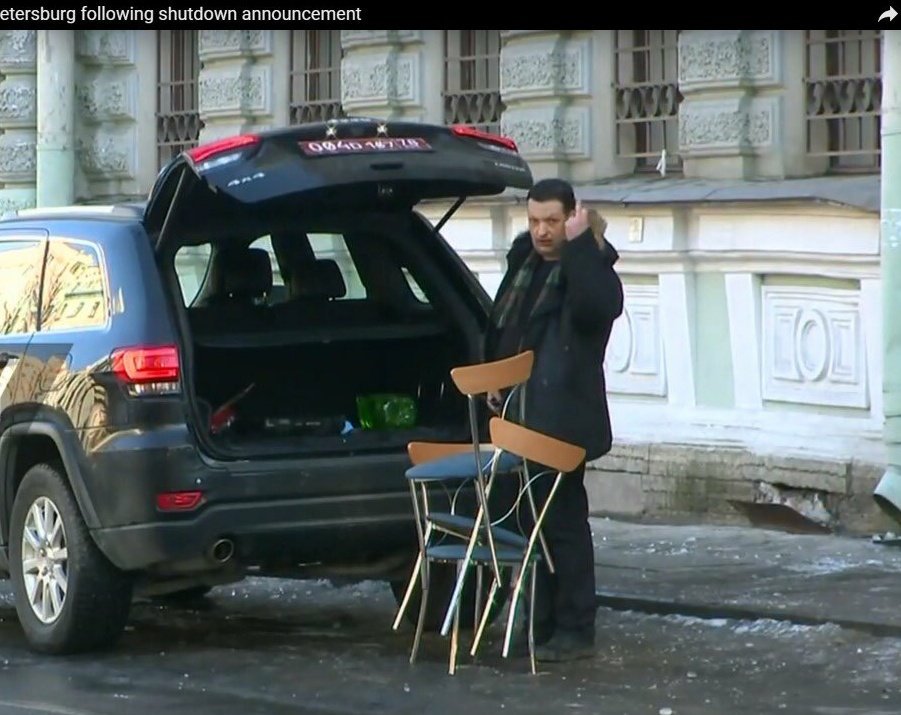 US consulate in St.Petersburg was working since year 1972. Survived Cold War and USSR collapse. Now is being shut down urgently. After that twitter poll, you remember? We had it mentioned here.  And on the photo you see a US consulate worker taking his belongings from the building, flipping a finger at a photographer. 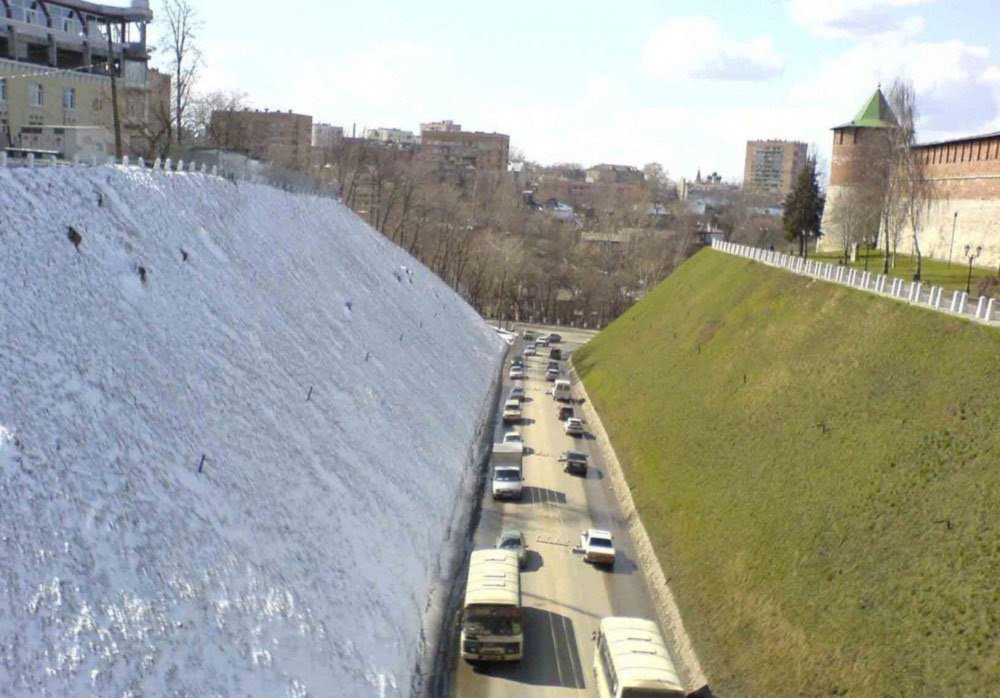 And to get less political, take a look at a wonder of nature in Nizhny Novgorod. This road has hills on both sides and in spring one (probably facing South) is totally summerish already and the other (Northern for sure) is very well still living in winter. This is Russia. 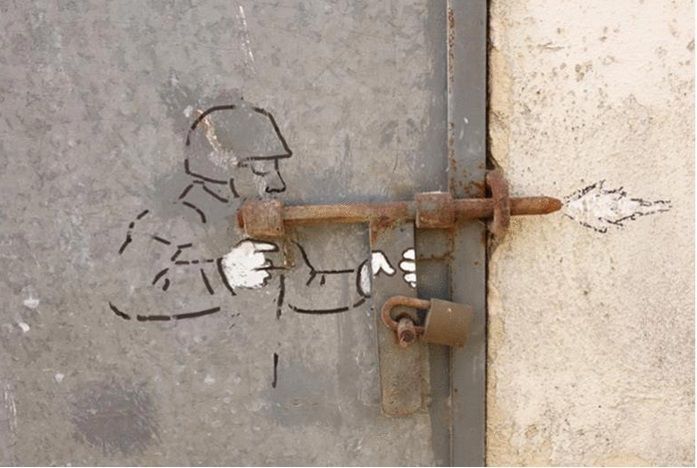 Another piece of a nice subtle but very clever street art. 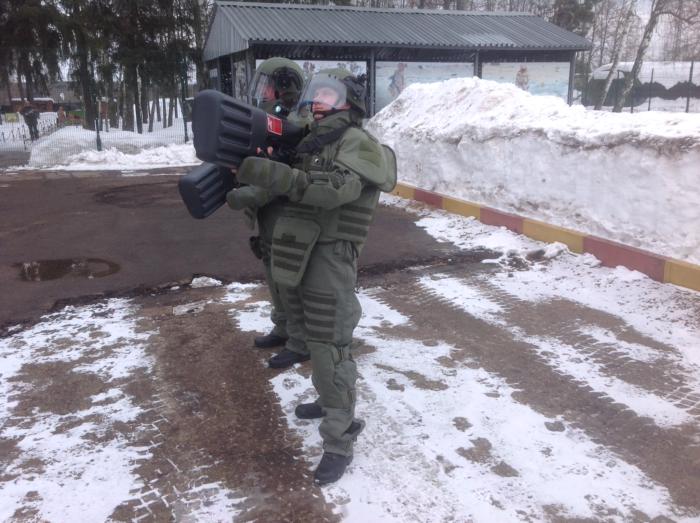 Do you know what this dude is doing? This is not a fantasy Ultramarine soldier. Neither this is fantasy at all, this is a soldier in special protective suit with an anti-drone gun. Call him “toaster” as he probably use some high frequency waves to jam drones and that’s why he needs so thick protection on him. 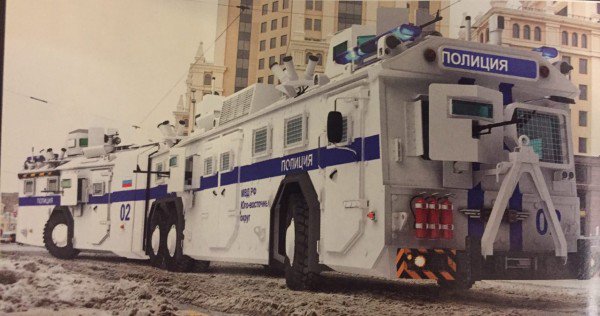 Also speaking about futuristic stuff which is a reality now, here is new Russian police truck is straight out of the movies except it is real. Our police take our people serious. Needs more machine guns though.

In many countries wearing a light-reflecting vest is a must when you exit your car on a roadside for emergency etc. And here is a social ad for this reason. Probably most weird “wear your vest” ad you could ever see. Video is above.

By the way there was another big fire today in Russia. One of the biggest Russia sawmills is on fire today near St.Petersburg. That’s sort of weird –  after that deadly mall fire now it’s almost everyday some bigscale burning is happening. Since most of this information you are reading in our daily reports come from English Russia official twitter account, we wanted to explain you a difference between Twitter and Instagram in one easy pic.

Remember that “Marvel – baldest crossover meme?” it’s not dead yet, and Ukraine is heavily contributing: Marvel: “Infinity War is the most ambitious crossover event in history” Who is the girl on this pic? She is a finalist of the “Most beautiful flight attendant of Russia” pageant winner. Her name is Yana. A few days ago Yana was stopped behind a wheel of a stolen Mercedes Benz. Russia is nice. Also Russia is nice in winters. And St.Petersburg this winter was reminding of some retro futuristic computer game set. Is it Bioshock or more like Dishonered 2? Or a Tsaritsyn map from Battlefield 1?

And that’s it for today folks. Have a nice Easter if you celebrate. Don’t get pranked to much for April’s fool.

If you look what else to read, then we posted today a story about boys who trespassed to the high security Soviet/Russian cosmodrome Baikonur, evaded police patrols and climbed inside abandoned Soviet gigantic mills there, even managed to climb into a real Buran Soviet space shuttle. Also saw the rocket launch upclose. Many photos, much wow.

And also here is our previous daily report if you want to read it.