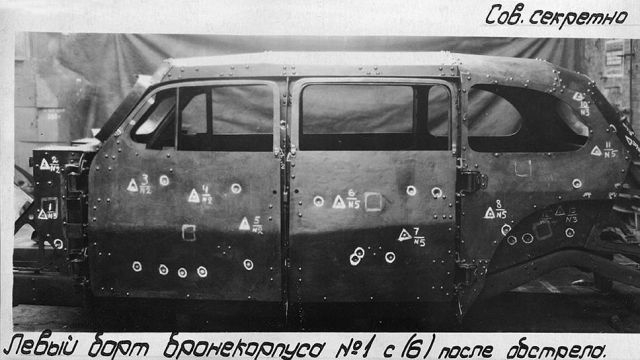 In 1940s Soviet leaders felt the need to get their own armored vehicle for their personal safety. Before there were no such vehicles being produced in USSR. After the first ones were built they had to test it for the bullet shots and other types of influence. Of course the results of those tests were protected from the public and confidential with “top secret” on top of them – so that nobody could know the weak spots of the vehicles. Here are the photos now unclassified. They took Soviet ZIS-115 vehicle and turned it into an armored car. It was used to protect leaders of the Soviet states. The insides of the car was an armored capsule which was then covered by regular cars parts so it could look like a normal ZIS car. This photo above shows “right side of the car after shooting rounds”. “Top secret” written on top. Windows could withstand bullets too. Hope you liked those photos.