Today is the 100 year anniversary of the Great October Revolution (as it was called in the USSR) or the 1917 October Revolution. Here are some first-hand witnessed depictions of events of that time by the painter Ivan Vladimirov, who used to work in the Tsar Police department in Petrograd at that time. 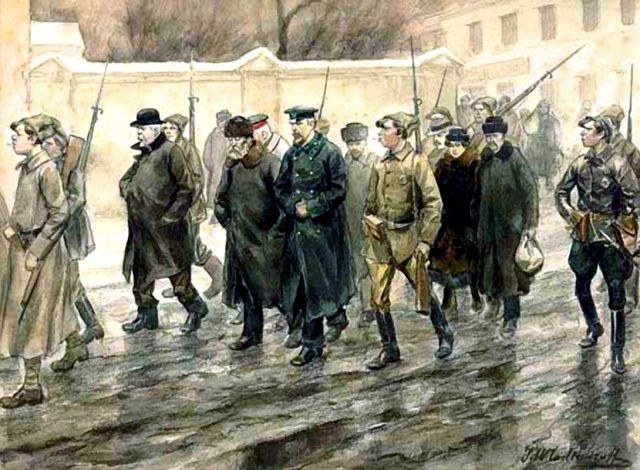 Peasants carry things that were probably looted from the houses of rich people who are no longer protected by the old laws. An old army officer and some other people with pots of hot water or soup. A new “master” passes by on an automobile. Probably a scene of the looting of the home of a rich peasant. Reading aloud propaganda materials about the new power. The person in the leather jacket is holding a portrait of Trotsky in his hands. Trotsky himself would later be executed in Mexico. Aristocrats try to escape Russia by boats, but there is not enough room for everyone so they forget their manners and stampede. A church is being looted. Old grannies are probably trying to protect it, but the soldiers don’t listen to them. Portraits of old nobility being burned. Monks and priests now are forced to work, not just preach and collect donations. People were easily shot by the new power, in their thousands. Old nobility members were evicted from their mansions and large city apartments, they had to carry some of their belongings with them. Many of them had never done any real work. Some people greet the new power, some don’t Kids breaking statues in the private park of a rich man, now unguarded. Another pair of people are brought to “trial” in a ransacked mansion.

Those were the times!