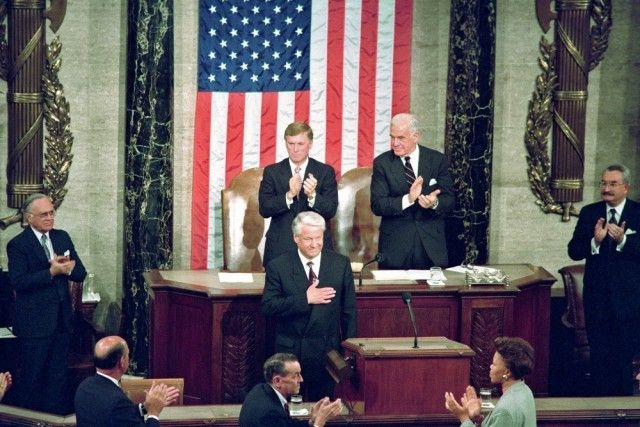 These are the series of events that happened in Russia and some other ex-Soviet countries in 1992, twenty five years ago. Starting with a Boris Yeltsin giving speech for both houses of US parliament, June 17, 1992. Special stores opened in Moscow selling goods only for foreign currency and not for rubles. Great variety of goods there. 1992. Minsk, Belarus, just a woman with a lot of bags. Also gas shortages. People line up at gas station for refuel their tanks, 1992. Mikhail Khodorkovsky, head of the company at time. Later was jailed for almost ten years. 1992. Gangsters from one of the rising gangs caught and lying in police lobby before the interrogation. Moscow mayor and Moscow goverment chief, the next mayor of Moscow during winter swim. 1992. Meetin on a city square in Tajikistan, 1992. Transdnistria militia fighting against Moldova in 1992. Yeltsin and Moldavian president signing a treaty regarding TransDnistria. Also military conflict was taking place on the border of Armenia and Azerbaijan as soon as they broke from USSR. 1992.

3 thoughts on “Twenty Five Years Ago in Russia and Beyond..”