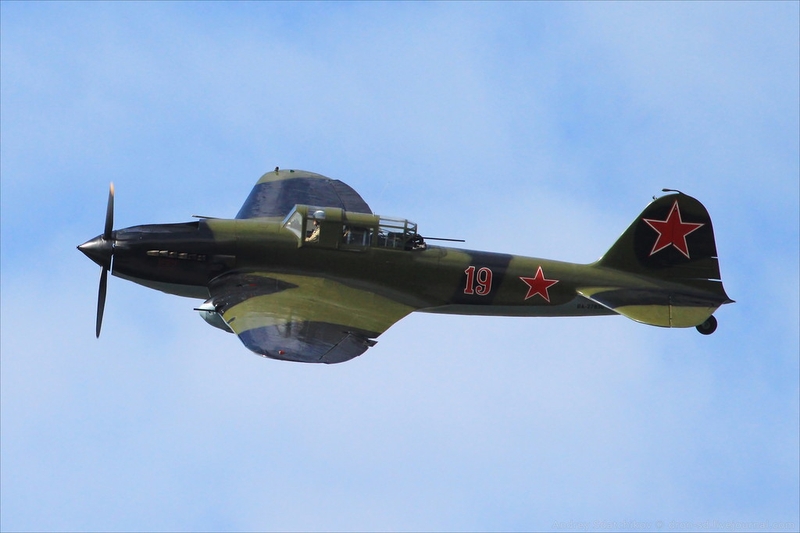 This year Moscow air show had one cool exhibit flying. This was an IL-2 World War 2 plane that is over seventy years old now already! Sixty-eight years it spent on the bottom of the lake, approximately twenty meter deep. And it seems unbelievable after that many years it could make it again to the skies. This particular airplane was serving in Soviet Northern Air Force of Navy division. It’s home base was near Murmansk city. This particular plane was throwing “jumping” bombs to the sea. Those bombs ricochet from the water surface and hit ships. It targeted that German ships doing re-supplying voyages from one port to another without going to the open seas. On November 25th, 1943 sixteen IL-2 planes together with some Pe-2 bombers and guarded by fighter planes went on two missions. They went to bomb two airfields – Hebugten and Luostari. But because of the bad weather during the first mission they couldn’t hit the target and one plane got lost. Then weather became better and they went to hit targets again. For the sublieutenant Vladimir Gummenni this was only third flight. For his air gunner this was only second flight. This is theirs plane we are seeing now seventy years later in Moscow skies. Nazi Germans knew they were coming so they got over Messerschmitt Bf.109 fighter planes into the skies to repel Soviet attack. A great air battle has begun. No less than ten Nazi fighters didn’t even have a chance to get in the skies and were destroyed on the ground according to the report.  Five more Messerschmitt Bf.109 were downed by Soviet IL-2 planes. Eight more Nazi planes were destroyed by guarding Soviet fighter planes. However Soviets also got losses: six IL-2 planes were lost and five fighter planes. The pilot of this plane downed two Messerschmitt Bf.109 planes, despite little experience of air battles. His air gunner downed one more. Probably they were risking too much. Their IL-2 plane got hit. Because of the damages they got in the air battle their guns stopped working, and their gears didn’t retract. Air gunner Vladimir was wounded. While returning back to their air base their engine stopped working. They didn’t make just three kilometers home. They landed on the airplane “belly” on a frozen lake. Pilot escaped the plane and pulled off the wounded air-gunner. A few minutes later thin November ice cracked and airplane went into the cold waters. However they survived, as they escape ashore safely. The pilot worked in Air Force till 1946, then retired. He made fifty air battle flights in total, all on IL-2 planes. He received three “Red Flag” medals. This is his airplane you look at right now. It fought real air battles, it was downed by Nazi pilots. The search for the plane was initiated by the pilot’s kids. The story of their father about the frozen lake made them want to act. They reached out to the fund that works with such cases. And then in 2011 the plane was discovered at around twenty meter deep in Krivoye lake near Safonovo-1 village, Murmansk region. Cold water of the Northern lake, absence of oxygen, rather deep position in the lake all this helped to preserve the airplane in very good condition. Only the tail section of the plane, which was made out of wood, wasn’t saved till our times. IL-2 was lifted from the lake bottom and sent to repair shop in Novosibirsk – 5,000 km away from Murmansk. Modern day “IL” corporation helped with repairs too. June 16, 2017 the restored plane made his first flight again. The Russian Siberian Institute for Aircraft Studies principal was a pilot himself. This is the second IL-2 they try to restore. First one was shipped to America, to Flying Heritage Collection in Everett, USA. IL-2 planes are the symbols of Great Victory as they were fighting at every front of the war. And its unbelievable that the most mass produced plane in the world has now only two flying units. A few years ago just one flying IL-2 existed, the one they made for the American collection. So this is sort of a little miracle and you witnessed now it too.