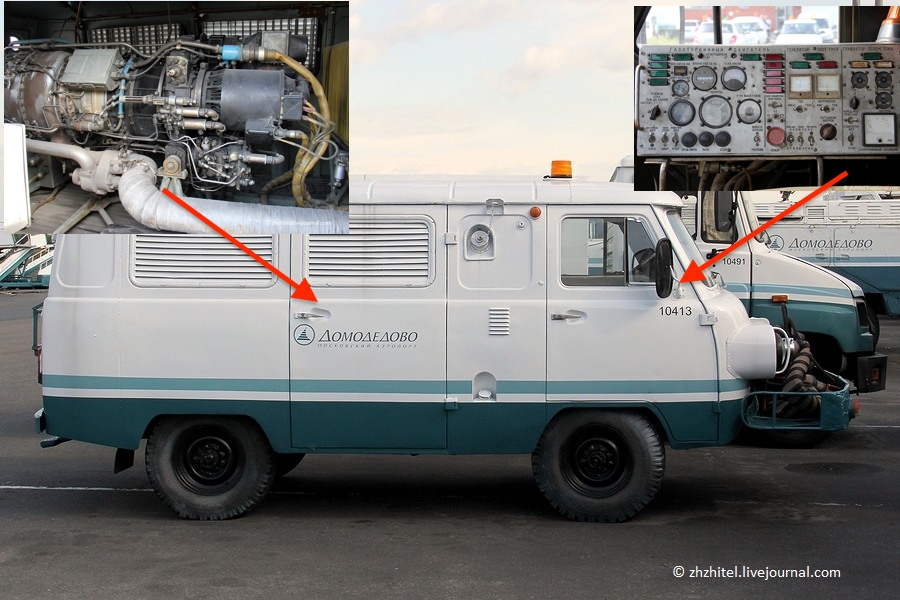 What will happen if you install a jet plane engine into a small Soviet (Russian) van? You probably would picture a race car that make a speed record somewhere on a salt sea. However it is not also this. Look at this picture – inside this van there is a jet gas turbine engine is installed in it. The same one that airplanes have. Russian blogger Zzhitel went and inspected this car up close. First that you can see and what differs this car from its “normal” brothers. Also attentive readers can notice a double filler hole on the side of the car. The lower one, is normal for those cars, and also another one on top. And here is the moment of truth. Door gets opened and you can see inside. There is a huge external engine indeed. Behind the driver seat there is a huge yellow fuel tank. After the fuel tank you can see some part of the engine. It’s not an engine itself yet. Here, this is the engine. It occupies the whole van inner space. What does it doing here? Maybe it’s just carrying it from one place to another? No. The engine is obviously connected with numerous wires and hoses and can start itself. So somebody wanted to set a speed record on a Soviet van? Also no. Let’s take a look inside the drivers cabin. To the right from the driver seat you have this crazy dashboard. It has many different Soviet buttons, lights and scales on it. Looks like it’s saying something about generators also. So does this van is using his jet engine to generate electricity? Not really, it would be only a madman probably who would build such a complex thing just to generate a few kilowatts. This van is made for some more important tasks. Everybody knows passenger jets have got a few engines to be able to fly. Most of the contemporary jets have the engines installed on the wings. Usually plane got two or four engines, like Boeing-747 or giant Airbus-380. However, planes got not only their main engines. For the inner plane systems to function while it’s landed, like air conditioning, hydraulics, electicity etc. planes can use their main engines. However it’s very expensive to use the engines for this, as they “eat” too much jet fuel. So passenger jets got smaller engines installed in them. Usually they are in the rare part of the plane. Do you see that black area on the back of the plane? That’s where it is. You can see a heat going off this engine. Can you see the air being distorted by the exhausting hot gas? Almost all modern passenger jets got those small engines to feed energy to their inner systems. Also they are used to start the main engines. Next time you see a passenger jet – take a look and try to locate its smaller hidden engine – you’ll be able to locate it easily. But why you can’t use some regular generator or battery set for this needs on a plane? Of course because of a huge power consumption plane does. For example to start main engines they need to be blown by a stream of a compressed air and those smaller engines provide it. Also all ventilation inside of the plane is provided by this engine. Now we are getting back to our van. See those hose it has on its nose? In case the small engine on a passenger jet gets broken and you need to heat up the plane fast in winter, or get electricity to it  this van comes to rescue. And it doesn’t go fast by the way, just 30 km/h. Firstly because there is a speed limit in the airport (yes it works and stays in airports) and also because of its huge three ton weight thanks to engine inside. So if you arrive to Russia next time and would see this small strange car outside your plane window, you will know it’s some very important little car out there.

Also a fun fact this engine he carries can work from -50 C to +50 C degrees weather outside.

Big thanks goes to Zzjitel, his livejournal address is here: