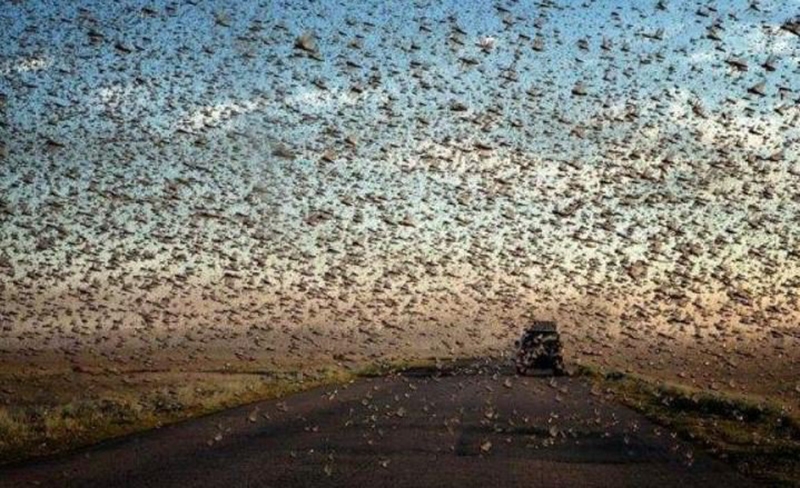 Giant swarms of locusts attacking South of Russia these days. It all started in Dagestan but started spread across Russia fast. Now it is in Stavropol region, Kalmykia, Buryatia, Krasnodar and more. It eats and destroys everything it meets on its way – cereals, vegetables or just regular grass. More photos and videos inside. Most Southern Russian regions like Stavropol and Krasnodar, bordering Caucus Mountains got hit by locust a lot. Some say that the reason for this is because the winter was too mild and soil didn’t freeze deep enough so the locust could germinate in enormous amounts. Then, Russian farmers and authorities didn’t see it coming and wasn’t reacting fast enough to beat invasion in its initial form.

See the video from Dagestan, Russia. The action starts in the middle of the video. Little by little even little swarm of those insects turn into a huge gang when the locusts start to fly and spread they eat acres and acres of greens. Then each locust can put up to 300 larvae into the ground. They stay at 15-20 cm deep. You can’t see them and you can’t spray poison for all the fields in the region. So best way to fight them is when they are born but can’t fly yet – at least  they are visible and you know where to funnel your effort.

Here is another video. Those are Moroccan locusts. They widely spread from Canary Islands to Afghanistan. Now in Russia too. These particular locusts are very voracious kind of locust, also very prolific and can migrate on great distances. Big locusts can fly sixty km (40 miles) a day and their speed is more than 10 meter/second. They can get up to 300 locusts on one square meter of soil. This year invasion is also connected with weird weather Russia is experiencing this year. It had very hot spring in Southern regions which is very good for locust. Locusts attack fields and eat crops at tremendous speeds. Hundred square kilometers of fields become empty in a matter of few hours. Each locust eats every day amount of food which equals its own weight. Keeping in mind that the swarm can have millions of them then you can imagine how much food they need.

Not only farmers being hurt by the insects. Drivers often have to drive in very bad visibility because of the locust. The driver says in the comments to this video that the swarm of locusts ate all crops on one side of road and moves to another side. When it was up in the air they covered up the sunlight, making it look like its a dusk outside. Locusts are professional long range travelers. It can fly long range, eighty km or more per day, but is very energy efficient. It flaps its wings very precise so its alway controls its flight.

According to the Bible locusts were the eighth plague for Egypt as a punishment for not letting the jewish people go. Can this be a punishment again?