MAZ – abbreviated from Minsk Auto Zavod (Minsk Auto Factory) was founded in Minsk, Belarussia, USSR in 1954. It’s known for its normal trucks, but besides the regular trucks it was making some of the most interesting and weirdest trucks in the world. How about a 12×12 truck with a helicopter engine and 24 custom electric motors to turn each wheel for example? 1. At first newly founded factory was making wheeled tractors. First one in particular was this MAZ-528 tractor. It was upgraded a few times and the final model was pretty cool: it could move thru swamps, climb steep inclines. It was equipped with different machinery to cut trees, dig trenches, move dirt around and many more. 2. Then in 1956 on base of that tractor they decided to make a.. truck. So it was one of the first of its experiments – to take a tractor and make a truck out of it. Tractor-truck hybrid. Then this MAZ-529 was born. It’s frame was not stable and could change its shape.

3. Then shortly after they made a tank truck based on same car, and called it MAZ-529. It was also boasting very high passability thru all types of terrains. 4. Same time Soviet army noticed their efforts and ordered a cross-country truck for themselves. So they made first biaxial truck  – MAZ-535. It was full-wheel-driver, kind of 8×8 drive and was planned to be used as an artillery tractor. Later it was converted to transport first Soviet rockets. MAZ-535 was a very advanced machine. A lot of elements previously not used in Russia were installed there: semi-automatic transmission, hydromechanical transmission as well, wheel pumping on the go system and more.

Again it had very high off-road capabilities, could pass streams and small rivers up to 1.3 meter deep or move on the 30 degree slope. Also was very durable. It was produced for six years from 1958 to 1964, first at Minsk, then in Kurgan, Russia. It was called “Cyclop” for the headlamp in the middle of the car “face”. And then they upgraded it to MAZ-537 version and in this disguise it was in production up to the Soviet Union started collapsing in 1989. Those MAZ-537 trucks are still widely used in Russian and other Ex-Soviet armies to transport rockets, tanks and more. 5. Then with the rise of ballistic rockets Soviet Army was in need of a transport that could carry them. They came up with a new MAZ truck – MAZ-543 8×8 truck. They were equipped with V12 engines with whopping 38.8 liter engines which gave out 525 horse power. First truck was made in 1962 but it was only 1965 when they showed it at Red Square parade. 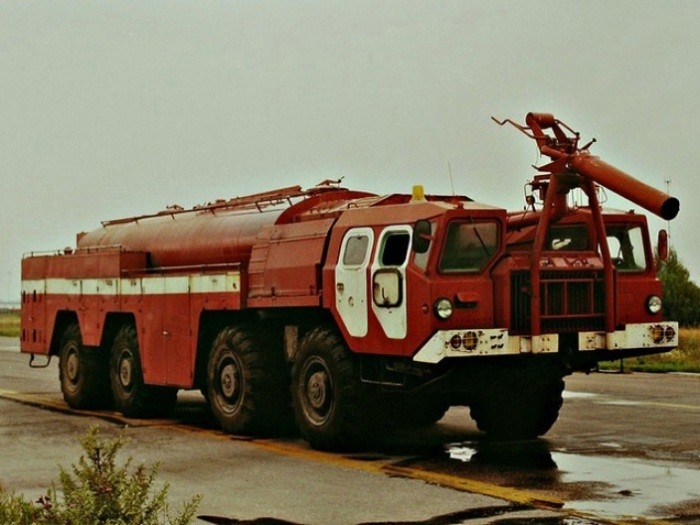 Also some fire trucks were made on its base. Just imagine – a ballistic missile carrier also used as a fire truck. They were very capable thanks to their V12 engines and could carry 20 tons of load, tow a 25 ton heavy trailer and run at 60 km/h speeds. They also were used for other purposes in Soviet army, for example as portable radar systems. 6. Then as the size of the rockets and their range was growing the need for larger trucks was emerging. So first six-axial 6×6 full wheel driver MAZ-547 appeared. It was made to carry “Temp” and “Pioneer” Soviet rockets. It had fully automatic transmission and tires that could change its pressure. Thanks to this the huge machine could move in the conditions of fully absense of any kind of road despite its 27 ton weight and 16 meter long.  It could carry 62 ton payload and move up to 40km/h. The fuel economy for those cars was crazy: 260 liters per 100km or 0.9 mpg. The crew of the car consisted of two people seated in two separate cabins. Driver was in the left, rocket launch crew chief in the right. 7. Then rockets became even more bigger and Soviet engineers from MAZ factory came out with their super-giant – MAZ-7904. It was supposed to be used for intercontinential ballistic missiles. During the Cold War it was moved out of the hangar for testing only when they were sure there were no enemy sattelites above.

For many years it was considered to be lost, but recently one working specimen was found near the Baikonur space launching site in Kazakhstan. 8. Then in 1985-87 Minsk engineers came out with a real life truck “centipede”.  It was made to carry Soviet “Tselina” missiles. Meet twelve axial MAZ-7907. Only two of those were ever built. It was probably the only full-driver 12×12 truck in the world. It was powered by helicopter-like gas-turbine engine which gave 1250 hp. Then all this horse powers were used to convert into electricity and then there are 24 electric motors, each of them spinning its own wheel. So its sort of a hybrid truck. Thanks to the sophisticated control system each wheel could be turned for its own custom angle. In order it could move backwards it had a TV camera installed which aired picture to the driver. And it’s all was back in 1980s. However because USSR ceased to exist and “Tselina” missile project was abandoned, this monster truck was also discontinued.

After that no more wonder-trucks were made at MAZ. Now it’s not in Russia but in Belarus, and Belarus doesn’t have that much ambition or means to fund such projects any more.