Every issue of the mag tried to predict how 21st century would look like. Here are some of the predictions. Let’s start with the earliest magazine issues and gradually move forward to late 1970s to see how 21st century predictions changed as 20th century technologies evolved. In 1933 there was a first issue of the magazine. Here it’s first prediction, of course it was a flying car. In 1933 it was thought to be like this. Soviet cities of the future had to be placed beneath the Earth surface.

Authors of the magazine dreamt of elevators that would bring people down to the sea bottom. This was a prediction for the first phone answering machine. Those are planes of the future. There was a plan to plow Soviet fields with mini-bombs. Like plane dropping very small bomb shells to plow the field. Enemy airplanes planned to be destroyed with a resonance weapons. Enemy tanks planned to be destroyed with a hidden electro-magnetic field generator placed under the battle field. There was a prediction to build a huge sphere in the arctics and live there. This sphere could also be swimming in the water if the ice beneath it melts or cracks suddenly.

To move across the arctics they planned to use aerosleighs that also could float on the water.

Or semi-submarine ship could do too.

Special on ground stations planned to send electricity via electomagnetic waves to the electrical airplanes! This dirigible or blimp was planned to generate electricity by capturing energy of the wind and send it to the ground. A balloon suspended airplane to explore higher levels of the atmosphere. 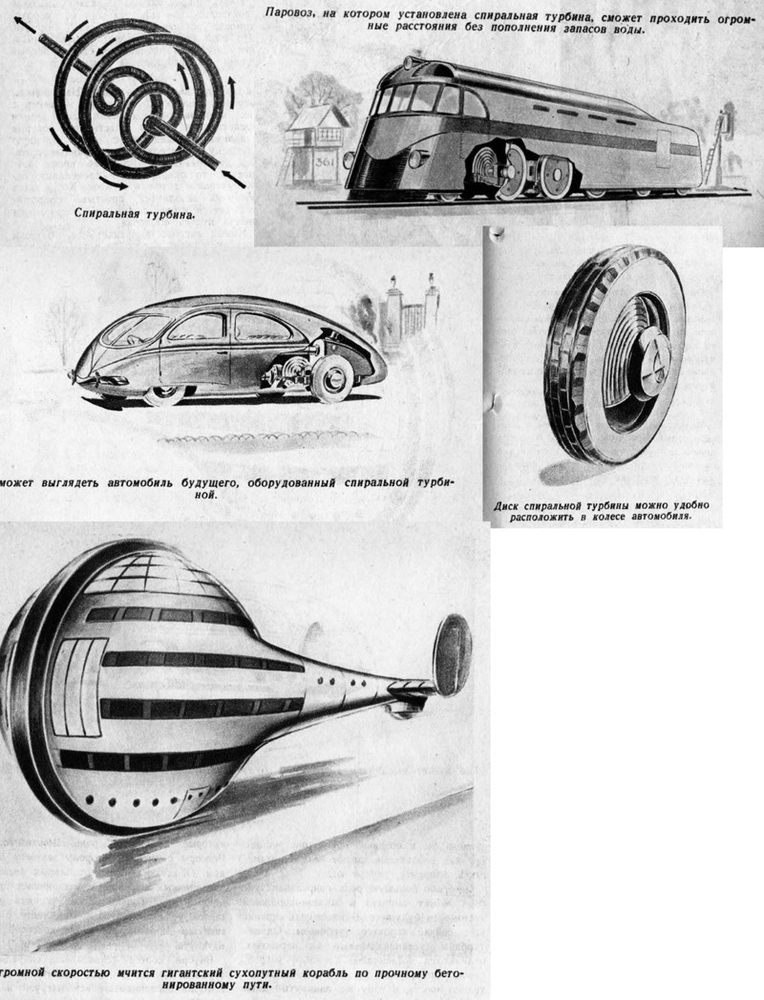 “A new type of steam engine would allow trains, cars or land ships can go fast and for long distance. You even can put this turbine steam engine inside a car wheel” “Electrical gyroplane can feed from the trolleybus electric lines” Supersonic jet with nuclear cell can stay in the air for months. In 1944 they already predicted that soon an artificial Earth satellite would appear. “Orbital space station” was predicted in 1950. Starting from 1950s the magazine covers became more and more colorful and exciting. Moon bases were planned to be built. Monorail transportation of the future. A future city that would look like a mountain. “Soviet mountain city would fit 55 million people inside”.