On this day, seventy-six years ago, Hitler started his invasion of the USSR. June 22, 1941, 4:00 am in the morning, Nazi forces crossed the Soviet border and started moving into the Soviet state. Airplanes were bombing major Russian cities and airfields. Nazi troops occupied cities and villages. They say the army and the people of the USSR were not ready for this war. It was very chaotic everywhere. Here are some shots taken around the USSR during the first days of that war. 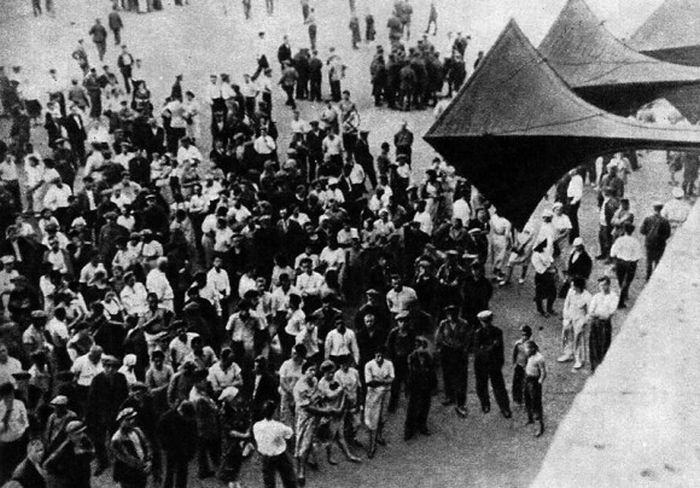 Soviet citizens listening to a government announcement about the Nazi invasion. Many of these people won’t be alive after the next four years of fighting. Vladivostok, 9,000 km away from the Nazi invasion, people were still shocked to hear the news. Soon they would be attacked by Japanese forces, too. The first Nazi casualties of the invasion. The same day, 22 June, Germany already lost some troops to Soviet soldiers. Soviet – Polish border marked by this river. Nazis preparing to cross it, 22 June 1941. First prisoners of war – Soviet soldiers captured by Nazis in the first day of war, 22 June 1941. Nazis building their first trenches in the Soviet soil. People started fleeing their villages the same day as the invasion started. Nazi soldiers in a Soviet village. Burning the houses of Soviet people. June 1941. Leningrad factory workers listening a radio announcement about the war. People on the street read the latest news from the front, July 1941. Workers of the Soviet factory discuss the latest events. Actors from the Malyi Theater in Moscow get lessons in the civil defence. July 1941. First soldiers go to the front. Most of them would be dead in just a few days. They are still optimistic and want to liberate their country.

Total casualties of Soviet people in World War 2 is considered to be over 20,000,000 people.

56 thoughts on “Today, Seventy-Six Years Ago First Days of Russia in World War 2”