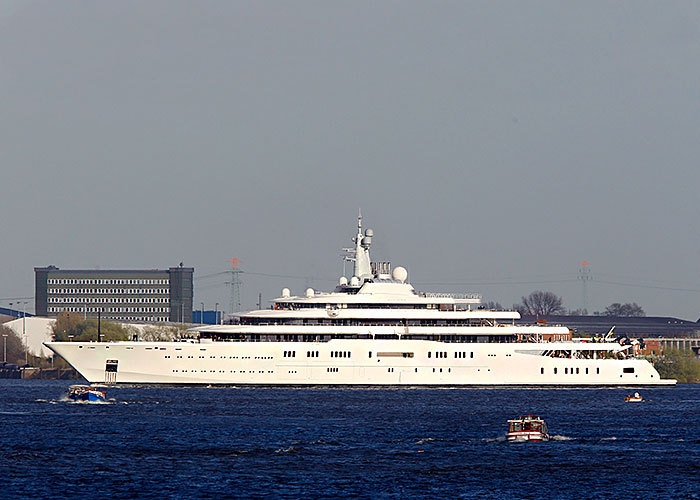 Here is a collection of most expensive yachts of Russian billionaires. And first of all here is the most expensive among Russian yachts – “Eclipse”. It belongs to Roman Abramovitch. This thing is very expensive and huge. It’s 162.5 meter (500 feet) long. They say it costed him $1.2 billion! It has a SPA centre, carries helicopter and has a full size pool. And it maintenance is expensive. For example just one fill up of the tank worth $600,000!    For this reason he rents his yacht away to cover up some of the expenses. Also “Eclipse” yacht got it’s own personal mini-submarine.

Let’s see some more of those: Dilbar of another Russian billionaire. They say it’s less expensive, around $600,000,000, however it’s more spacy with her six decks and has two helicopter pads. It can host 40 guests and a crew. Has it’s own private restaraunt. Le Grand Blue. This boat has a rich history. Was built for an American enterpreneur, later was bought by Roman Abramovich (remember that first yacht we had?). Later it became “too small” for him and he gave it as a gift to his friend, another Russian billionaire and his partner Evgeny Shvidler. Because it’s cheap – just $100,000,000, so he could afford such a present, being worth of around $15 Billion himself. This boat carries two smaller boats just in case you want to move around and a helicopter. Sailing Yacht A. It’s a state of art boat isn’t yet delivered to her owner. He wanted them to build biggest sailing yacht in the world and they made it. It’s 143 meter long and has a crew of 54 people. It was already spent $400,000,000 to build it. He is planned to get it soon, this spring. And a LUNA yacht. Believe it or not, but it belonged to Roman Abramovich too some time ago. It’s a unique design boat that can travel even in Arctic waters and is a biggest yacht of such purpose – they call them “expedition yachts” – biggest in the world “expedition yacht” it is. They say Abramovich sold it to his friend for $400,000,000.

And that’s it folks!

3 thoughts on “Most Expensive Yachts of Russian Billionaires”