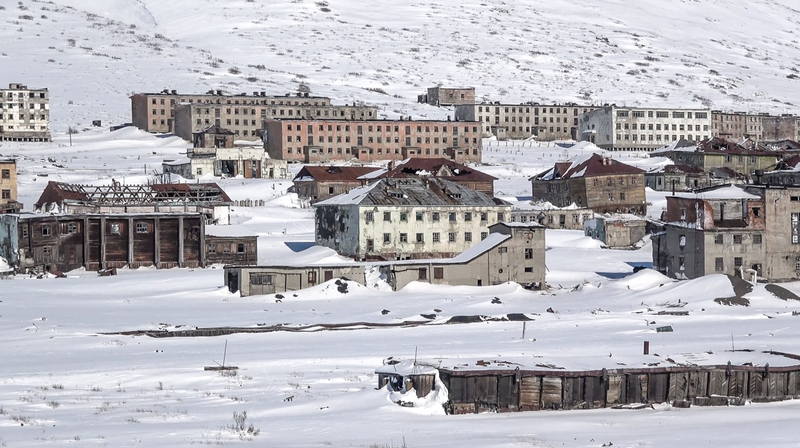 This town Gudym is just 200 km away from USA. Probably this is why it was used as a top secret warehouse for the nuclear weapons. The heart of the town is a huge concrete hole in the ground that used to store nuclear weapons. The surrounding houses were used for the families working on this underground object. Now everything stays abandoned. Houses sometimes burn in fires, and underground maze is used by strangers. We had some photos from here before, but Sergei, Russian blogger, went there in winter and saw how it looks like: A whole city is abandoned. If you don’t know where is the entrance you would never find it. Before trucks could enter here. And this crane was used to unload projectiles. Rails go thru all the maze. Everything of value was already stolen. This dolly is a two meter thick gate used in case of explosion to block the rest of the place. It weighs 20 tons and made of concrete. Tunnel is curved to reduce possible shockwave of explosion. It was built by same builders who made Moscow subway. But this is 10,000 km away from Moscow, 200 km to Alaska. Before all employees moved around on those small electric cars. This place has 12 meter tall ceilings. This is a most mysterious hallway in this place. It was protected by a few sets of very thick metal doors. That lead to a very small room. And it’s still a mystery what was stored here.

Thanks to Sergei for the photos, his website is below: