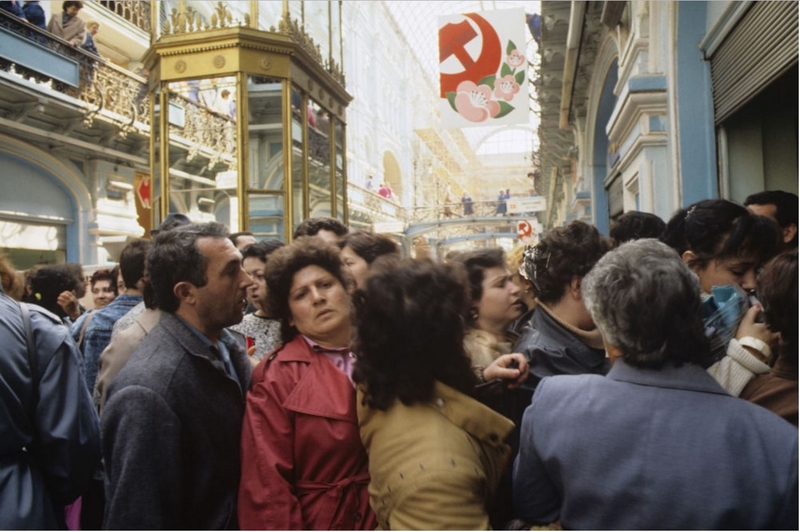 Lines in Soviet Union was something that called a sort of attraction that all Soviet people were taking part, often involunarily. People got used to the lines and took them for granted. Here are some photos of Soviet people standing in line for a good cause: Standing in lines to buy food Basically many people got used to spend their life in lines. And to buy bread. And of course long lines to buy meat. Some shops had special departments that you could order yourself food for some ocassion, like a birthday party, treat yourself with something tasty, but in order to place an order you had to stand in line too, like on this pic. So it was a sort of competition for some. They even maybe could feel themselves bad if they got something for free, without lining up for a long time. Then, in late 1980s and early 1990s when first capitalist shops and joints were open in USSR, Soviet people habitually started lining up their too. To buy jeans or.. Or even to get their first McDonalds. Like, this people lined up for McD opening day January 31, 1990, it was still USSR – not even Russian Federation. And people had to wait over sixÂ hours to get a burger. Sort of iPhone craze of these days. That was the line. For some reason they were given Canada flags. You see at the day how crazy it was there. Also, McDonalds had its own authentic Soviet flag on its logo. Who could ever think of this being reality? So lines were everywhere. Not just Moscow or other big cities. This is Dagestan for example. Sometimes people had to line up literary to buy bread. And it was rationed. Also lines craze was not only a food craze. To get a train ticket you often had to stand in line too. Or to fly away on Aeroflot plane – guess what? A line. Especially in Summers when all people wanted to visit their relatives or go to the warm waters of the Black Sea. Of course a lot of lines were to buy vodka. Markets had less lines as prices were much higher, but still there were some lines. And here is Novokuznetsk, Siberia, people line up to buy some cloths. And this is food shop in Perm Russia. And in Perm city again. And then again, first German bakery was opened in Moscow and people were here Â – we are ready to stand for some tasty german bun.

These days lines you can see only for iPhones or, like a few weeks ago, for some new trendy Kayne West $500 sneakers. Times have changed dramatically.

25 thoughts on “Lines in Soviet Union”