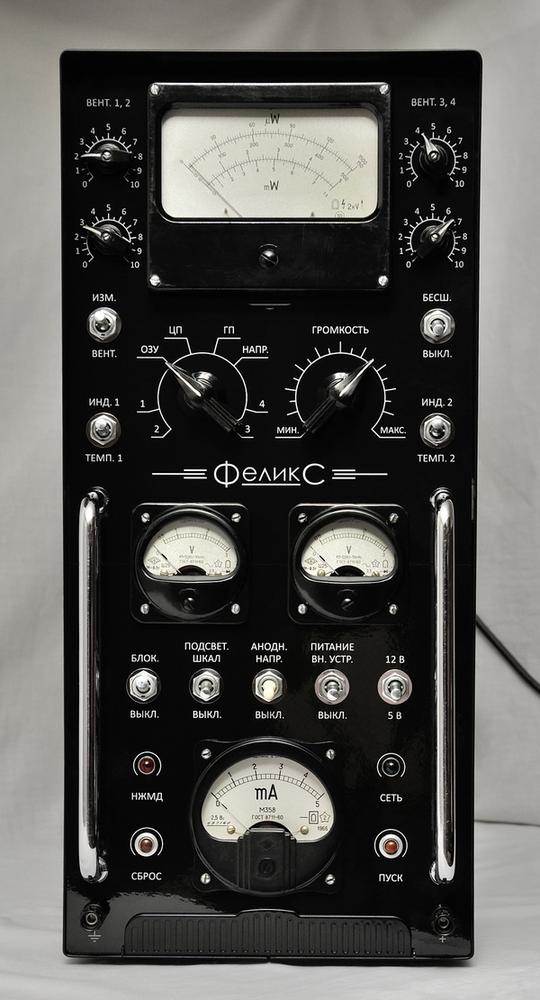 This Russian guy has a hobby of making different things from the remainders of old Soviet electronic and electric parts. He deliberately collects different old Soviet switches, buttons, small bulbs and indicators. Here is one of his latest works – a computer case made from all this old Soviet scrap parts. Looks very stylish: He called it “Felix” after a famous Soviet digital mechanical calculator. To create this casing he used parts from Soviet radio-electronic devices. He got them from Moscow institute which was making a renovation and throwing away full boxes of those. Some parts were in bad condition so he cleaned them up and turned into shiny new looking ones. And now the most cool thing that all those switches and displays are serving some function and not just for a design purpose. For example you can see how much free memory left on those arrow scales. Also the fan speed, processor temperature, processor load and more is being shown on them. With the switches you can choose which parameter is going to be displayed as well to turn on and off additional fans and more. Â Also a separate Soviet button for reset, on/off of the computer and lights of the scales. Initially Soviet scales were not designed to have lights in them, so he added the LEDs himself. This was his old casing that he used as a base for this new one. He says that the computer still can be further modded by removing the front panel and getting free access to the computer insides. To compliment this cool thing he also restored old Soviet microphone “Octava” which can be plugged now into a modern computer and be used for any purpose microphones are used.

6 thoughts on “Guy Made a Computer Out of Old Soviet Electronic Parts Looks Magically Cool!”