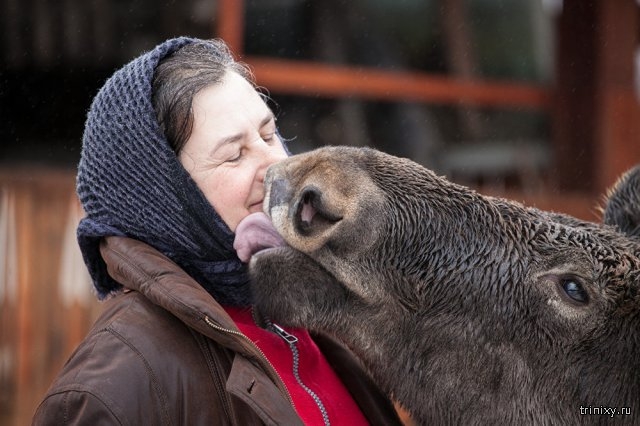 This woman has a moose as her pet. She got it from the hunters as baby when they killed the parent mooses and brought him to the woman. She was feeding it from it was a small cub, and now he lives with her and they have very friendly relationship. Let’s see: People didn’t believe the moose would survive. It was very weak and couldn’t move on its own. The moose, she calls him Grisha, could eat only goat milk. She had to feed him each two hours from 6am to 12am – whole day. Her village was very small and there was only one family with goat milk. So she had to travel to nearby villages to buy more milk to feed Grisha. In order to physically train an animal she had to walk him every day, around the village. With time being Grisha grew up and become strong animal and made friends with all local dogs. This dog is his favorite they like to play. Grisha likes to meet other people, fishermen, and ask treats from them. He likes breads, and he likes to listen how people speak about him. When he is lonely he comes inside the house to call for his owner. Hope you liked the story!

1 thought on “Woman Has a Moose as a Pet Grisha: He Plays with Dogs, Eats Bread and Likes His Owner”