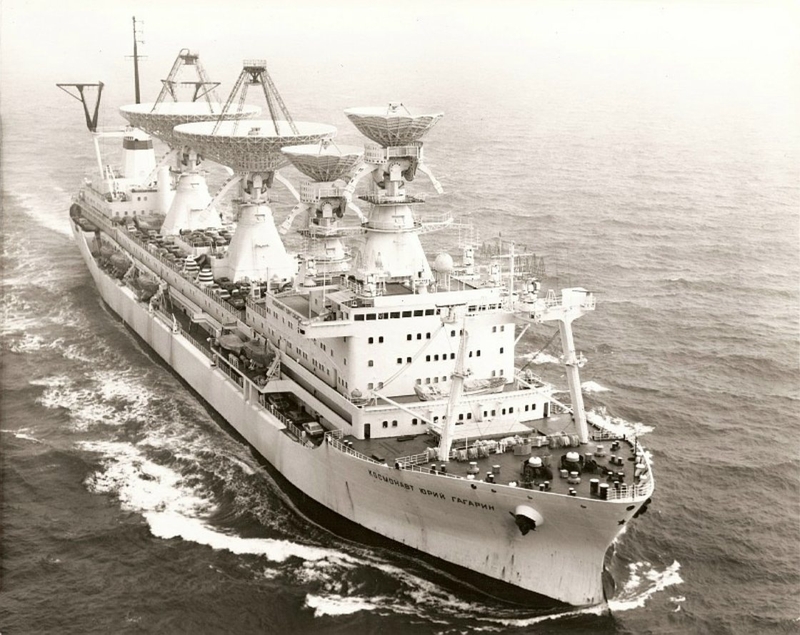 Yuri Gagarin was a Soviet science flagship. Was built in Leningrad in 1971. It’s 231 m long, and 32 m wide. Main engine has 14 000 kWt power. The crew is 136 people and also 220 scientists can travel and do their work. It has 1250 rooms, including 86 science labs. It was built to be able to communicate via satellites with all top important things in Russia.  It had served variety of tasks. Most mind blowing is to come to Pacific and track Soviet missiles that were fired from USSR to the middle of nowhere in Pacific. Also to support communication with Soviet space objects – MIR station, Soyuz spaceships etc., when the coverage from on ground stations is poor it could go to any place in ocean and stay there linking Earth with space. It has 75 antennas, including two huge 25 m sat dishes. It could support itself autonomously in ocean for over than 120 days. Main Ocean was the Atlantic Ocean. Let’s see more: There was a huge group of such space vessels. They were called “Space Fleet”. They were used to support anti missile strike against Soviet Union by communicating with satelites and detecting any possible threat from any point of the world. Also were used for civil works like MIR station. In 1960s Soviet Union fired many ballistic missiles right in the middle of the Pacific Ocean. Then four ships like this but smaller were there around and tracked everything how the missiles flew, how they landed etc. For the secrecy purposes it was called a “Pacific Hydrographic Expedition”. Then when first Soviet space rockets started flying they encountered problems with tracking and communications from the Soviet territory. The Soviet scientists decided to send those huge ships to Atlantic to be able to communicate and see the results of rocket stages separation from the ocean based laboratories. From sixteen  rounds of first Soviet space rockets around the Earth six of them were above Atlantics. So the ships were very handy. First they took the regular trade ships of USSR and put the dishes on them, before the real giant floating labs like this “Yuri Gagarin” were built. These regular modified ships were used even for the first flight of Yuri Gagarin. When Soviet Russia had its own Moon program they had to use as many as five of such ships on regular basis or they couldn’t send anything to the Moon.

And then when there was a second Soviet Lunar program in early 1970s they have built this glorious Yuri Gagarin ship. It incorporated all most advanced scientific and technological solutions Soviet state could get their hands on. In total they had already 11 ships like this with Yuri Gagarin being crown jewel amongst them all. There were indeed a lot of technical problems to consider. For example, when the ship turned its huge antennas sideways – like on the pic above – they became acting like huge sails. However in order to maintain permanent connection with space objects ship had to stay stable on same place – and if he had sales the wind was moving it, so they had to develop special systems that tracked the position of the ship and used the engines to keep it on one place and even don’t let it move from side to side. Because it stayed autonomously in the ocean for 4 month people had to be staying with comfort and this was a task too that had to be solved. The ship had its own garage with a few cars including this luxury Soviet Volga and exotic Soviet minivan “Latvia”. The cranes were used to lift them from the ship to the ground and back. Crew could drive their own transport wherever they docked. Also there were eight passenger elevators to go from one deck to another. Electric generators of the ship. Closed swimming pool on board. And the captain’s office. From 1971 till 1991 it had made over 20 expedhitions to Atlantic Ocean. Sometimes stayed there for a few months on one spot. However after USSR collapsed this one of the most impressive creations of Soviet science and industry was lost. After in 1991 USSR was splitted to diffrent states they all tried to get they share in the Soviet legacy. Ukraine got this huge and nice ship, not Russia. Ukraine couldn’t support it or simply didn’t want to spend huge funds on something it didn’t know what to do with. At year 1996 they simply stopped paying the crew its monthly salary. Crew decided they needed to survive somehow and started selling small parts of the ship to local black market in the port. Everything that could be unscrewed, stolen etc – was stolen and sold. Different scientific collections from museum, gifts from famous cosmonauts etc – were lost forever. Then in 1996, same year Ukraine hired an Australian company to recycle this ship. The proud creation of thousand of Soviet workers were sold as a scrap metal for a price tag of $160/ton.

When it went to its final destination  – a port in India where it was doomed to be recycled – they had to change the name from Yuri Gagarin to just AGAR because they were ashamed and didn’t want anyone to know how the ship that was beloved by millions was going to be simply scrapped. A lot of out-of-box solutions were used to turn the ship to an unique floating laboratory prone to outer vibrations and other noises. Now this ship is lost forever and can be still seen only on the photos and old videos. What a pity.