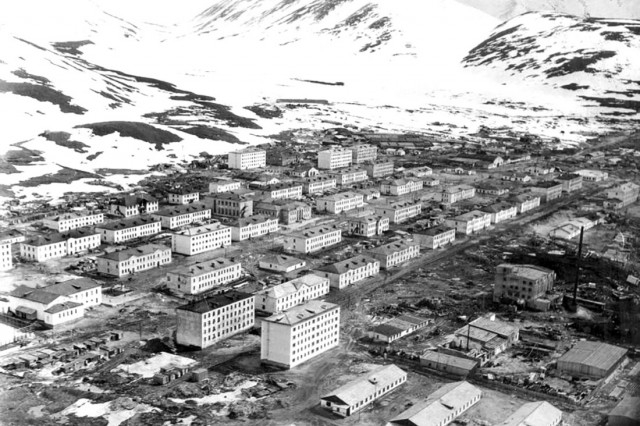 In the 1930s in the Soviet Union an active development of natural resources of the north began. Among the gray snow of tundra and walking reindeer coal, tin, gold, nickel, oil and molybdenum were extracted from the earth. A little later, the military joined a bearded geologists and miners: these little adapted areas were suitable for defense from attacks of probable enemy. After the collapse of the Soviet Union a lot of northern businesses and a significant number of military bases became unnecessary for the government. Along with the slaughters, shops and airfields towns in which their employees lived became abandoned.

In the mid-1930 s industrialization came to the Land of the Soviets. In different parts of the state at the same time they were built hundreds of large industrial enterprises. Most of the new industrial giants needed relevant raw material base â€“ there werenâ€™t enough of old resources found in the times of the Russian Empire, and many valuable minerals were not mined. Meanwhile, in the face of the deteriorating of international relations, when everything showed the coming of world war, development of new deposits becomes a matter of strategic importance.

In search of the desired “Klondike” by party and Comrade Stalin personally geologists climbed into the most inaccessible places. In 1937, in the north-west of Chukotka they found large reserves of tin, molybdenum, tungsten, lead. The nearby Mountain is called Iultin, the deposit and the village near it had the same name. Construction was made by prisoners, and the scale of development was such that, in addition to the settlement of miners, at the same time on the shore of the Bering Sea was built port for export production and a 200-kilometer road between them. Due to the beginning of the Great Patriotic War and extremely difficult natural conditions the start of Iultinsky mining and processing plant took began only in 1959. The nearby village has grown rapidly in a fairly large by the standards of the Chukotka village where residents have tried to create the most comfortable conditions. Iultin was completely cut off from the mainland, fresh food was expensive and brought here only twice a year, and an average annual temperature was minus 10 Â° C could only be loved by people with particularly hardened spirit. But on the other hand, a good salary, a great vacation, feeling of closed, but relatively tight-knit community, and a full infrastructure around with kindergartens and schools, a sports complex and the house of culture, and the health center allowed living a normal life even beyond the Arctic Circle. In the 1990 s mine was closed – mining became unprofitable in the new conditions. These businesses were a life of Iultin. This process lasted for several years, but the end was inevitable. By the beginning of the XXI century village, where more than five thousand people, was completely empty. Now Iultin is like a classic northern ghost town, where sometimes people appear: tourists who come here for the memories and the former residents. Unlike the unfortunate Iultin, Norilsk wonâ€™t have such fate, though the circumstances of their birth were similar in many ways. By the mid 1920 s in the north of the Krasnoyarsk Territory, 2,000 kilometers from the regional center, the existence of rich copper-nickel deposit has been established. Nickel reserves, the most important metal used in making armor for tanks and aircraft designs were so big that the city grew really fast. Even before the war began, a large mining industry has started its work here, continued to develop, and after its completion. Over time, Norilsk got some towns satellites, one of which was Alykel. Norilsk importance for the economy of the USSR was difficult to overstate. Local industrial complex gave lion’s share of Soviet nickel, cobalt and copper, not talking about the precious metals. The loss of the city and especially the opportunity to produce what nature has hidden under it, as a result of the conflict with the opposing camp would have become a tragedy. Most likely, in this regard, in 1960 it was decided to deploy the local airport Alykel and to build a military town for pilots. On stilts in the middle of permafrost grew several dozen of buildings: barracks, administrative and office buildings, residential high-rise buildings for the officers. After the Soviet Union collapsed, the squadron was disbanded, planes with crews flew away to warmer climes, and Alykel became unnecessary. The population left Norilsk. The village also was the main attraction, which welcomes visitors, who come to the Russian nickel capital. Translated from the local languages â€‹â€‹exotic name “Halmer-U” means “river in the valley of the dead people.” This river is really there in 60 kilometers from Vorkuta. Superstitious people certainly believe that the settlement with the ominous name could not have had another fortune, but it was repeated by other cities.

Unlike Norilsk and Iultin, the appearance of Halmer-U was not directly caused by industrialization. During the Great Patriotic War in a condition of loss of Donbass coal the Soviet Union faced the question of its replacement to supply energy and industry of the country. Vorkuta and its surroundings was this alternate base for its European part. One of the new fields was discovered in 1942 on the banks of the river Halmer-U. However, mine started its work only in 1957. The village is near, like most miners’ settlements, directly depended on its well-being. When in the early 1990 s, forming enterprisers were closed Halmer-U was doomed. By the mid-1990s, its residents were forcibly evicted from their apartments. In fact, its subsequent fate was much more unusual. Halmer-Yu turned into a testing ground for weapons. In 2005, Vladimir Putin personally launched rockets into a local House of Culture from the Tu-160. Military completed things for which nature hadnâ€™t got time. Now the town is more like Stalingrad in miniature. Bechevinka, Finval, Petropavlovsk-54, a Soviet military town on the shore of the Bechevinskoy bay. Its existence is kept in secret, there are no roads, access is possible only by helicopter or ship. 6 thoughts on “In The Valleys of Death: The Top 5 Russian Ghost Towns”