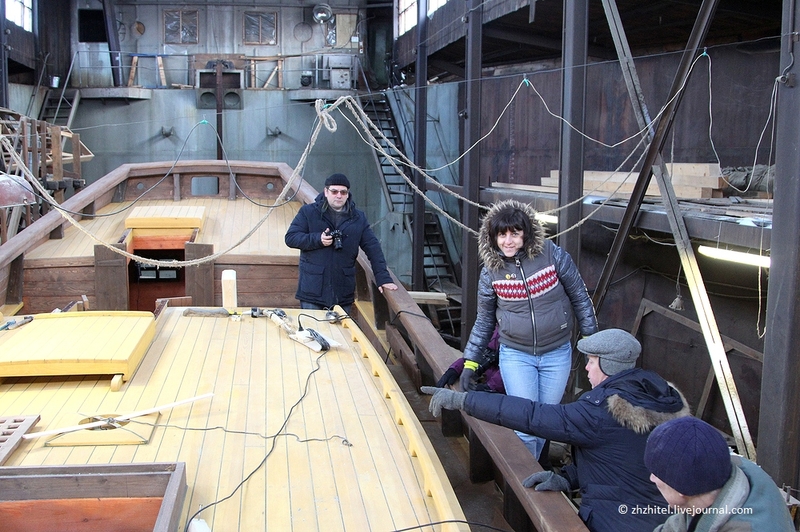 One of the most interesting places in Petrozavodsk is club “Polar Odyssey”. A team of true romanticists who are in love with the sea, work here. The club has its own operating fleet, a big part of which are wooden ships, copies of historical sailboats that sailed centuries ago. It would be very interesting to learn how to build wooden ships and how to sail in them.

“Polar Odyssey” is located in Petrozavodsk, on the shore of Onegskoe Lake. People who are interested in history, or people who want to take pictures, come here. Even if you can’t decide what a shallop is, or what type a boat is, or tell a propeller screw from a propeller, everything there is still very romantic. The club has a museum, which has collected nearly forty years of club history. The concentration of exhibits and artifacts per square metre is unbelievable, when the captain Alexey Dmitriev talks about the history, you can listen to it for hours. Wooden ships have been built at the club “Polar Odyssey” for decades, and on which they sail not only through the Onegskoe sea and Karelia surroundings, but the make long international expeditions. For example, in 1990, the shallop “Love” made a voyage of many months sailing to Israel. Maps of expeditions say a lot, they are to Greece and Italy, and England. All this is accompanied with numerous fascinating stories that should be in the pages of a novel. You can touch and even try on each exhibit. Here is a diving helmet that weighs about 20 kilograms, but no one turned down the opportunity to take photographs. The former participants of the expeditions became museum exhibits. This is “Pomor”, launched in 1987. Ships such as Pomors conquered the seas many centuries ago. From the site of “Polar Odyssey”:

Currently, the ship “anchored” at the Maritime Museum “Polar Odyssey” as an interesting exhibit. Unfortunately, there is no money for its proper conservation near the museum (working solely on donations from sponsors and self-financing). A few years later Koch will eventually rot, as a reproach to officials, broadcasting from different stands about the tourism development, patriotic education of youth, and other beautiful things …

The same shallop “Love”, a copy of ancient ship that sailed through many seas and returned to Petrozavodsk. Poor lady, she has a hard time in the winter. Alex talks in great detail about the features of each vessel. He knows every nail driven into the trim of the ship. There are also more modern ships, such as these Houseboats – cottages on the water, specially built for tourists. And these ships are written off, and were given to the club. But let’s look at the factory, where the new conquerors of the seas are now being built. This shallop will go on a world tour. In the spring, this shallop will be launched, then there will be its fit out and testing. Now it stands in a large shop. Inside, there are cabins and a kitchen. Of course, modern tools and instruments are used during the construction. In a neighboring shop, they build up a Drakkar copy – a so called Viking boat. So it will roughly look like Drakkar after construction. This vessel will also have a fascinating adventure, but construction is delayed because it requires funds.

It is a very interesting place, and may become one of the most popular tourist sites of Petrozavodsk, if it was supported by the state, but so far everything is made by the enthusiasm of club members.

If you’re in Karelia, plan to visit the “Polar Odyssey”, you will not regret it.

P.S. Wooden ships are not only built in Karelia. In Tomsk, Alexander Boitsov builds a copy of the boat of Peter the Great. He is also a very passionate man, read the story of how he came to the idea of ​​building a boat. Alexander now needs a little help, look, and maybe you can help him.