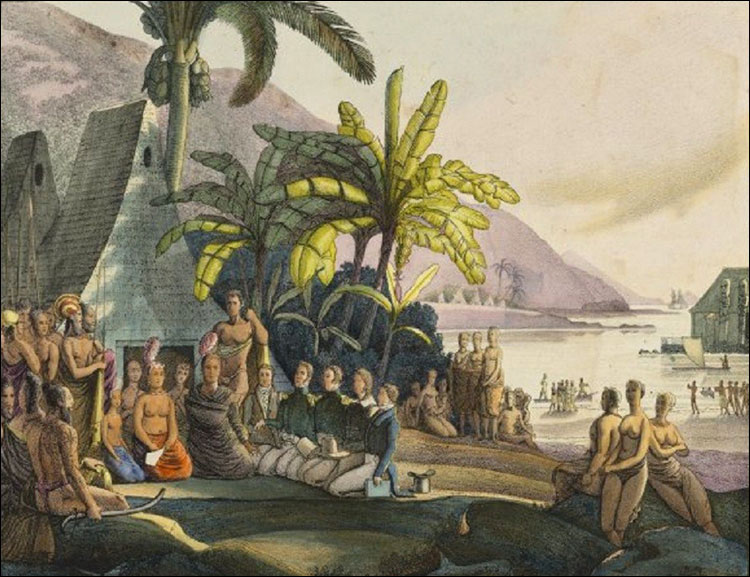 At one time, there were Russian colonies in America, and in Africa, and in the present territory of Germany. In Somalia, there was a New Moscow, and in California there was river Don. However, big politics interfered with the initiatives of the Russian colonists.
In 1815, the Russian-American Company (RAC), that was “in charge of” Alaska and Kamchatka, reached an agreement with the leader of the Hawaiian island of Kauai. Under the contract, he, together with the population, acted under the protection of Russia. Georg Anton Scheffer, a colonist in the Russian service, headed the development of a new Hawaiian colony. In 1816-1817, three forts were built by local residents, named in honor of Alexander I, his wife Empress Elisabeth and Barclay de Tolly (today there are only remnants of the Elizabeth fortress foundation left).

The Hanapepe River was renamed as the Don. Local leaders took Russian surnames (Platov and Vorontsov). Unfortunately, the central government didn’t appreciate the importance of the new acquisition. The following verdict came from St. Petersburg: “The Emperor deigns to believe that the acquisition of this islands and their voluntary entry in his favor, not only can’t bring Russia any significant benefits, but, on the contrary, in many respects, it is associated with a very significant inconvenience.” So, set up in record time, the Russian colony was virtually abandoned and left to their fate. In contrast to Tsar Alexander I, Americans appreciated the importance of the islands, and started to colonise them. In the village of Waimea, American sailors tried to lower the Russian flag, but the flag was defended by Hawaiian warriors. In June 1817, after an armed clash in which three Russian and several Hawaiians were killed, Russian colonists were forced to leave and return from Hawaii to Alaska. 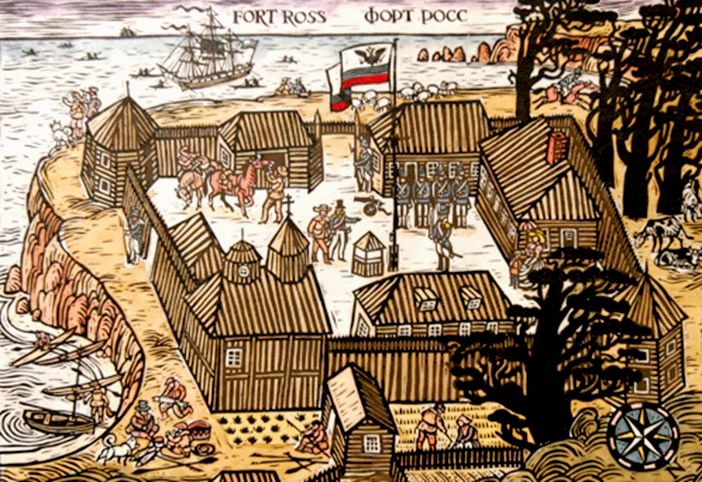 The Russian colony in Alaska – in a harsh climate – suffered from food shortages. To improve the situation, an expedition to California was organized in 1808-1812 to find fertile land to settle. Finally, in the spring of 1812, a suitable location has been found. Towards the end of 1812, 25 Russian colonists and 90 Aleuts founded the fortified settlement named Ross. At this time California was owned by the Spanish, but they had colonised only a little territory. So, San Francisco, was located 80 kilometers to the south of the Russian colony, and was only a small Catholic mission. The real owners of the territory in which the Russians settled, were the Red Indians. The Russians bought their lands for three pairs of pants, two axes, three hoes, and some beads. Fort Ross was the southernmost Russian settlement in North America.Russian names began to appear in the surrounding area: Slavyanka River (modern day Russian River), Rumyantsev Bay (modern Bodega Bay.). Over the lifetime of the fortress it was never attacked: there were no Spanish, and in 1821 the Mexicans were not very close, and they remained more or less at peace with the Indians. For the duration of its existence, the colony was unprofitable for the Russian-American Company, and in 1841 it was sold to a Mexican citizen of Swiss origin, John Sutter. 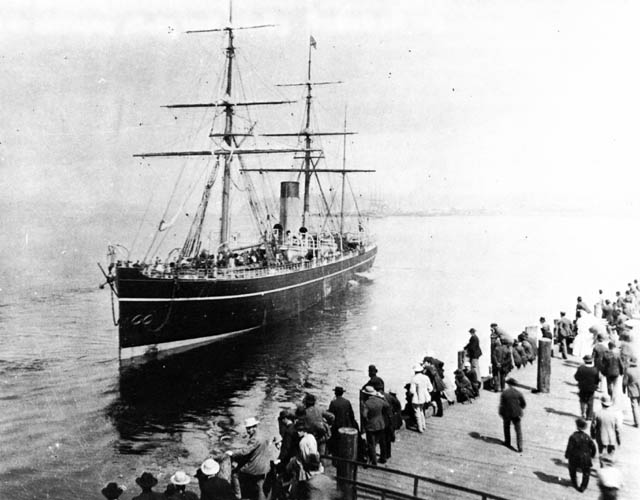 On December 10 1888, a ship sailed from Odessa with 150 Terek Cossacks – volunteers – on board. The squad was headed by adventurer Nikolai Ashinov. The aim of the expedition was to support a spiritual mission in Christian Abyssinia (Ethiopia). In 1883 Ashinov had already visited Abyssinia: posing as a representative of the Russian Emperor, he was negotiating with the Ethiopian Negus (Emperor) about the political and ecclesiastical rapprochement between the two countries. On January 6, 1889, Ashinov’s squad landed on the shores of French Somali (modern day Djibouti). The French believed that the aim of the Russian expedition was Abyssinia, and didn’t interfere with the Russian squad, but to their surprise, Ashinov founded a fort in the vicinity of the abandoned Egyptian Sagallo and began to settle there. 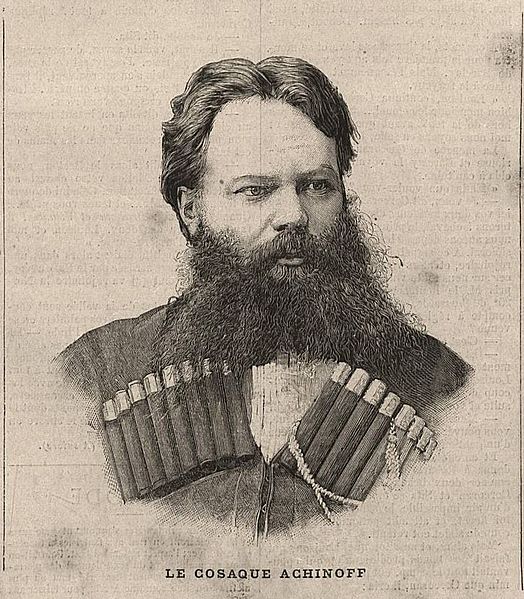 The fort was renamed to New Moscow or the Moscow village, and a block of land around fifty versts along the shore and hundreds of miles deep was declared to be Russian. A French officer soon arrived at the fortress, demanding the Russians leave the Sagallo as soon as possible. Ashinov refused. France was then in alliance with Russia, and the local authorities hadn’t decided to take separate action to expel the Russians from their territory, as they were representatives of friendly powers. Correspondence between Paris and St. Petersburg started. Emperor Alexander responded to Ashinov’s gamble rather sharply: “Certainly it is necessary to remove this asshole Ashinov from there … he just discredits us, and we will be ashamed of his activities.” Ashinov’s adventure could hinder the process of successfully developing Russian-French rapprochement. The French Government was informed that Russia would not mind if France took steps to expel the Russian detachment from its territory. Having received carte blanche from the Russian government, the French sent a squadron of three cruisers and gunboats to Sagallo. After Ashinov, obviously not realizing the seriousness of the situation, once again refused to comply with the demands of the French, they started shelling the fortress. Several Russians were killed and wounded. Finally Ashinov’s shirt was raised above Sagallo as a white flag. The settlers were taken to the Russian warship “Zabiaka” which transferred them home. 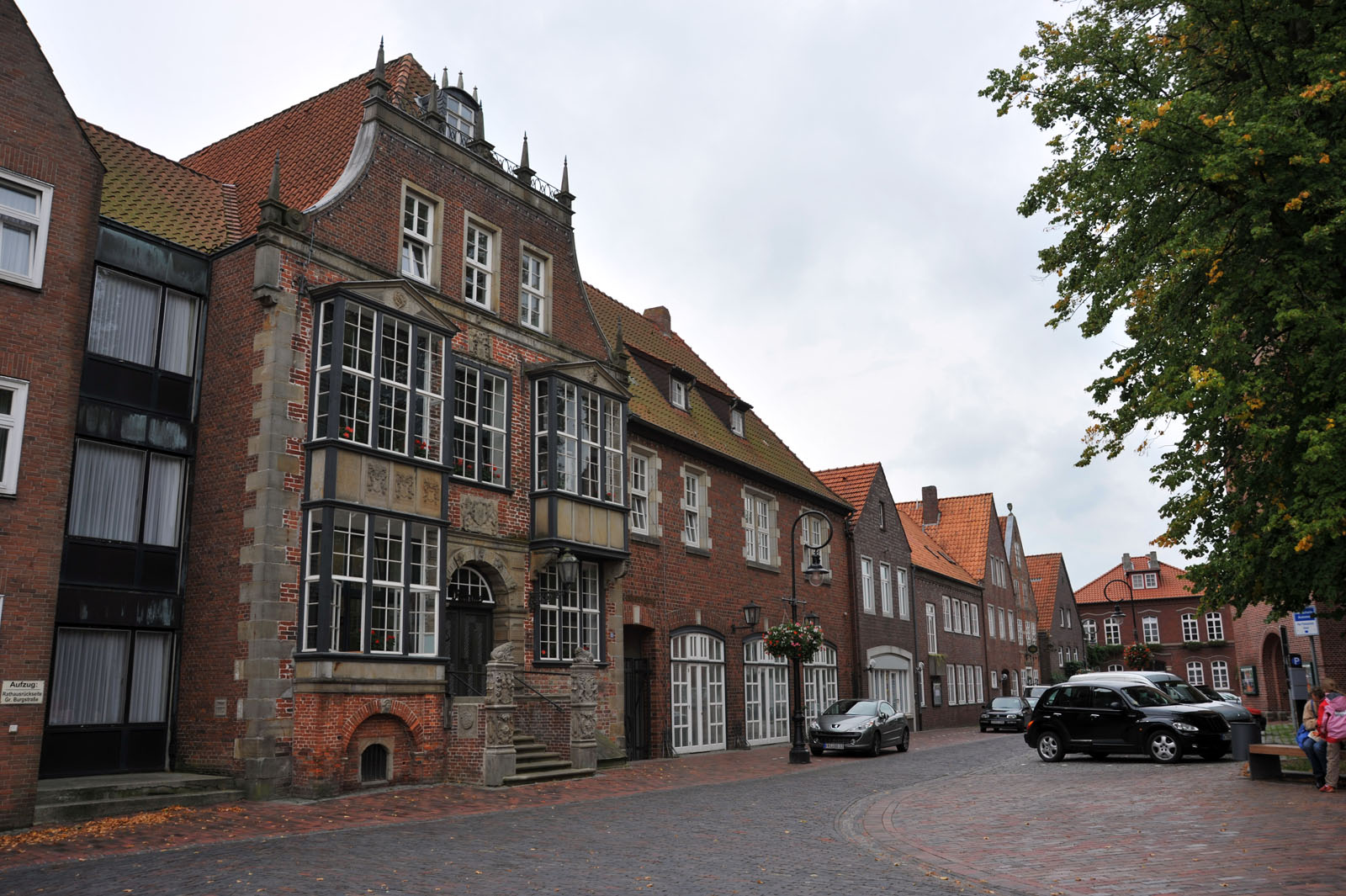 On the shore of the North Sea there is a small German town of Jever, in which a tart beer, Jever Pilsener, is brewed. This beer could have had the inscription “Made in Russia” – the fact is that at one time this city belonged to the Russian Empire. In the XVII century, the town was in the possession of the Anhalt-Zerbst prince. Sofia August Frederica, better known to us as the Russian Empress Catherine II, belongs to the same family. So when in 1793 the last prince of Anhalt-Zerbst died, Jever was inherited by his only sister, Queen Catherine. The city became a part of the Russian Empire. The city was Russian until 1807, when Napoleon occupied it. In 1813, French troops were expelled from the city, and it once again became Russian, but not for long: in 1818 Alexander I conceded it to his relatives – the neighboring Dukes of Oldenburg.

4 thoughts on “The Most Exotic Lands of the Russian Empire”