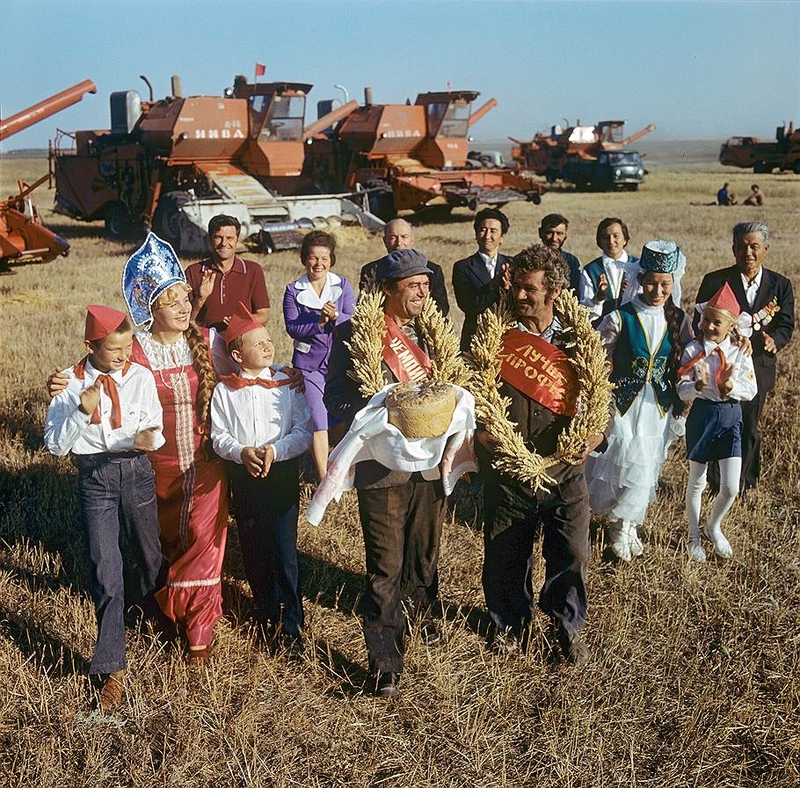 Reforms and people in the USSR

August 16, 1956, in the USSR there was adopted a resolution “About irrigation and the development of virgin soil lands”. More than a half million people went to the steppes of Kazakhstan, the Volga region, Siberia and the Urals.

“In such way, foremost people of reaping are honored on virgin farm” Leninskiy ” ” / Photo: Iosiph Budnevich

The development of virgin land on color photographs from the archives of the “Ogonyok” magazine – in the photo gallery of the famous newspaper.

The development of virgin land began in 1954 when in the Soviet Union there was a grain deficit. 50 thousand. Of Komsomol members from the central part of the country went to the Aktyubinsk region (Kazakh ASSR), plant grain culture. “Through virgin soil” / Photo: A. Gostev Workforce for new lands was attracted from the western part of the USSR. Mobilized young Komsomol members got free transport, allowance for a thousand rubles. In addition, they had a soft loan amounting to 20 thousand for 10 years for housing building. During five years from the state budget, 20 billion rubles were allocated for this purpose. “Friends of a tractor driver Kiparenko Maria (on the left) and Sofia Borsch came to develop virgin lands in the Northern Kazakhstan” / Photo: N. Drachinsky In total in 1954-1959 years in the campaign for the development of new agricultural land were involved 1.7 million people. “Student of MHTS in the name of Bauman works on virgin combiner” / Photo: Simon Friedland

“In 1956, there was a great year. Harvest in the desert was grown very rich, instead of the promised 600 million there was 1 billion tons of grain “, – wrote in his book” Virgin land”Leonid Brezhnev. In 1956 in the USSR there was collected a record harvest of 125 million tons of grains, half of which was obtained in the virgin lands. “People have to reckon with the natural processes and adapt to them, contrasting their fabrication to wild nature. But whatever happened, and despite all the difficulties, the virgin bread remained the cheapest one “, – Nikita Khrushchev wrote in his memoirs. In virgin areas, there was organized a usual for youth leisure: clubs, cinemas, and libraries. “For the second year in a row, the primacy among the mechanization is held by the farm” Lenin Zholy ” in Kokchetav region by communist Marat Mutagarova. Along with him there are three siblings – the Communists Rafhat, Rashid and Farid”/ Photo: Iosiph Budnevich

To get quick results and high harvest, virgin lands were fertilized with chemicals. Their consumption, and accordingly, production in the country has doubled. Staff ignored the particular climate of the steppe zone – active use of fertilizers has led to frequent dusty storms, erosion, and loss of soil fertility. The sharp outflow of the work force from the central part of the Soviet Union had a negative impact on the performance of agricultural production in these regions. In 1974, the authorities announced a “second virgin soil” – this time in nonblack earth European part of Russia. Plowing of giant lands in Kazakhstan has led to a reduction of pasture and hay fields. This reflected in the traditional sectors of agriculture in the region – animal husbandry, which was in the early 1960s in a crisis. “A worker of the elevator Ayman Seytkasimova” / Photo: Oleg Knorring “Mayra Khasenova spent twenty-third harvest time in the combine. Before going into the field. Mayra Khasenova, husband Saylubek and son Moscow (the son is named after the capital) “/ Photo: Joseph Budnevich “The water of Irtysh channel – Karaganda is successfully used in the farm fields of Pavlodar and Karaganda regions” / Photo: Joseph Budnevich Virgin soil saga captured the Soviet Union so hard, that in 1961 the Akmolinsk town in Kazakhstan was renamed into Tselinograd (now it is the capital of the republic – Astana), in 1963 Ust-Uyskiy district in Kurgan region was renamed in Tselinniy. “Until recently, the tractor driver Leonid Panov was a miner, and now picks up virgin lands in the Altai, in the Kulunda steppe ” / Photo: Alexander Gostev

About 4 thousand virgin soil workers were awarded orders and medals, five of them were awarded the title of Hero of Socialist Labor. “Virgin land habitable. It is rainy outside”/ Photo: Isaac Tunkel Considering all the successes of the pioneers of the virgin soils program first people didn’t want to still live on cultivated lands. From 1965 to 2000, 280 thousand people left only from 10 of the virgin areas of the Orenburg region. This is four times more than the number of arrived in the region for the agricultural work.