I was also driving this car in the Army. In fact it is “ascetic”, but really useful for the military. Unfortunately I havenâ€™t got a chance to drive off roads, so I havenâ€™t seen its basic functions. Probably another one legendary cars for the citizen was “LUNOKHOD”. Let’s read together the history of the GAZ-66.

November 2, 1963, at the Gorky Automobile Plant a pilot batch of truck all-terrain vehicles GAZ-66. The history of “sixty-six” confirms the well-known idea that big fortunes are always side by side with big failures.

That’s how it was:

At that time Gorky Automobile Plant has successfully completed the state tests of GAZ-62 -airborne wheel drive all-terrain vehicle with carrying capacity of 1.1 tons, is designed to carry 12 people and tow a trailer weighing 1 ton. It seemed that the fate of “sixty-second” was resolved. It even got into a well-known book “Domestic automobiles” of V.I.Anohin, for chiefs fleets.

However, the plant was able to release a total of 69 all-terrain vehicles GAZ-62. The main customer – the Ministry of Defence – abandoned this car. Changes were associated with the change of the Commander of the Army. In 1960 Vasily Chuikov was appointed to this post, Marshal with rich combat experience. However, GAZ-62 repeated the same fate as other equipment received by the army. These years were generous with all sorts of changes in our country’s history. It is enough to say that in 1959, the legendary commander of the Airborne Forces V.F.Margelov was removed from this post, and in 1961 – re-appointed. The logic of war, as we know, is different from the logic of the civilians – it takes into account factors that are hidden from the uninitiated people. Airborne Forces preferred a bigger truck because at the time there were new means of delivery – roomy military transport aircraft and helicopters, lifting airborne platforms.

Gorky Automobile Plant was planning a broad family of the truck with a cab over the engine. Among other was developed all-wheel drive truck GAZ-68 with a V8 engine for the national economy (the leading designer Rostislav Grigorievich Zavorotny). After the fiasco of the GAZ-62 attention was concentrated on it. The car was given the index of 66, that was used before on an experimental four-wheel drive truck with bonnet composition. GAZ-66 looks like a slightly enlarged GAZ-62, with which it was created at the same time. 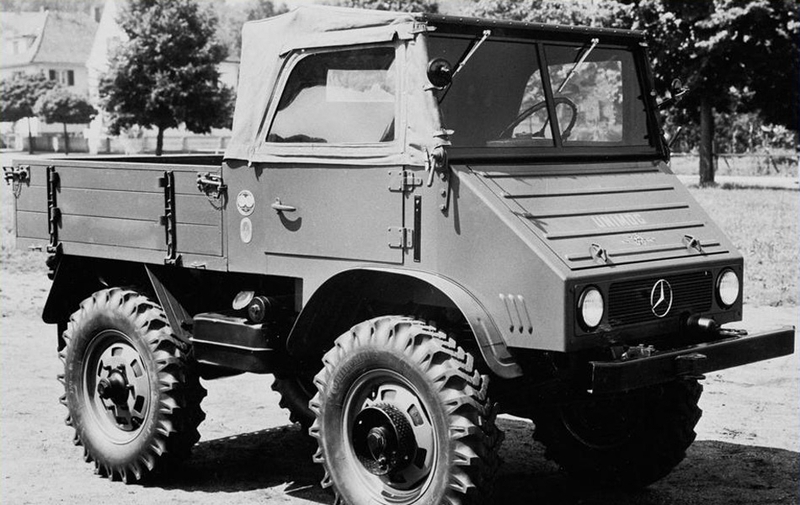 Mercedes-Benz Unimog of 1948 sample. Later, it twice increased in size, forcing designers of other countries to dream of the same capacity and permeability of their cars.

There was a lot in common in machine design – hypoid main gear with limited slip differential, steering pair – three crest roller, three-way four-speed transmission with synchronizer on the third and fourth gears. When the military ordered air transportable modification of GAZ-66, the cockpit from the GAZ-62 with a folding fabric top was established on it.

The all-metal cab that was gotten in 1958-1959, prototypes of GAZ-66, different panoramic windows with curved side windshield sections. In preparation for production of the cockpit, its shape has changed a bit. This, however, does not change the main thing. The regular cab is welded from large forged parts, which give it rigidity. But the cab of GAZ-66 was created in such a way that instead of an all-metal top a light top could be installed. And then the usual approaches were not good.

GAZ-66 cockpit frame was welded with rods of the box and angular profile and from stoned stamped sheet metal panels 0.5-3 mm thick. All scientist of the country cursed such a structure, because when any noticeable damage (which is not uncommon in the parks), its repair turned to be a real headache.

Again, the logic of the main customer prevailed. For transferring of the vehicle through the air a lot of things were sacrificed. Nobody thought about how to get out of the cab after the car will drive into the belly of the aircraft. To get a great compactness they sacrificed ease of operation – to the gear lever, the connection of the front axle and a shift stage you had to drag back. But the design was calculated to withstand overload up to 9g and landing speed of 10 m / s during the parachuting on a special platform. Such platform was developed by design bureau of the plant â„– 468 “Universal” under the leadership of A.I.Privalov. Subcontractors didnâ€™t like Gorky’s cabin. They, in particular, did not agree that in the folded state the windshield, canopy, and part of the door could cling to the parachute and damage strands. As a result, the construction of the airborne version was passed to the Pilot Plant â„– 38 MO in Bronnitsy city, and the release of serial GAZ-66B was assigned to one of the Ministry of Defence repair factories. However, with the adoption of new types of aircraft, such as IL-76, the need in strict observance of dimensions disappeared. Costly production of low silhouette GAZ-66B will be completed, and normal cab trucks will be passed to the Airborne Troops. As a result of engineering experiments in July 1964 first serial 66th came from the GAZ factory, endowed with a 2-ton lifting capacity and a balanced center of gravity.

At the same base as the GAZ-63, “sixty-sixth ” became 226 mm shorter. Although its body was much longer – 3330 vs. 2940 mm. The body was a versatile all-metal cargo platform. Its lattice board reclined, becoming benches for 18 men.

Comparing with “sixty-six” GAZ-63 represented a major step forward. Instead of composite beam bridge used a one-piece “banjo” construction was used, not cast as on the GAZ-63, but extruded and therefore lighter. They managed to achieve half the weight distribution along the axes, which is unusual for a car with a “cab over engine” composition. Since the two bridges of GAS-66 were loaded approximately equally in the front and rear suspension spring devices of the same construction were used.

In this way, Germans increased the permeability of their ATVs. Technique attracted by the fact that it doesnâ€™t require the driver participation, and, moreover, it is compact and has got high strength. Having studied the trophy technique, and later â€“ after a series of joint ventures with German engineers of scientific researchers, Soviet designers have significantly improved cam differential. In particular, they got rid of such disadvantage, as the inequality of block coefficients during the delay of one and the other axis. For this purpose, in the differential of the GAS construction (acting as satellites) placed in two rows. By the way, through this node, GAZ-66 was unified with wheeled armored vehicles manufactured by the Gorky Automobile Plant. The first batch of trucks GAZ-66 was released as a gift to XIII Congress of Soviet Trade Unions. Real production started on July 1, 1964. “Sixty-six” had to displace GAZ-63. It happened gradually. During this time, the all-terrain vehicle got rid of many “childhood diseases”. In 1968 all, without exception, “sixty-six” were finally equipped with a centralized pressure in the tires control system (from 2.8 to 0.5 kg / cm2). Until that time, such a system was only on vehicles with a winch – GAZ-66A and GAZ-66AE. At a basic of GAZ-66-01 chassis and its modification was installed over hundreds of weapons and military equipment, including such exotic as a 12-trunk rocket system of volley fire BM-21B. One of the most well-known versions was a machine-trailer K-66, called Kung.

In 1970, the first GAZ-66 got the State Quality Mark introduced in the 1967 year – the letter “K” inscribed in a pentagon. It was turned in such a way that resembled the silhouette of a worker, who proudly ascended word USSR over the head. People called this symbol with irony, “I did as I could.” Even under the strict eye of the military quality was not really good. So, in a report about the testing of GAZ-66 on the site NIII MO-21 was recorded anecdotal “rust under the Mark of Excellence”! 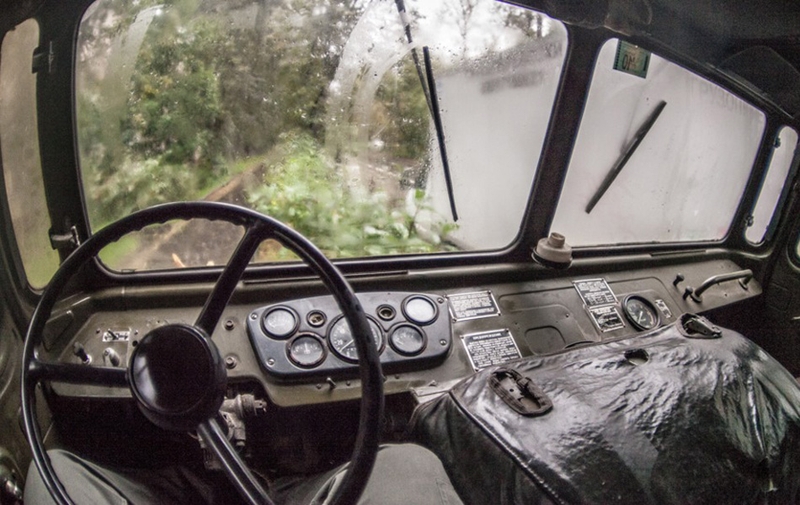 Cabin in general and in the driver’s seat has a number of complaints in matters of free space and ease of use of the car. For example, curved gearbox lever is located on the right rear of the driver, which causes some inconvenience when changing gears. Until the 90s GAZ-66 was used extensively and was a part of regular combat units, including in Afghanistan. Because of the dangerous position of the driver and passengers above the engine in the case of undermining, the truck was gradually taken out from use. During the use of GAZ-66 was observed uncharacteristic pleasant smoothness. Without going into technical details, we can say we had to pay for it by the fact that it couldnâ€™t be overloaded.

GAZ-66 production ended in 1999. Recent modifications together with the military order it lost a universal body and replaced it with the onboard platform with a flat deck. The necessity to ensure visibility in the “blind spots” made designer Leo Eremeev complement windscreen of GAZ-66 prototype with curved side sections. 1958. In a series they will be replaced with more practical flat windows. Experienced all-wheel drive truck, that originally received index GAZ-66, 1956. In this car developers tried to eradicate the main disadvantage of GAZ-63 – a small lateral stability due to too narrow gauge. The prototype of airborne GAZ-66 with cabin from GAZ-62 and the bridges with the air pressure in tiers control system (bridges unified from BRDM-2), 1959. One of the two experimental tracked all-terrain vehicle – “conversions” GAZ-66 with propeller of S.S. Negdanovskiy during tests in February and March 1961, based in Berezniki, in the northern Urals. The composition of the GAZ-66 (there is a 66A with modification of the winch). Frame-panel cab GAZ-66 was originally designed as an open one. Pre-production sample of the GAZ-66B for the Airborne Troops, 1966. Adopted by the Soviet Army Order â„– 38 dated March 2, 1966. Cab is already modified – “upper lip” above the radiator grille is straightened. Exhibition sample GAZ-66-01. Additional code “sixty-six” was produced in 1968 after many design flaws were corrected. Since that time, without exception, GAZ-66 started being equipped with centralized air control system in tires. Then the car was given a “Quality Mark”. Articulated truck as part of GAZ-66 and active semi-trailer 1-PP-4 with carrying capacity of 4 tons being tested by Karakum, 1961. Similar “coupling” was created, for example, for the transportation of rocket shots. Trailer was not taken into production. Lightweight BM-12B “Grad-V” was created for the Airborne tasks. Adopted on September 20, 1967. Technique fires with projectiles of 122 mm caliber at a distance of 20 km. Fire-fighting car of communications and lighting ACO-5 (66) -90 was made on Vargashinskiy plant of fire-fighting equipment on the chassis of GAZ-66-01 in 1967. They could know about the forthcoming of GAZ-66 by the characteristic hum of the low-pressure tires. Experimental floating four-axes GAZ-44 crosses water obstacles with GAZ-66 in the body. The GAZ-66 with open window in the windshield. 1972. GAZ-66-03 Modification equipped with electrical noise immunity technique, without centralized pressure in the tires control system, the years of production 1964-1968.

GAZ-66-05 truck equipped with a winch and electrical noise immunity equipment, the years of production 1964-1984.

GAZ-66-21 truck with a long wooden platform with a reinforced frame, axles and suspension, produced since 1993

GAZ-66-41 car with a diesel engine GAZ 544, with gabled tires. On the truck, there is no system of centralized tire pressure control and an additional fuel tank, produced in 1993 -1999.

GAZ-66-81 export version of the vehicle in countries with a temperate climate.

GAZ-66-91 export version of the vehicle in countries with tropical climates.