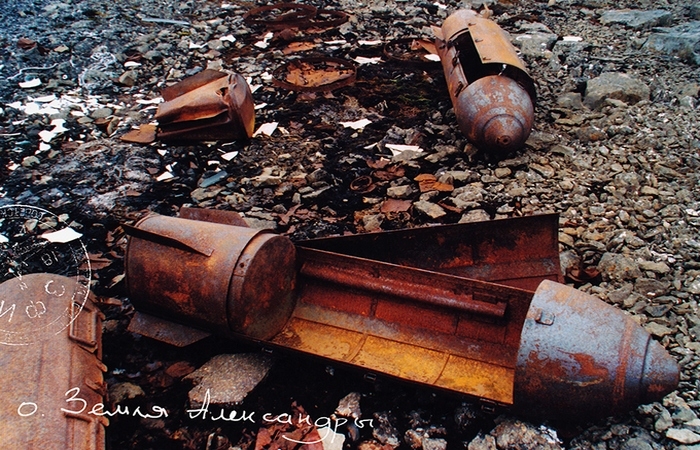 Remember, we talked about one of the most mysterious companies of Nazi Germany, and most recently the whole world was thundered with sensation: Russian Arctic researchers found a secret Nazi base, abandoned by them during the Second World War.

On the Earth of Alexandra Island of Franz Josef Land archipelago, preserved ruins of bunkers, documents, and other artifacts.

During the research of this godforsaken island, which is within the territorial borders of Russia, scientists have found more than 500 items, including bunker ruins, items of personal use, thrown out gasoline cans and even paper documents that were surprisingly well preserved in cold climates. It is believed that in 1942 there was built a meteorological station. The base was working not for a long time – only two years, they made over 700 synoptic weather reports. In July 1944, it was abandoned after the entire staff was ill, and half of the people died.

There were shortages of supplies and people ate the half-baked meat of polar bear, infected with roundworms, and they were eventually infected with trichinosis.

Survivors were picked up from the base by a German submarine. Now, 72 years later, the remains of the secret base were re-opened and now you can see on video forgotten artifacts of wartime. Right under the feet, ammunition half-frozen into the ice, fragments of tents and personal items, such as shoes. On most items, there is a release date, and they are marked with the swastika.

The mysterious place was also known as Schatzgraber or “Kladoiskatelâ€. Eugeniy Yermolov, a senior research associate at the National Park “Russian Arctic”, said: “Before this information about this base was known only from written sources, and many considered it as a fiction. However, now we have real evidence. ” A spokesman of the National Park Julia Petrova added that “we managed to collect about 500 items of historical importance on the territory of the former German base” Kladoiskatel “which was on Alexandra Land island, which is part of the Franz Josef Land archipelago, from September 1943 until July 1944. All found objects will be moved to the mainland of Russia, to Arkhangelsk, where they can be stored, studied and eventually put on public display in a museum.