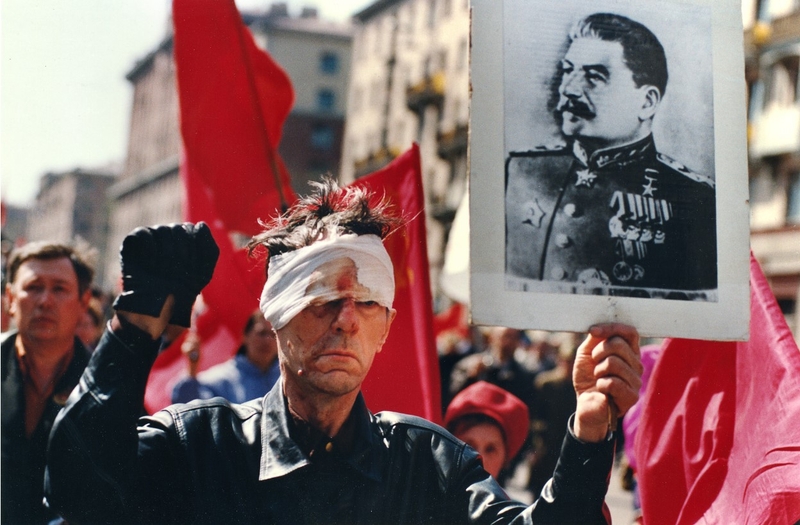 1993 Bloody May Day. Last demonstrator of communists demonstration goes away after a clash with police 1993 Covrov. Strict regime camp 150 miles east from Moscow. The prisoners laugh, how a thief shows his tattoos to photographer 1993 Crowds of people gather on Red Square for a demonstration in support of President Yeltsin, after the parliament impeached him 1993 Onlookers watch at the assault of the White House 1993 Mother weeps at the funeral of her son, officer of SWAT, who was killed during the assault of parliament 1996 Behind the scenes of the Moscow night club 1996 After the fall of communism, Moscow has become known for its clubs for homosexual people. The picture was taken in a popular homosexual club “Shans” 1996 “The boundaries of democracy.” The chain of policemen holding back those who could not get to a rock concert in support of Yeltsin, that was held on the Red Square 1996 “Democratizers in action”. Police use force during a rock concert in support of Yeltsin 1996 On a rock concert in support of Yeltsin, held on Red Square 1996 “Love on the background of the Civil War”. Young couple embracing on Red Square after participating in an action in support of Yeltsin 1996 «Pax vobis». Boris Yeltsin in Kazan during his election tour 1996 Krasnoyarsk. Supporters of communist leader Gennady Zyuganov, listen to what he tells them at a campaign meeting in this Siberian city 1996 Novosibirsk. Old and new architecture in the reflection of the window glass 1996 Ulan-Ude. Visiting the ” Chupa chups ” (young people call the statue of Lenin on the central city square in the capital of Buryatia so)