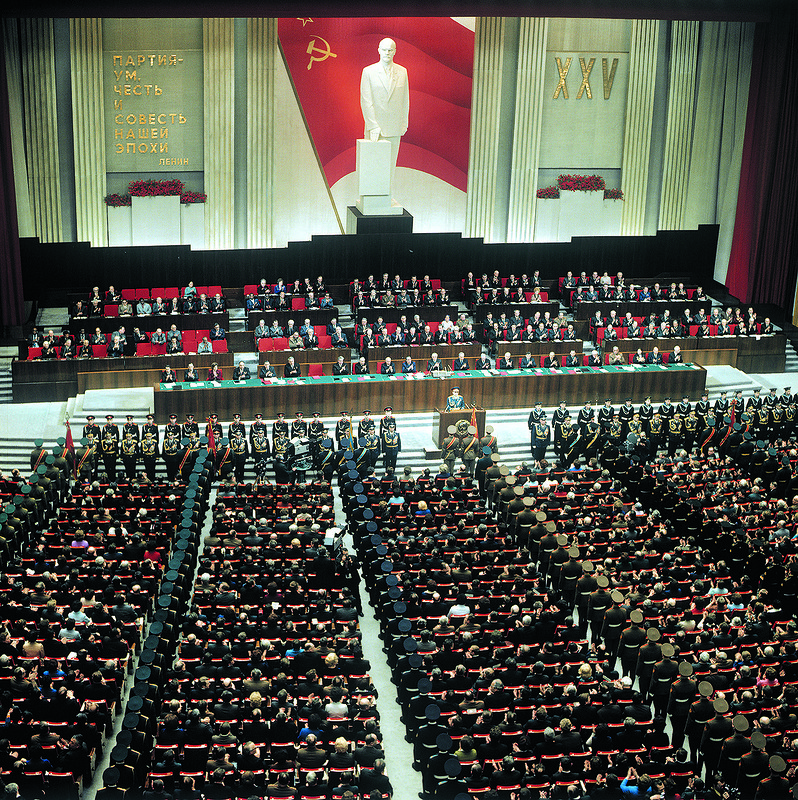 As our readers know, in our project, the 20th century in color every year usually consists of two parts: the USSR / Russia and the rest of the world.

The delegation of the Armed Forces of the USSR greets the XXV Congress of the CPSU (February 24 – March 5, 1976). Kremlin Palace of Congresses. Yuri Abramochkin / RIA Novosti:

There was a Stagnation, but Soviet science, industry and trade every day reported about the new successes and achievements.

In 1976, in Naberezhnye Chelny automaker plant “KamAZ” was launched: The first car of KamAZ has driven from the main assembly line on February 16, 1976. Riga has begun producing a new “Rafik” the RAF 2203, which will be on the line right up to 1997. Advertising poster of 1976 with the first example: And this is the millionth ZIL on the factory, which Russian capitalism then will just wipe off the map. 1976: In 1976, the first computer appeared in Lipetsk. It was installed in the computing center of provincial department. The third generation of Soviet computers: In 1976, in the same Lipetsk there was the opening of the first fish shop “Ocean”, a photo from the magazine “Soviet trade”: There were no “Empty shelves” in the country!

Yes, something you needed to “get” somewhere or stand in queue, but the banquet tables of Soviet citizens in those years, were full with all sorts of snacks and “batteries” of alcohol.

What to bring from the Caucasus. Photo of Finnish tourists made in Georgia, 1976: In recent decades, the USSR brought a scattering of cult Soviet film every year and 1976-th is not an exception.

On January 1, 1976, there will be the premiere of the film “Irony of Fate, or Enjoy Your Bath!”, which will become one of the symbols of the era: Some pictures from a film give a sketch of the Soviet life: Talking about the memorable films  we have “12 chairs” with Andrei Mironov and Lyubov Polishchuk: And the major hit was the family musical film “Mother” with Gurchenko and Boyarskiy: 1-2 January 1976, the premiere of the film “The Adventures of Buratino ” that forever entered the life of Soviet children: But among the Soviet premiers of 76-th there were such films to which children were not allowed, and parents tried to get away them from the TV screen.

Svetlana Toma in a scene of Rada Lotyanu swimming ” Gypsies Are Found Near Heaven ” 1976: Musical life in the country is also rich. “Pesnyary” band released hit album “Vologda”, the title track of which became the unofficial anthem of the city with the same name: However, the song of the year of 1976 was the memorable “Belarus” from the same “Pesnyary”: It also became the unofficial anthem of Belarus:

Song of the Partisans, pine trees and fog.

Song of the Partisans, scarlet dawn,

Incredible, but I remember how parents listened to a record of this song in the countryside in 1976!

Style of Soviet citizens in 1976 on the image of Jacques Dyupake: The era of jeans is still far, and even women’s pants are a rarity. But the bright colors are in fashion for a long time.

A typical winter clothing from the 76th: Those who lived at the time, never forget these handsets and modest charm of Soviet eateries: 1976 in the Soviet Union can’t be imagined without the ubiquitous buses LIAZ-677, that evil tongues for some reason called “cattle carriers”: Comparing with them new Hungarian “Ikarus” seemed a miracle of modern design, although the design was created in the mid-1960s: For holidays there are always a lot of red scenery and portraits of members of the Politburo, but the clouds were not dispersed. May Day in St. Petersburg was really hot! May Day demonstration in Moscow in 1976: On the international arena, as we recall, the year was pretty calm – hosts of “International Panorama” spoke about the ” international detente “.
The Soviet Union was in the zenith of its power, the number of its friends and allies in the world continued to grow because of the countries of the “Third World” that have chosen the path of socialist orientation. CPSU General Secretary Leonid Brezhnev and Prime Minister of the Revolutionary Government of the Republic of Cuba, Fidel Castro. 01.07.1976: 1976 was one of the first years in the legendary Soviet hockey history – we took the gold at the Olympics! But who was the main hero of the Soviet 76th?

Shavarsh Karapetyan, who saved 20 people from the sunken trolleybus in Yerevan September 16, 1976: Surely, there was something else important in 1976 that I have forgotten but it is impossible to remember everything.