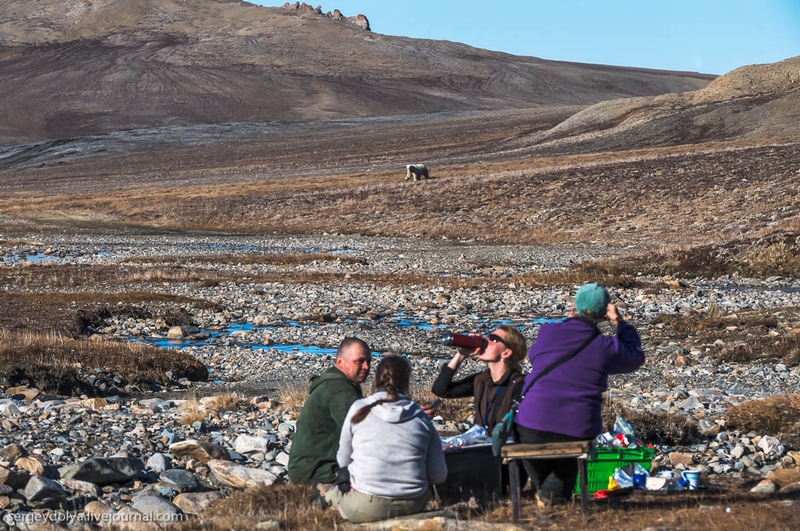 Russian bloger Sergey went to this island, and here is his story:

During 4 days on Wrangel Island, we have seen 169 polar bears. Sometimes they came very close to us, but no one was hurt. At the same time, neither we, nor our guides had any weapons, except a pepper spray and rockets that no one even used.

We followed the rules designed by the most authoritative and experienced Russian scientist studying polar bears – Nikita Ovsyanikov. Nikita has lived on Wrangel Island for several decades and has met lots of bears. He never carries weapons but has used a pepper spray 3 times.

I don’t know whether you’ll meet a polar bear one on one someday, but these simple rules can save your life when you meet any large predator. In order to understand how to behave, you have to know something about polar bears.

1. A polar bear is a predator. It is not a teddy bear from children’s store. It can kill, even though it looks fluffy.
2. Polar bears are very careful. To hunt, they need to be healthy. A wounded bear would not be able to feed itself, so bears go into battle only in extreme cases. In 99% of cases they prefer to run away if they see that you do not run first.
3. Polar bears are very curious. There is not enough food in the Arctic, and bears come to explore everything that is unusual. So if a polar bear comes to you, most likely it’s because of curiosity, and not in order to eat you.
4. Polar bears do not consider human beings to be food. They eat seals mainly, which are caught while they rest on the ice.
5. Polar bears are well aware of body language. They well understand if you’re afraid or not.
6. Polar bears have a herd reflex: If one bear runs, the others will run, too. Not even understanding why they run away. Just to be on the safe side. A contact with a polar bear can occur for three reasons:

1. You provoke it yourself. For example, deciding to feed a bear with condensed milk, as explorers loved to do. Or perhaps you go close to the bear to take a selfie.

This picture was taken at Cape Schmidt in Chukotka 2. You behave in an improper way. Never show the bear that you are a victim. That is, in any case do not run away or move away from the bear. It must be shooed away. Slow and clumsy seals lying on the ice are food for bears. Therefore, it is necessary to stand and move. Do not run but simply move, but more on that is below.

3. You suddenly sneaked up on a bear. If the bear sees you at the last minute when you are too close to it, it may be frightened, it may not have time to think (they are slowpokes) and it may attack you, just in case. Therefore, it is important for the bear to know in advance about your location, and understand what you are doing. Do not sneak up on a bear. If you exit the building, then do it loudly and immediately look around carefully. Bears like to use buildings as hideouts and they may sleep under the entrance. Tundra is just seems to be flat and open. Because of its relief, one may not notice a bear over the hill. In this photo there are five polar bears. Try to see them: A bear can be “read” on the snow from afar:

Here’s one bear. Can you find it?

It is near the river: So, what should you do if you see a polar bear, and you are not in the zoo but are in the Tundra?

1. Do not run! In no event, under no circumstances, no matter how scared you are. Do not run. As soon as you start to recede or run – that’s it. You become lunch for the bear. You have no more chances to survive.

2. Do not shout! A quiet approach is always better than a noisy one. Bears are curious and if you scream, they can come closer and ask: “Excuse me, I didn’t catch, what did you say?”. So keep quiet.

3. If you’re not alone, than try to cumulate together. Stand next to each other and be as high as possible. You can raise jackets or backpacks above the heads, or put a companion on your shoulders.

4. Do not reduce the distance between you and the bear. Behave as aggressive as possible. Do lunges toward the bear.

5. Use repellants in advance. The most effective repellant is a long stick like a spear, pepper spray, a rocket launcher or grenade sound. Do not sleep in tents in places where there are bears. If there is no other choice, someone must constantly keep watch outside. All sorts of security perimeters do not work. A bear will be interested in a tent, find you lying motionless there and eat you.

Never separate the mother from her cubs. According to statistics, in the first year only 25% of cubs survive. The rest die. So mothers protect their cubs as much as they can and nothing would stop them if they thought their cubs were in danger.

Prepare your repellants in advance and do not use them at the last minute. Let me remind you the main rules:

3. Do not scare them The photos that I have use here were taken during our overland trip around Wrangel Island. We stopped for a snack and the smell of the food immediately attracted a bear: It came from afar. It came up to us cautiously, in gradually narrowing circles. We didn’t pay any attention to him and did not show worry: All in all, he looked sadly at us, sniffed our cheese and sausage and was gone: I used to be afraid of bears. It seemed to me that if I see it on the horizon – that’s it, I’m dead. After a visit to Wrangel Island, I realized that bears are cowardly and very careful, and that you shouldn’t be terribly afraid of them. If you follow the rules described above, you’ll just take beautiful photos and will be safe and sound!