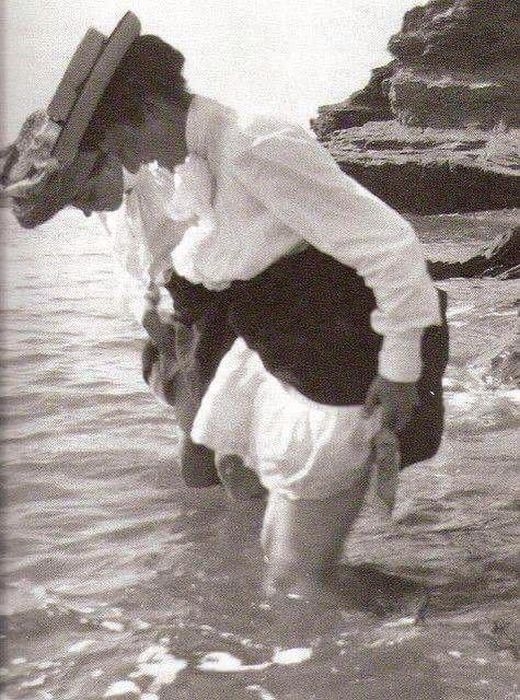 Here we present a set of old photographs of girls and women, who long ago visited the coast of the Crimea. The photos were taken during the first half, and the beginning of the second half of the last century, and the bather’s swimsuits are representative of this particular era.

Further, in the author’s words:

Some of the most famous Crimean bathers: Empress Alexandra and her maid of honor, Anna Vyrubova, in the water. (Livadia, 1913)

This lady with grapes is also among the first Crimean bathers who were photographed there. Her name remains a secret, but the place and the year are known: Yevpatoriya, 1916-th. Another stranger on the beach. Judging by the background – a city beach in Yalta. Let’s try to calculate the date ourselves. The swimsuit is still quite austere, so I would say – the first half of the 1920’s. We know much more information about this lover of sea bathing. She is a clerk of the Moscow Insurance Agency, 21-year-old Vera A. Pavlova. During a vacation at the Evpatoria resort, “New Life”, in July and August 1926, she took a few photos on the beach. A year later, she gave them to her sister, and one of her distant descendants posted them more than 80 years later in one of the most popular resources of retro photos. Very expressive photos aren’t they! Perhaps as is the model herself. Further, there are a few pictures of bathers of the 30’s. The first two photos were taken on the Livadia beach. Therefore, we can assume that the models are holidaying at a local peasant sanatorium. It is clear that they are not noblewomen. (Yalta, 1926) A bather from the group in a striped swimsuit (1931) The 1950’s are represented more widely. Two of the most well-known Crimean bathers of the decade can be said to be the residents of Trans-Baikal, Valentina Ottovna Dragoonskaya and little Tanya. In 1954, this photo of the wonderful mother and daughter was on the cover of “Ogonyok” magazine. The photographer was O.Mihaylov, and he immortalized the two bathers. Two strangers on the beach in Alushta, three years later. A lonely Crimean bather on the beach at the fish farm, which was located between Simeiz and Alupka. (1959). And this is the famous Miskhor mermaid. Well, that is not really true, there are two of them here. (1950) Two photographs from the family album of Valentina Osipova. Both taken in 1957.
Colored – at the city beach in Yalta. Black and white – on Golden Beach near Lastochka. And finally – the main masterpiece of Crimean beach photos. One of the most famous photos of «Life» magazine correspondent, Howard Suhorek. The American visited many towns and villages of the Soviet Union in the summer of 1956 and 1957. He photographed no attractions, only people. A year later, the magazine published the most striking photos, which included ones from the Crimean coast. That’s perhaps, the most expressive photograph from the “Crimean bathers” series.