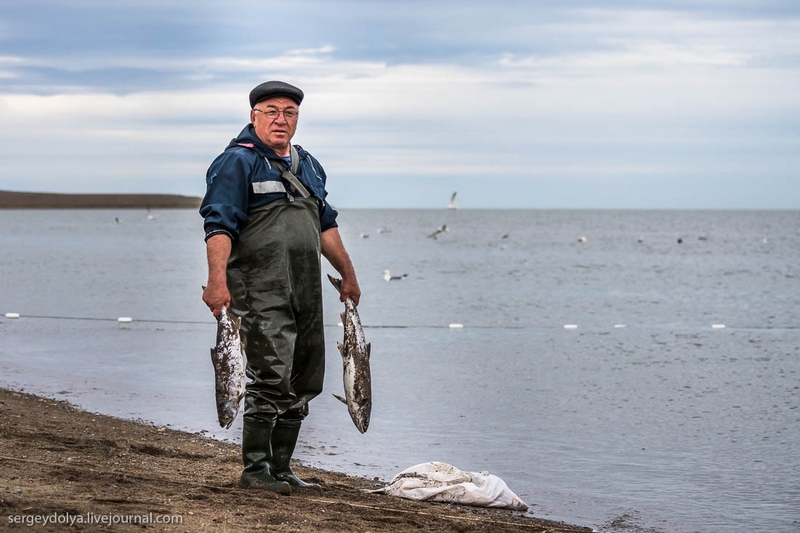 Russian bloger Sergey went there and here is his story below:

North fishing differs from the familiar one to us in the middle lane. Here people don’t use floats or spinners. Fishermen go waist-deep into the icy water and push a network away from the shore with long wooden sticks, and then watch a seal do not catch a dog-salmon.

First, a bit of wildlife that surrounds the fishermen. These are primarily Horned puffins – birds which I had taken for Atlantic puffins, but they live in the Atlantic, and Horned puffins and Tufted puffins live in Chukotka and they look very similar. Later, I’ve  learned to distinguish them, and you will also be able to do it: Right from the pier you can take photos of Anadyr belugas: Seals do the same Not all places are equally fortunate for fishing. If there is a native (Chukchi or Eskimos) in a group of fishermen, they can take the best place: And the native himself may not to catch anything: The remaining fishermen are located along a less successful shore: The point is that dog-salmon goes along the coast, very close to it. Fishermen cover the next 10 meters from the shore and fish catches in their network: To install the network, fisherman goes into the water up to his waist and pushes it away from the coast with a long stick : Some people use small inflatable boats: It’s more comfortable but longer. Nevertheless, one can put the network farther from a shore: They take only females with caviar. The rest of the fish is released: The fishermen complain that there is not enought fish. Catching becomes harder and harder When I ask: “How is that not enough? You have the whole bathroom with fish!” they respond that the bath is not full, it’s only barely filled, and still there is only one bathroom: The rest stand empty. In general, everything in the world is relative: There are trailers on the beach where fishermen hide tackle and rest: General view of the beach. 2 thoughts on “Fishing in the North”