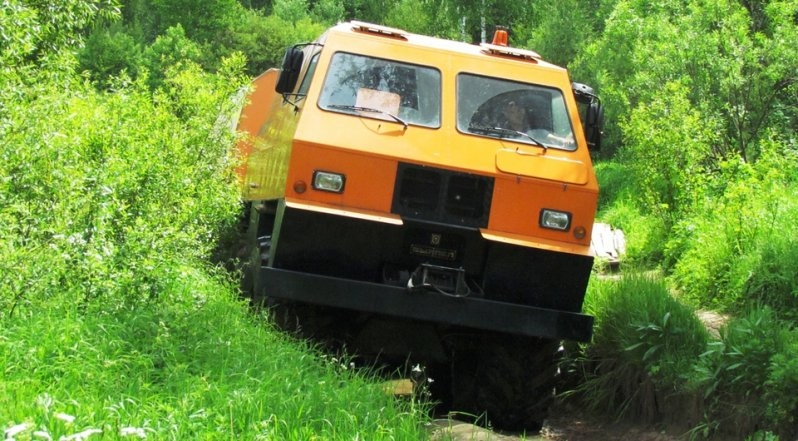 “Vympel” SPA finishes the test cross-country vehicle, which can be called as one of the most impressive Russian explorers of impassable roads!

Compared with several wheeled cross-country vehicles waiting on the territory of the “Vympel” SPA this car seemed huge! Its wheel height – is at the level of my eyes, and the car height – is near two human growths! So it is not a surprise that it surpasses all the rest cross-country vehicles that are manufactured there: its curb weight is eight tons and this 11-meter giant could carry up even six tons of cargo. I want to note that we are talking about floating cross-country vehicle – other wheeled vehicles of high permeability that could drive through water obstacles, could take one, maximum – two tons aboard. Feel the difference!

Of course, the spacious body makes it possible to load even more, but the developers deliberately limited its carrying capacity considering the use of vehicle in super difficult conditions: with such load it can easily drive through marshy terrain, deep snow or water!

Also if you need to carry not a cargo but passengers, they won’t have to shake in the cargo platform: even 10 people can sit in a separate, specially designed compartment that is combined with a cabin. So the transportation of people and cargo in this case are two different things! 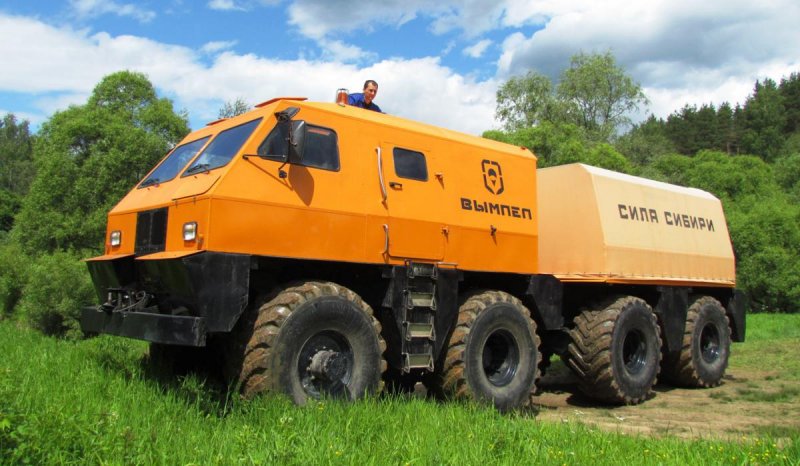 Speaking about the cabin, it looks really large – you come there and feel yourself like in a small bus! The driver and front passenger sit on both sides of the impressive housing of engine compartment protrusive into the cabin, which, like the floor, is sheathed with a metal skid resistant sheet. So you can stand up to your feet without any fear and, for example, look out of the top hatch, what I did sometimes when we were driving through the wild forest. You don’t feel any jolting on front seats – the car drives smoothly through huge hills and almost does not notice small ones. Visibility is excellent, but there are glares on the windshield and maybe to prevent them – it is needed to change its angle of inclination on a few degrees?

Behind the front seats along the side boards there are soft benches with backs, on which the passengers can sit. “Vympel’s” maximum speed is 60 km / h, so it is really convenient to sit on these benches. A driver can lie down on any of them and sleep. There are air “guns” for heating and luggage compartments under benches and in the aft of the passenger compartment there is an extra door, and if you step over the threshold you’ll stand directly on an articulated mechanism.

A four-axle cross-country vehicle made with articulated scheme!
Articulated mechanism there is not quite normal – it is patented by “Vympel” SPA. Its main difference is in the greater freedom of movement of the sections relative to each other. But the wheels of the first axle of the front section are still manageable: in the four-axle scheme when making extreme maneuvers axes move in the transverse direction, and this wears rubber out. And a rotation mechanism made on at least one of these axes saves the situation. Thus, the changing of movement’s direction of cross-country vehicle is made by simultaneous lock of the articulated mechanism and turning on the front steering wheels.

“Vympel” SPA has got cross-country vehicles with an independent lever or torsion suspension, but in this example they selected design with springs and beam axles. These axles are taken from the GAZ-66, but with a significant improvement: they are equipped with final drives applied on MAZ. Transmission is also like on MAZ – it is a 5-speed, hand-operated, manufactured by Yaroslavl Motor Plant. There are three transfer boxes: one between the sections of cross-country vehicle, the other two – between front and rear axles, taken from all-wheel drive KAMAZ. The design of the transmission includes locking mechanisms of the interaxle and cross-axle differentials – they are turned on with a lever located on the dashboard.

The engine is YaMZ-238D, which have 330 h.p Of course, they could put a more modern equivalent, but the choice is made by the customer, who says that only Yaroslavl V-shaped engine could withstand the non-stop cold in northern latitudes, from September to May, and work without shut downs for months. Moreover, it is in the simplest version, without the high-tech things: where to get parts for them if you have to repair the cross-country vehicle in the tundra or taiga?

Thus, the localization of construction of the largest cross-country vehicle of “Vympel” SPA is almost 100%: things that the company does not manufacture itself, it purchases from domestic suppliers. Even wheels – they are taken from “Kirovets”, but with clipped cleats to achieve greater smoothness when driving. Thanks to an impressive diameter of the wheel we could easily drive through fallen trees, wetlands and through the river with a steep bank during our test trip. These wheels provide 700-mm ground clearance and excellent adhesion with any surface! But there is one more important fact – just a very little pressure is transmitted through the wide tires to the ground is – in this case it does not exceed 0.29 kg / cm. This is an extremely important quality! Because the cross-country vehicle does not damage the surface layer, that is the main reason why in some northern regions of Russia in the summer it is prohibited to use tracked vehicles. Earlier it was a big problem for transportation, wheeled cross-country vehicles could not compete with the tracked vehicles by weight of the cargo. But the new vehicle of “Vympel” SPA effectively nullifies the previous difference in carrying capacity between them. Transportation of large and heavy cargoes becomes year-round!