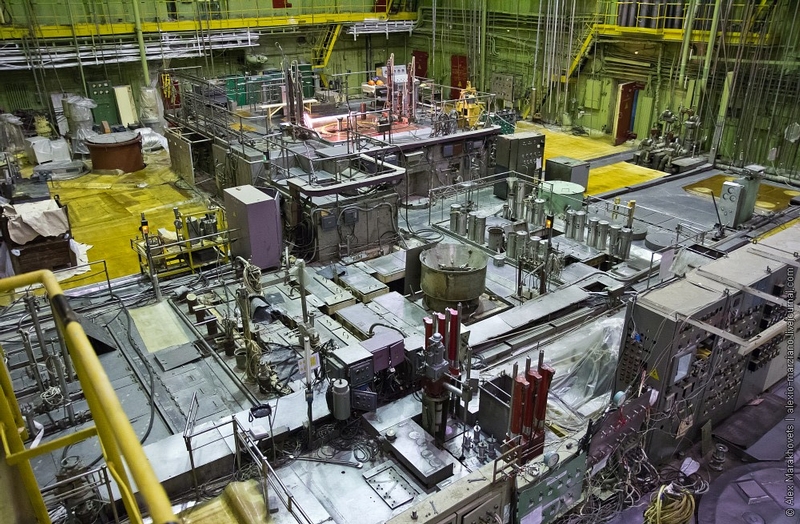 If you think that gold and platinum are the most valuable metals in the world, then you are wrong. Comparing with some artificially produced metals, the price of gold can be compared with the cost of rust on an old piece of corrugated iron. Can you imagine the price of 27 million US dollars per one gram of the substance? It is the real price of radioactive element called Californium – 252. Only antimatter is more expensive, but it is the most expensive substance in the world (about 60 trillion dollars per gram of antihydrogen).

Now there is only 8 grams of Californium-252 in the world and 40 milligrams is produced annual. And there are only two places in the world where it is regularly produced: at the Oak Ridge National Laboratory in the US and … Dimitrovgrad, Ulyanovsk region.

Do you want to know how almost the most expensive material in the world is produced and what is it made for?

At 80 kilometers from Ulyanovsk on the Cheremshan River, there is the city of Dimitrovgrad with a population of about 100000 people. Its main enterprise – the Research Institute of Atomic Reactors (RIAR), which was established in 1956 because of Kurchatov. Originally it was an experimental station for nuclear reactors tests, but now the variety of activities has expanded. Now RIAR tests various materials to explore how they behave in conditions of prolonged radiation, create radionuclide sources and preparations, which are used in medicine and science, solve technical issues of ecologically clear technologies and do a lot of scientific activity. The RIAR employs approximately 3,500 employees and have got 6 reactors. None of the six reactors are used as an energy source for heating of the city – you won’t see the giant installations for thousands of MW. The main task of these “little ones” – to create maximum neutron flux density, which the scientists of the institute use to bombard various targets, creating creating things that don’t exist in nature. Reactors of RIAR operate under the “10/10” scheme – ten days of working and 10 days of vacation, prevention and refueling. In this mode it is simply impossible to use it for water heating. And the maximum flow temperature is only 98 C, water is cooled rapidly in small towers and goes in the circle. One of the 6 reactors is really loved by scientists of RIAR. It is also the first one. And it is the most powerful, which gave it a name – MP. In 1961 it was the MP-1, with a capacity of 50 MW, in 1965 after the upgrade, it became the MP-2, in 1992 – MP-3, which would work until 2017. It is a unique reactor and it is the only one in the world. It is unique because of a very high neutron flux density, which it is able to create. Neutrons themselves are the main products of RIAR. With the help of neutrons a lot of problems like studying of materials and the creation of useful isotopes can be solved. And even to make the dream of medieval alchemists come true – to turn plumbum into gold (in theory).

Without going into details, the process is very simple – you take one substance and fire it with neutrons. Thus, for example, with neutron nuclear fragmentation of the uranium it is possible to obtain lighter elements like: iodine, strontium, molybdenum, Xenon, and others. The start of MP-1 reactor work and its success caused a great resonance in the scientific world, that encouraged the building of a high-flux reactor with a hard neutron spectrum – HFBR (1964) and HFIR (1967) in USA. The best nuclear physics including the father of Glenn Seaborg were coming to RIAR, and adopted the experience. Yet no one else could create the same elegant and simply reactor. MP reactor is ingeniously simple. Its active area – is almost a cube of 42 x 42 x 35 cm. But the dissipated power of the cube – is 100 megawatts! Around the active zone there is a special tube with different substances to be bombarded with neutrons. For example, recently flask with iridium from which the desired isotope was received was pulled from the reactor. And now it hangs up and cools down. After that, a small container with radioactive iridium will be immersed in a special protective plumbum container, weighing several tons, and a car will be sent to the customer. All used fuel (a few grams) will also be cooled, canned into the plumbum barrel and sent to a radioactive repository on the territory of the institute for the long-term storage. There is not only one reactor in this room. Next to the MP there is the other – RBT – pool-type reactor, which works in tandem with it. The fact is that the fuel in the MP reactor burns out only on a half. Therefore, it is necessary to burn it out in RBT. Generally, RBT is an amazing reactor, you can even look inside it (we couldn’t). It does not have the usual thick steel and concrete housing, and for protection from radiation it is simply placed in a huge pool of water (it is named because of it). Water column holds the active particles, slowing them. The particles moving at a speed exceeding the speed of light in the environment, cause a bluish glow familiar to everybody from different films. This effect is called in the name of the scientists who described it – Vavilov – Cherenkov. The smell of thunderstorm

The smell of the reactor hall couldn’t be entangled with anything. There is a strong smell of ozone as after a thunderstorm. The air is ionized during overload, when the fulfilled assembly is moved to the cooling pool. O2 oxygen molecule converts into O3. By the way, ozone smells not fresh, but more like a chlorine. When there is a high concentration of ozone you sneeze and cough, and then die. It is assigned to the first, the highest hazard class of hazardous substances. The level of radiation in the room increase, but there are no people here – everything is automated and the operator monitors the process through a special window. However, even after that you must touch the railing only with gloves – you can pick up radioactive dirt. But you couldn’t go home with it- at the exit of the “dirty zone” everybody is checked with the beta radiation detectors and if they detect it on you then you with clothes will go into the reactor as a fuel. Joke. But hands should be washed with a soap after visiting any of these areas. Changing of the floor

The corridors and stairs in the reactor are carpeted with a special thick linoleum, the edges of which are folded onto the walls. It is made to prevent the utilizing of the whole building, so just you can roll up an old and lay down new linoleum in the case of radioactive contamination. Cleanliness here is almost like in the operating room, because the biggest danger is the dust and dirt that can get on your clothes, skin and inside the body – alpha and beta particles can’t fly far, but if they are near they are like cannonballs, and living cells are in a big danger. Remote controller with the red button Remote controller itself looks deeply outdated, but why do you need to change something that is designed for many years of work? The most important thing is located after the shields, and there everything is new. Many sensors have been changed from recorders to the electronic scoreboards, and even software systems, which are developed in RIAR. Each reactor has multiple independent levels of protection, so the “Fukushima” couldn’t happen there. And what is about “Chernobyl” – there is not enough power, these are “pocket” reactors. The greatest danger is in the emissions of some light isotopes to the atmosphere, but this will not happen as we were assured. Physics of the institute – fans of their business and they are interested in spending hours talking about their work and reactors. A one hour for questions was not enough and an interesting conversation lasted for two hours. In my opinion, there is no such person who would not have been interested in nuclear physics 🙂 And the director of “Reactor Research Complex” Petelin Alexei Leonidovich with the chief engineer could participate in scientific programs about Nuclear reactors 🙂 If you tuck your pants into socks outside RIAR, then most likely, someone will take a picture of you and put it in the net to laugh. However, here it is a need. Try to think, why. Welcome to the hotel Californium

Now about the Californium-252 and why is it needed. I’ve already talked about the high flux neutron MP reactor and its benefits. Now, imagine that the energy that MP reactor produces can give just one gram (!) of Californium.

Californium-252 – is a powerful source of neutrons that can be used for treatment of malignant tumors, where another radiation therapy is useless. Unique metal allows to shine through reactors, aircraft parts, and to detect damages that usually carefully hide from the X-rays. It helps to find reserves of gold, silver and oil in the ground. The need in it is very high, and customers sometimes have to wait for years to get a microgram Californium! And all because the production of this metal …. takes years.

For the production of one gram of Californium-252, plutonium or curium is subjected to prolonged neutron irradiation in a nuclear reactor for 8 and 1.5 years, respectively, passing almost the entire range of transuranic elements of the periodic table. The process does not end on this – Californium is produced for a long months from the products by chemical means. It’s very, very hard work. Micrograms of the metal are collected from atoms. This explains why the price is so high. By the way, a critical mass of Californium-252 is only 5 kg (for metal bowl), and in the form of aqueous solutions of salts – 10 grams (!), which allows to use it in a miniature nuclear bomb (!). However, as I wrote before, there are only 8 grams in the world and it would be very wasteful to use it as a bomb 🙂 And the trouble is that after 2 years there remains only a half of Californium, but after 4 years, it turns to dust on other more stable substances.

In the next part I will tell you about the producing of fuel assemblies (FA) and another important and necessary in nuclear medicine isotope Molybdenum-99 in RIAR. It will be really interesting!