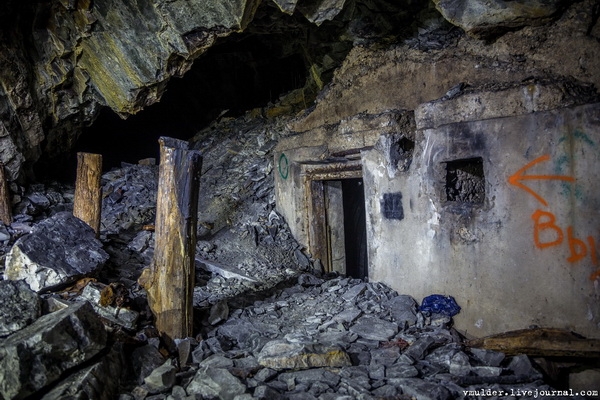 This is the place of installation of one of the guns of a three-gun battery No. 714 of the Novorossiysk naval base of the Black Sea Fleet. Few people know about it, all paths to this place have overgrown with thorns.

Unlike Zubkov battery, this battery is not so heroic. The battery accepted its first fight on 23 August 1942.

Captain Mikhail Petrovich Chelak was awarded the Order of the Red Banner for courage, 10 battery fighters received orders and medals for courage and bravery during the battles for Novorossiysk The gun rotating on this flange was located here. I wonder what was there, was there any underpass, or it’s just a small well? I was disappointed when I got inside. Nothing interesting. Here is another interesting place. It seems to be an ordinary beach – a garbage hole, there just were no boobs and asses, because that day was cool enough. To my surprise, the object was absolutely not littered or a chestnut. No homeless, crap, and almost no waste. In general, you can live here and not to hire accommodation in Gelendzhik. Hypothetically, if you dig for the water there, the place becomes a paradise. Built-in free air conditioner and the sea within a stone’s throw. There are such barracks like these. I wonder why they were built, used, and in general what they needed for? Some people write that it was a large bomb shelter, some write that the command post was reserved and connected with a battery similar to Zubkov battery, and some write that there was a military hospital at the time. This looks like a real underground town. It reminded me of a new camp from the Gothic game. I even get nostalgic. One of the best games. This place reminded of Lee house from Gothic. Graffiti, though existing, is not conspicuous. It is difficult to understand where they led and what were connected with, because some part is blocked, and this cavity has already occurred naturally. Let’s see where a small turn to the left leads. Suddenly… underground cactus. XDDD))) Cactus is something I definitely did not expect to see. Well, I have recently played 48 EN – there it is, the bonus location. That’s all of the object. Well, perhaps it’s time to get out.