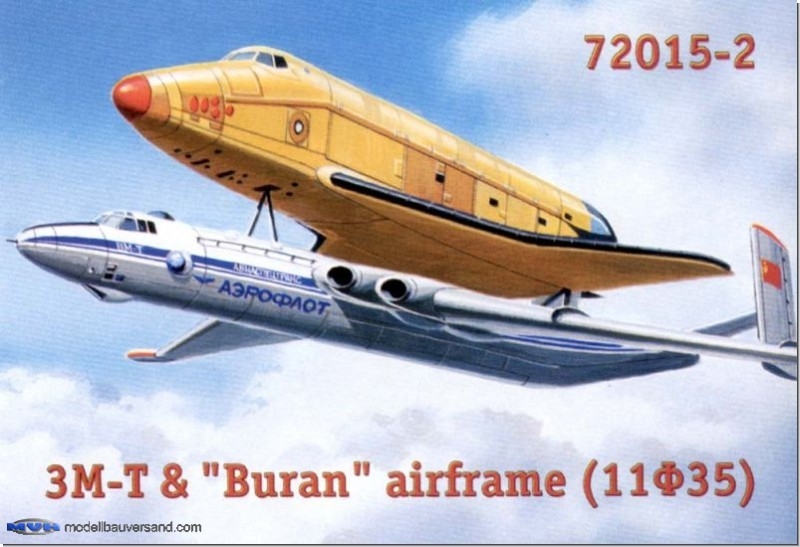 With the advent of a space-rocket transport system Energy – Buran it became necessary to transport certain large components to the Baikonur Cosmodrome. The Ministry of Mechanical Engineering held a meeting on this issue.

Options such as building factories directly in Baikonur, or a special train (or car) track, or building a navigable channel leading to Baikonur, or the creation of an airship, were not appropriate. It was assumed, for example, to carry components with two helicopters, however, the Aviation Agency said that the cargo could easily be dropped. It was decided to carry the load on the back of VM-T “Atlant” (3M-T). Developed technical solutions chased one goal – to deliver the goods to the destination and to not do any harm to the transported goods.

The largest of these (in size) was the hydrogen tank, which was to be equipped with a removable transportation frame with fixing points to mount it on the plane, a front fairing and rear streamlining, giving the object a reasonably aerodynamic shape. Rocket tanks are a very delicate cargo. During transportation, the hydrogen tank was inflated with nitrogen and sealed.

The pressure was continuously monitored by measurement systems during the flight. In case of depressurization, it would become impossible to land and or to even decrease the altitude of the aircraft because the gas could not counteract the fast growing external pressure. Losing its shape, the tank, would inevitably lead to the loss of not only goods, but also of the aircraft VM-T “Atlant” (3M-T). VM-T “Atlant” with 3GT cargo at the airport Only three aircraft were built, one of them was given to the Central Aero-Hydrodynamic Institute for tests Currently, one of the copies of the VM-T is at the airport 360 Aircraft Repair Plant in the village of Diaghilev in Ryazan Oblast.
“Currently, the aircraft, which was in a very poor condition, is being cleaned and touched up,” said the representative of the aviation sports club, who took patronage over the unique machine. According to him, the aircraft has remained within the compact cabin. But there are no visitors allowed. “Firstly, there is little space inside it, secondly, there are still mounted squibs, that is unsafe for people.” Transportation of “Buran”. The picture from the “Soviet Military Power”, 1985

Transportation of “Buran”. The picture from the “Soviet Military Power”, 1985
This idea was met with skepticism by many aviation experts.There was a lot of doubt. How was it possible to place loads on the finished glider that exceed some of its dimensions? How to overcome the sharp increase in drag without compromising the basic flight data of the aircraft? Transportation of the shuttle Endeavor “on the back” of a Boeing 747, US Transformation of 3M aircraft into VM-T “Atlant” transporter of goods has demanded an amendment to its layout changes.

The placing of goods on the “back” of the aircraft became possible after lengthening the fuselage by 4.7 m, which was carried out by replacing the tail section slightly elevated at the expense of “oblique” insert to avoid collisions with the ground when landing and takeoff with large angles of attack. Instead of a single-fin vertical tail there was found a significantly larger (up to 26% of the wing area) twin-fin made ​​in the form of two washers fastened obliquely on the ends of the stabilizer, which helped to reduce loads on the fuselage. The wing and the rest of the fuselage (including the cabin) were not subjected to changes in size and shape, neither were the nose or the main rack of chassis.

According to the test results and the identification of the weakest points, they were strengthened or replaced, ​​new panels of the wing and fuselage were made and the framework was updated. For the accepted five layouts of the aircraft studies were conducted on aerodynamics, stability and the control of flight. For each variant of the goods there was determined their unique placement on the fuselage (for length and height), on the basis of the conditions:
– a decrease in drag;
– limiting of the dispersion of moment characteristics;
– getting the desired centerings;
– weakening of the dynamic influence of vortex shroud, coming from the goods, and gas jet engines on the tailplane (buffeting). On both flying “Atlantas” in the 80th of the last century there have been over 150 flights on delivery to Baikonur Cosmodrome of all large-sized elements of the Soviet shuttle Buran and the carrier rocket Energia.