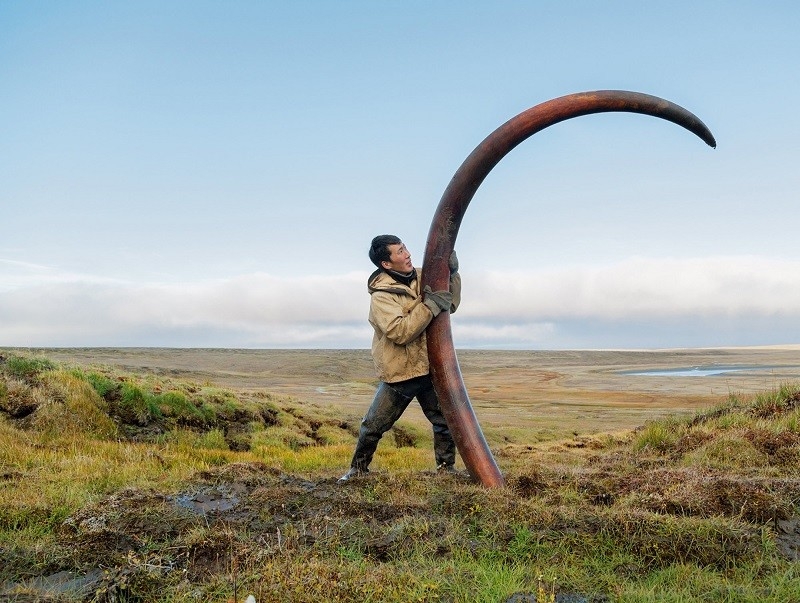 About 10 thousand years ago, Northern Siberia and Yakutia were inhabited by long-haired giants called mammoths. The now extinct genus of mammals suffered from increased temperatures at the end of the last ice age, which resulted in flooding and reducing their habitat. The animals were trapped on isolated islands without the slightest chance of returning to the mainland. Some populations trapped on these land areas in the East and in the North of Siberia remained there for some more time, and became extinct around 3,700 years ago. Nowadays the relics of mammoths, their tusks in particular, are considered to be the most common fossilized assets in Yakutia and Siberia. Scientists estimate the reserves of this ancient material in Russia at about hundreds of thousands of tons, and their annual production amounts to 20 to 60 tons. Given the volume of the produced relics, one can only imagine what a great number of mammoths lived in these lands in those days. Well-known award-winning tusks curled into spirals up to 4-4.5 meters, their weight was 100-110 kg, and their diameter was 18-19 cm. The indigenous people of the Northern regions, who often found tusks washed off by the spring waters, believed that the giant animals moved under the ground, only showing the “fangs” above the ground. They called them Eggor, i.e. Earth Deers. According to another legend, the mammoths had lived as early as the time of creation. Due to their enormous weight, they used to constantly sink into the ground to their chest. In the paths created by mammoths, rivers and streams formed, which ultimately resulted in the complete flooding (there is a legend that during the Genesis flood, the animals wanted to be rescued on the Noah’s ark, but failed to fit in there). For some time afterwards, the animals swam in the vast waters, but the birds that sat on the tusks condemned them to death. The folk art of bone carving flourished throughout the European part of Russia and Siberia up to the mid-XX century. Local carvers made combs, boxes, miniature sculptures and watch stand exclusively of mammoths tusks. This material is very beautiful, plastic and durable, though it is somewhat difficultin processing. Its hardness is equal to that of materials like pearl, amber and coral. Mammoth bones are easily handled by chisel, acquiring a gorgeous mesh pattern, and due to their large size, they can be used for almost any sculptural form. The tusks of mammoths are extracted from the permafrost through the hard work of the explorers. Their extraction is quite complex, since this ancient material is often discovered in swampy areas, and in the river beds in the tundra. Frequently the tusks are found along the banks of streams, lakes and ravines. To extract a single artifact, may require several days of continuous excavation. Today, virtually all extraction of mammoth tusks in Yakutia is illegal, and about 90% of the extracted “valuables” go to China in the end, where the ancient tradition of ivory carving is very much valued. Rapid growth of the demand raises some concern with the researchers, as it results in the loss of valuable data about the animals that lived in this area, the tusks of which contain information about the climate, forage and the environment. Perhaps, permafrost in Siberia and Yakutia still contains millions of mammoth tusks, but it is getting harder to find them every year. Currently, a kilogram of high-quality mammoth bones costs about 25 thousand rubles in the black market, and in the antiques shops in China, the price of a single tusk that is skillfully enriched with carving may reach a million dollars. 4 thoughts on “Production of mammoth tusk in Siberia”