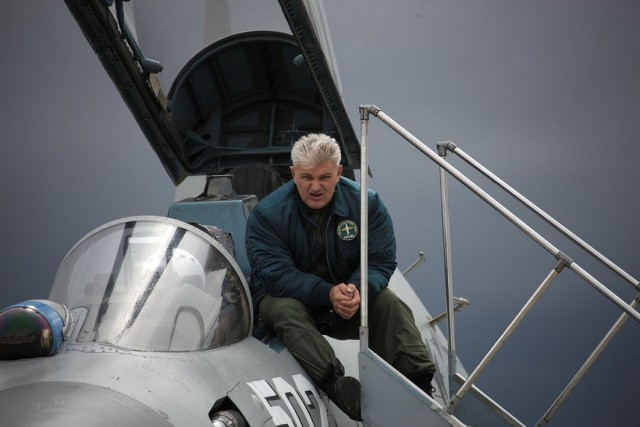 The Book of Guinness World Records is one of the most respected encyclopedic sources that can prove or disapprove some fact, settle some dispute. Russians have made their contribution to the Book as well. These are the main thirteen achievements from Russia. 1. Swimming from Chukotka to Alaska.

Swimmers from Krasnoyarsk Nikolay Petshak and Natalya Usacheva overcame 134 km in the Pacific and Arctic oceans from Chukotka to Arctic, and set the world record of the longest swim in the ice cold water. Thereby they were given the right to carry the Olympic torch in 2014. 2. The biggest crowd in swimsuits.

At the skiing resort in Sheregesh of the Kemerovo region, more than a thousand people snowboarded down the hill in swimsuits. The previous record of the same kind belonged to Canada (250 half-naked people). The next record was planned for today, April 16th 2016, by the way (2000 snowboarders!) – how is it going, we wonder?

The sports record was set by a traceur from Saint-Petersburg Eric Mukhametshin. He rebounded from the wall with a better result than English sportsmen who’d had the previous best achievement. Eric turned a somersault from the wall for 3 meters 20 centimeters – it’s 16 centimeters more than the English guys had had. Eric even managed to jump over the car passing by. This record belongs to Vladivostok (city in the Russian Far East), whose 27 thousand citizens formed the biggest state tricoloured flag. The general length of the flag was equal to 707 m. The previous record belonged to Pakistan (24200 people). Tha flashmob carried out on a really hot day was called “I love Vladivostok”. The highest number of children born by one and the same mother – 69. This record was set about 200 years ago by a Russian peasant and it still remains unbroken. 6. Record of a musician Victor Zinchuk.

In 2001 virtuoso-guitar player Victor Zinchuk played “Flight of the Bumblebee” of Rimski-Korsakov at a very high speed – 270 strikes a minute. Zinchuk produced 20 pitches a second adn finished the composition in 24 seconds. His record was broken in 2008 by a Brazilian guitar player Tiago Della Vega, who managed to play the same composition with the speed of 320 strikes a minute. Irina Rodnina is a famous Soviet figure skater, three-times Olympic and ten-times world champion, Russian public and statesperson. Merited Master of Sport of the USSR. She never lost in any competition for all her professional career and got the record number of medals, 33 of them are golden.

Eyzhena Pelsh is included in the World Records Book as a youngest diver. At the age of 14 she dived in the waters at the Antarctic shores. Her father is a TV star in Russia. The previous youngest diver was 20 years old.

9. Records of a Russian strongman.

Alexander Muromsky is a captain of a power team “Russian Bogatyrs”, on May 7th 2015 he set his ninth world record by bending 10 mm twelve metal bars against his head. Previous records of the strongman deserve respect as well – tearing eleven 1000 paged reference books in a minute, breaking 23 metal bolts 30 cm long, 12 mm in diameter for the same period of time.

Lev V. Kozlov is a 52-times world record holder in Aircraft sport, general-leutenant of aviation, merited military pilot of the USSR, sniper pilot and international master of sport. He was included into the World Book of Guinness Records for the around-the-world flight by aircraft An-124 “Ruslan” in 1990 (Melbourne – South Pole – Rio de Janeiro – Rabat – North Pole – Yelizovo (Kamchatka) – Melbourne). It took him and his team 72 hours 16 minutes to fly around the globe over all seas. This flight broke seven world records and ten all-Union records. Vladimir “Dynamite” Turchinsky is a Russian TV and radio presenter, sportsman, showman, actor and businessman. His tricks noted in the Book of World Records were very spectaculous: he moved 260-tonned aircraft “Ruslan”, supported an elephant on his hands (3,5 tons), lifted a car with twelve passengers, pulled 30 sportsmen in a double-end competition, dragged a 20-tonned double-decked bus for 100 meters with his left hand only. Evgeny Grishkovets, actor and author of unusual spectacles, showed five one-man performances for 8,5 hours on the same day. He spent 8,5 hours on the stage being the only actor of each show. Spectators were changing. Valentina Zakoretskaya began to jump at the age of 16. She was all about that and was included into the Book of Guinness World Records thrice – in 1976, 1987, 1998 as woman with the highest number of parachute jumps in the world. She has done it over 11500 times! Only two men managed to leave her behind.