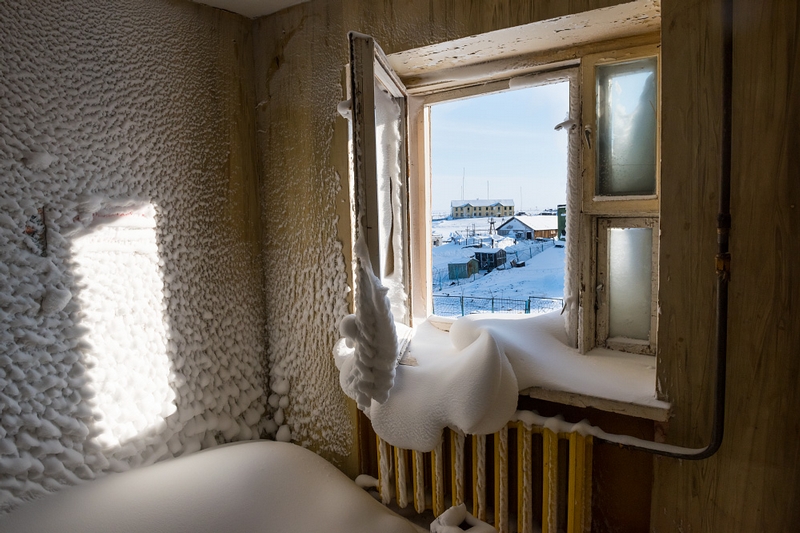 Blogger Ivan Dementievsky has had a long trip this March, Tiksi (Yakutia, Russia) was the final destination. He came there at night and could not see much, but high snow. At dawn he found out how vast, devastated and lonely the snowy place looked like. It is strange to see these houses abandoned. Some are still on sale but probably noone will prevent you from settling there for free. Some snowdrifts are phenomenally high, at least it’s fun for children – they slide down joyfully. Tiksi is divided into at least two parts, the remote one at the airport has a wonderful pillar signpost with different cities and distances to them. You can imagine the blizzards here, they may last for a couple of weeks. Perhaps, after all the town is fully covered with snow. There are several big streets in Tiksi. The central one has some wood houses – their windows nailed up but snow is getting inside through the small holes anywhere. It seems the town could be a wonderful movie set. However it’s hardly possible, as Tiksi is situated on the borderland. Do you often see icons in airports? Local weather conditions make people afraid so they try to calm them down somehow. They sell ordinary canteen food – the price is a bit cheaper than in Moscow, but more expensive than in many other Russian cities. Food in shops must be very expensive here. Hello from the Soviet past. Here was a school, only posters that promise happy future and safety, remain. Probably these houses seemed to be rather modern and cool when they were erected. At the same time Tiksi has a lot of wood structures. They believed, aspired and worked… “Russian border is sacred” – this was probably the building of the border guards. Quite surprisingly they have a new church here. Does it help somehow? Maybe it would be better to build a boiler-house here? Port covered with snow. You don’t wanna see what it hides… Seems people left an hour ago and never came back… They high we go, the higher snow is. One can try to ski here. Come and live, if you wish…