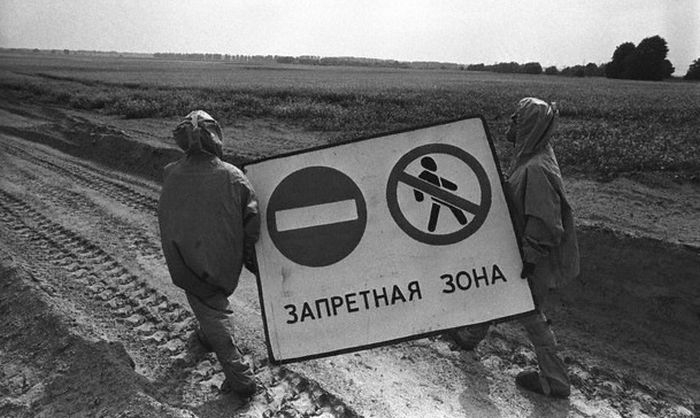 “Prohibited area” of the Chernobyl NPP.

For accident management they used different kinds of vehicles, including home made ordinary cars and innovative foreign equipment.

Let us show you the first photos taken after the catastrophe. The author is Igor Kostin, a popular photographer. Equipment cemetery right in the water. In the background – the burial of medical RAF 22031. Car of liquidators. It had rare parts and was further used eccessively (why does it have to be wasted?), nobody cared much it was highly radioactive and dangerous to people… “Roof cats”. Young soldiers (20 years old or so) are about to climb the roof to take a Chernobyl “sun bath” and get a nuclear suntan… Such “suits” weighed almost 20 (!) kg! All its elements made from lead – lead aprons, lead sheets, lead jacket, tarpaulin boots with lead inner soles and even a lead capacity for their testicles…

They had to hadle a shovel in a hurry removing trash from the roof.. 3828 young boys were there, on the roof. 3828 broken human lives. 3828 nameless heroes. It’s an official number, who knows the real one? Who remembers them now, the guys who protected other people? Almost finished “Shelter”. And private transport means of liquidators on the site. You know what happened with this Soviet car after all… Ship breaking yard. These ships carried materials and parts of the shelter to the industrial site. Liquidators themselves lived in floating hotels. Most of those ships were finally wasted! Many fo them sank mysteriously. “Rassokha”. It does not exist today. One of the iron heroes that was participating in the clean-up operations.

All that equipment was remelted! Soviet space researching robots STR-1. They were cleaning the roof of the plant from radioactive debris and litter. In the photo – specialists of plant “Jupiter” (Chernobyl) prepare the robots for works. Scrapers MoAZ participated too. They were digging out soil in Buryakovka, removing the polluted upper layer. Robot on the roof of the third power plant unit. Its inside was simply destroyed from that hellish radiation. The dose under the shelter is still very high. Being there for a long period of time is lifethreatening.

Sometimes robots were falling from the roof. Both foreign and Soviet were applied, but all of them could not stand it. They were working till the last. A German robot “Joker” took a short ride along the roof of unit 4 and got stuck. While they were trying to set it free, it got absolutely destroyed by radiation. So they took a hard decision to send people climb the roof for its cleaning… They were digging under unit 4 to create a freezer, but finally everything was filled with concrete, became a part of the foundation. Labor of miners from all over the country was huge and priceless. They were in hell. With no fresh air, in cramped space, with shovels in their hands, uncomfortably bending over. This Nysa 522 was surprisingly in the zone too. This vehicle was made in Poland. They were buying foreign cars including Mercedes. But its role is not clear, how could it help? Yanov station. These trains were carrying necessary materials to the destroyed station. The accident could pollute drinking water water by contamination of the aquafier. To prevent it they created a biological wall from cast concrete –  ten meters deep, it separated the pool from contaminated water. For that operation they applied Cassagrande excavators. They could do many things – digging, drilling and more.. Another interesting vehicle in the zone. Final shelter building works. KrAZ is putting slabs, that will be further asphalted. Cocrete pumps are filling the last holes, the pumps will be disposed soon.

2 thoughts on “Chernobyl Accident Reaction: What Vehicles Were Used”