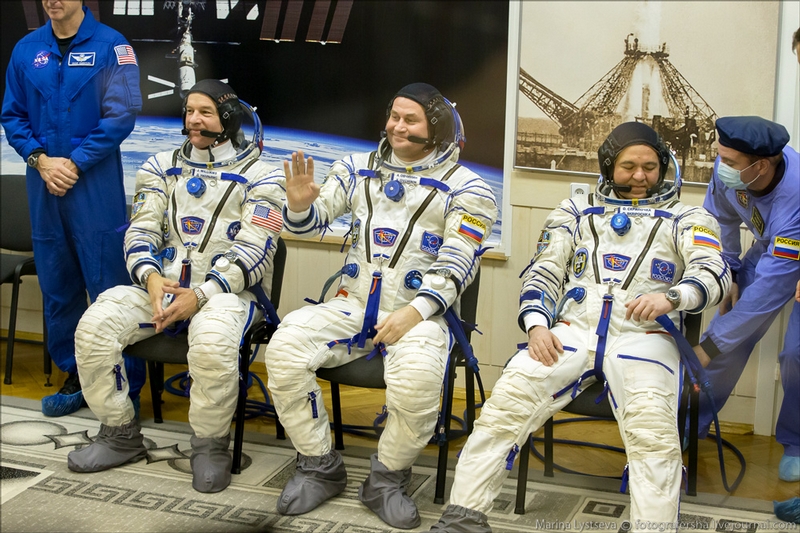 Space suit blowdown is carried out prior to each flight several hours before the launch. Journalists and relatives come to see how space suits of cosmonauts are proofed for impermeability. Then they have some time to talk to their families.

Before leaving the hotel, the cosmonauts sign on doors of their rooms with black markers. It’s a tradition kept since the Soviet time. To the music of a popular Russian space song the crew come out of the training center and get in the bus to head to the cosmodrome. A specially equipped bus transports the main crew, another one carries backup crew members. The buses are followed by the police. Relatives of the cosmonauts, journalists and space tourists come to the launch pad too. Soon we are invited to a special room with purified air and a glass partition, where the crew members appear dressed in space suits. Cameramen do their job. Commander of the crew. Commander takes his place in a lodgemen first. Lodgements are custom made according to individual physical features of cosmonauts. Now they put on a full pressure helmet and gloves and then proof the space suit for  impermeability. Each suit is provided with a ventilation system – some canals are used to supply conditioned air to the entire body, others are used for air suction. The inside of the suit is rubber-fabric, the outside is fabric only. Americans use nylon, Russians – kapron. It protects rubber from damage. The observational mode requires relatives to stay away, so the crew members in their suits are behind the glass partition, they use microphones for communication with families. – Father, why do you need so many watches?
– A watch, a barometer and a computer. The latter will let the cosmonaut know if any systems stop working properly. Father promised to the boy that he would check how he has learned the multiplication table when he comes back. When they are finished with the space suit blowdown, all journalists and operators are asked to leave. March 19th, 00:24 – cosmonauts appear ready for a flight. They carry suitcases with life sustaining equipment inside. Reporting to the senior staff of “Roscosmos”. Cosmonauts raise the glass of their helmets in any weather, even when it’s freezing cold. The report is brief. The crew is about to go to the launching site №1 which is also called “Gagarin’s launch”. The cosmonauts use an elevator to get to the spaceship, then they have to undergo the pre-launch check of all systems. The codename of the new crew is “Burlak” (“Hauler”) after the name of Rybinsk – the capital of haulers. Launch vehicle. They use only ecologically clean fuel components for all “Soyuz” spacecrafts – kerosene and liquefied oxygen. Steam appears as a result of liquid oxygen evaporation. Thanks to fotografersha for the photos!

1 thought on “Cosmonauts Getting Ready for a Flight”