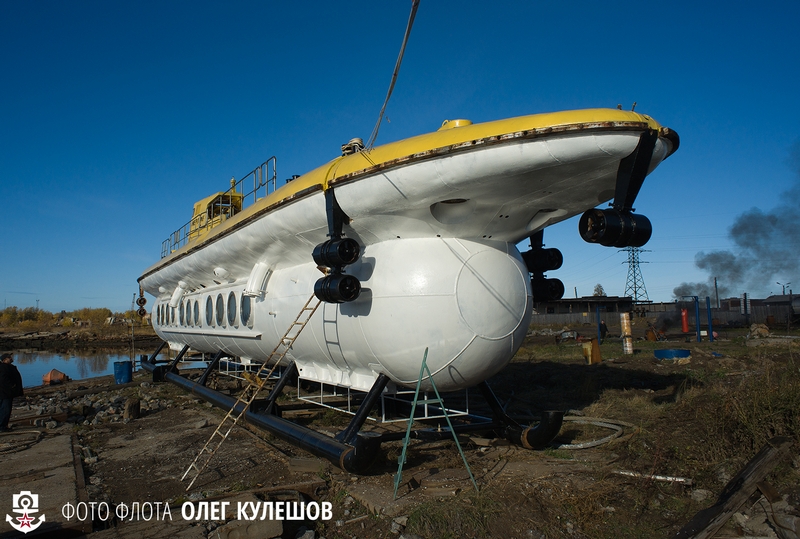 In 1991 they launched a very unusual submarine in the Severodvinsk dockyard in Russia – many illuminators on its sides and bright yellow color. No torpedo launchers and missile compartments, of course!

Western secret service would go crazy if it had a chance to see it! “What is this? Any Soviet secret weapon? Why so many illuminators? Underwater intelligence apparatus? They build large nuclear missile carriers and this thing is so small… Small but utterly dangerous??” Nothing of that kind! 1991 was the year of the country collapse, so everything is much simpler. It was “Neptune”, the first excursion submarine built in the Soviet Union. “Neptune” was intended to be used at the depth up to 60 meters. The tourist submarine is 28 meters long, it’s made from steel 1,5 cm thick. In the deck erection are accumulator batteries, rowing mechanisms, powerhelm unit and other equipment that makes the diving system work. Like any other submarine, “Neptune” has ventilation and air conditioning systems, water supply and equalizing-trim systems, navigation instruments, means of communication, surveillance and control, tow and mooring devices. In early November 1992 the submarine was delivered to Antigua. It was maintained by Russian specialists. Having worked for some years in the waters of the Carribean sea, it arrived at Severodvinsk for repair and modernization where was finally removed from service. It had been there for ten years before it was bought by a private company that plans to take it to Moscow and use it as a museum – cafe. But it is still in Severodvinsk. Let’s hope for its better destiny! Thanks to Oleg Kuleshov for the pictures and the story!