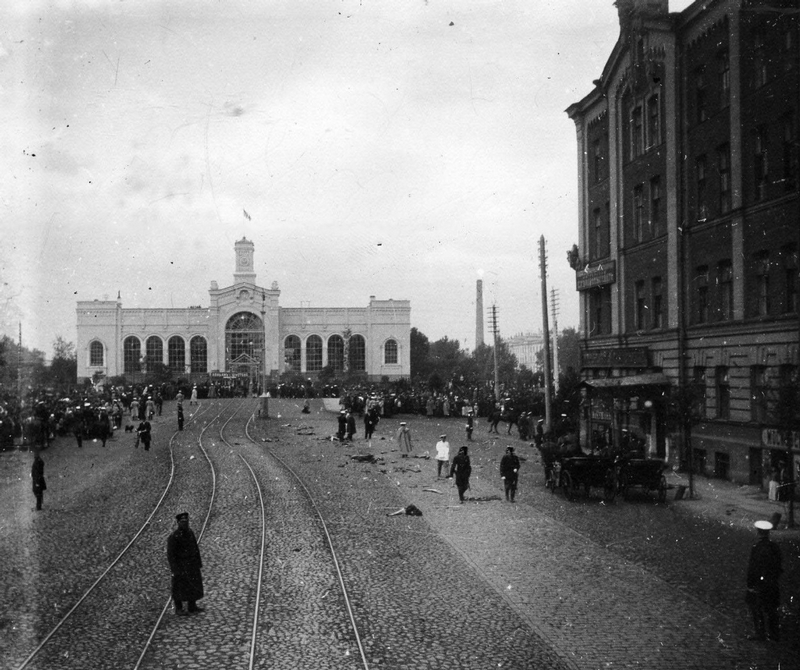 Vyacheslav Konstantinovich von Plehve was the director of Imperial Russia’s police and later Minister of the Interior. He was killed by a socialist-revolutionary, student Yegor Sazonov, who threw a bomb into his carriage. The reason was Jew bashing in Kishinev in April 1903. Those events were used by all revolutionary parties of Russia who put all the blame on Plehve as he was resisting them through the entire period of his rule in the Ministry of the Interior. Place of the carriage explosion on Izmailovo Avenue.

The murder was organized by socialist-revolutionaries who considered terror was the only efficient method of opposition. The leader of the murder operation was Evno Azef. The plan was the following: to trace daily routes of the minister to Tsarskoye Selo for reporting to Nicholas II and then to send a group of fighters to a particular place. Azef personally chose candidates. The murderous assault was planned for March 18, 1904, but the operation failed. Abram Borishansky, one of the candidates, felt he was under surveillance and deserted his post.

Another attempt was planned for March, 24. Borishansky, who wished to be trusted by friends again, participated in chasing Plehve as well. But minister chose another route that day.

They tried again on April, 1, but шт the early hours that night one of socialist-revolutionary died from bomb explosion in hotel “Severnaya”. Police began investigation and all terrorists hastily left Saint-Petersburg. Their plan was postponed for an indefinite period.

Cowards were explled from the organization by Evno Azef. Another assassination attempt was made on July, 28. Borishansky was walking with a bomb, he had to let the Plehve’s carrige pass by. The terrorist was followed by Yegor Sazonov, who had a “tail” of other socialist-revolutionaries. They would need to throw their bomb, if Sazonov would miss the target. Borishansky would play the game if the carriage turned back.

When Sazonov saw the carriage he stepped aside the pavement and threw a bomb into it. Plehve was killed from the first hit.

Later, when Sazonov recovered from injuries in prison, he wrote in his memoirs that he was praying that day to kill his victim with no chance for survival.