This object built in the Soviet time in the Crimea resembles a huge glass, but water is not poured inside but in between the glass walls. On top are big storm creating fans. On the bottom of that glass is a tower.

It’s like a small water collider – thought by many as strange and unnecessary, wrapped in mysteries, real and fake stories, some even believed in dolphins swimming between those glass walls.

But what is this object really for? Why was it built? Let’s check this out. 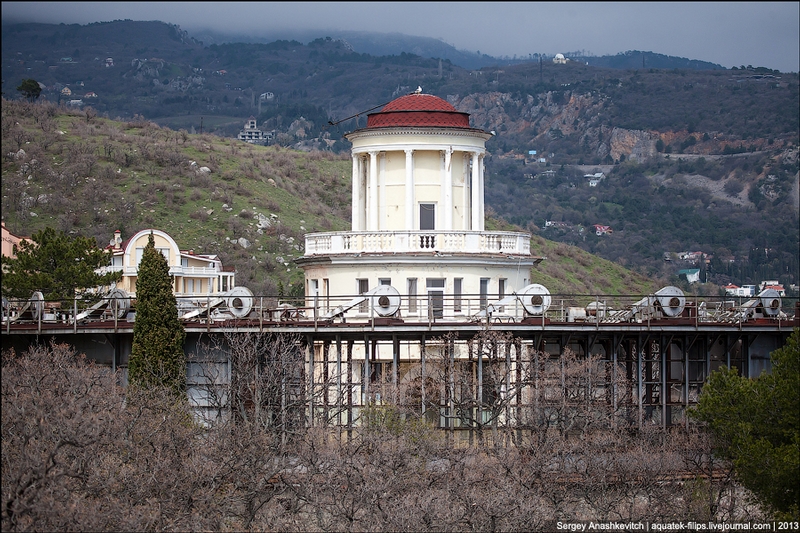 Katsiveli village in the Crimea. This is that very tower on the bottom of the “glass”. Back in the 1950s here was an experimental facility of the Marine Hydrophysical Institute. This place has three scientific objects – instrument rock, oceanographic platform and storm pool. There is an interesting heliostation in this place and a radio telescope – one of the biggest in Europe. The storm pool was built in 1953. At the entrance of the storm pool. In fact it’s a unique construction. It has a shape of a closed ring, that’s why the way of waves have neither beginning nor end, they are continuously influenced by the wind and grow higher and higher – just like it happens in the sea. Where does the wind come from? It’s produced by huge twenty one 40-meters fans located on the roof of the tower – they pump air in the canal between the walls of the “glass”. The gates of the pool. Inner yard of the pool. There were scientific and living premises in this tower, built in neoclassic style. Looking at the pool from the entrance of the tower. The apertures used to be covered with thick glass. Entrance of the living tower. We are going up to the tower. Looking at the glass of the pool from the roof of the tower. On the roof are those big fans. Outer diameter of the ring – 40 m, width of the canal – 2 m, height from the bottom to the roof – 5,6 m. The lower 2,5-3 m of the canal were filled with sea water. Looking at the ring from outside. The tower looks so much Soviet! However those things on the windowsill are from the modern epoch. Let’s go up closer to the fans.

Four nozzles are like fingers of an iron robot. The fans created wind with speed up to 19 m/s. As a result they had big wind waves: 1,5 m high, 15 m long, interval up to 4 sec. From here we may see the oceanographic platform. Finally we are inside. The storm glass from inside. See the nozzles of the fan? Now it’s getting rusty and no storms are raging in the glass. People say that the pool was not highly demanded even when it was functional, but they did much research anyway.

Some scientists say that the structure did not consider centrifugal force, that inevitably appeared in the circular motion and considerably influenced the process of wave formation, so tha idea was allegedly wrong and the structure remains the be the monument of the Soviet engineering thought. However, we are not sure about the truth. Some really say they placed dolphins in the glass for research, but it’s too hard to believe as no gates are available for them to get in or out. Unusual structure in the beautiful place, how long will it stay?

Thanks to aquatek-filips for the photos and the story!

10 thoughts on “Abandoned Storm Factory of the Crimea”