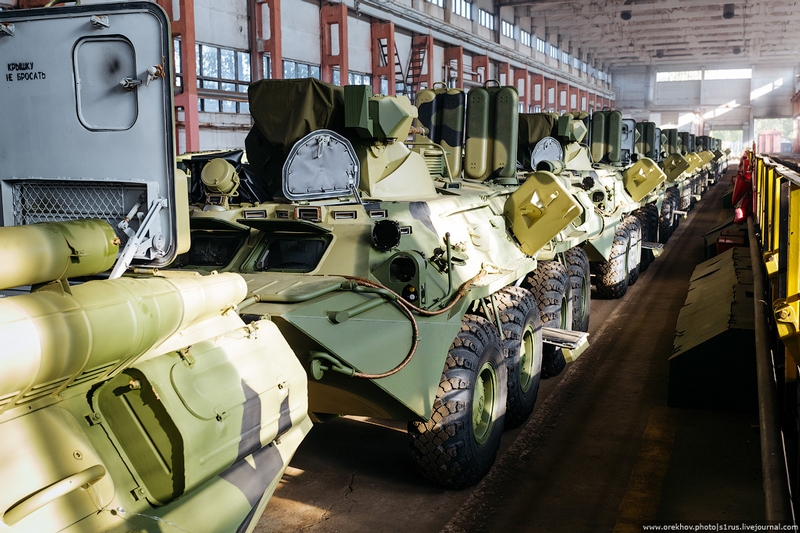 “Arzamas engineering plant”, JSC. is one of the leaders of the defence industry complex of Russia and the leading engineering enterprise in Nizhny Novgorod. It is also the only enterprise that makes wheeled armored vehicles cooperating with 35 countries.

The plant began its work in 1972 as a car maker. In 1980 it made its first armored troop carrier.

The most famous of its products are BTR-70 and BTR-80 armored troop carriers, multipurpose cars of “Tiger” family, medical cars BMM, wheeled maintenance-recovery vehicles BREM-K and unified chassis UNSH. The plant not only produces machines, but also maintains and repairs them. “The plant is proud of them”.

There are two shops for components production, an assembly shop, a warehouse for ready products, a test ground, a boiler house on the territory of the plant. In a shop for components production. Most of components for “Tigers” and BTRs are made right here.

The plant employs 4000 people, 900 of them are young specialists. In the Soviet time the plant could boast of 10000 employees. Assembky-test shop where begins the production of armored troop carriers. There are twenty one vehicles on the conveyor at the same time, they gradually come through all assembly stages. The full process takes five workdays. The process begins from putting armor of a future BTR on the conveyor. At the initial stage of work they run line and wires. BTR is moving on the conveyor. The work is arranged in the most efficient way. Armored troop carrier is equipped with a KAMAZ diesel engine and a gearbox. While vehicles are on the conveyor they have temporary wheels. Armored vehicle “Tiger” has diesel engine YAMZ-534 with a turbocharger and power 215 hp. When a vehicle is assembled and adjusted, it starts undergoing the full cycle of tests, that takes four days. The test run is 100 km with a factory driver and extra 50 km with a customer’s  representative. Multipurpose cars of “Tiger” family are rather popular, it approved itself in antiterrorist operations, security service and escorting columns, patrolling and execution of different special missions. The run is partially held in water. BTR inside – the space is used with the highest efficiency. It’s hard to believe it can accomodate ten armed soldiers. Driver’s seat. Look how many documents are there on the next seat.