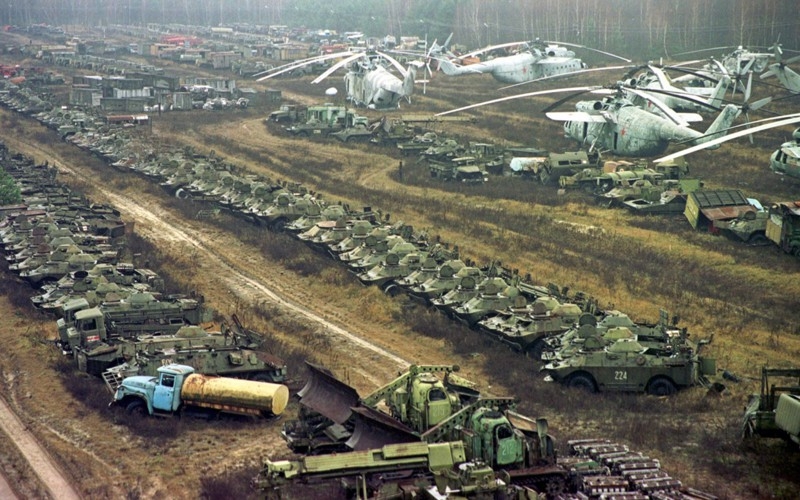 Meanwhile in Chernobyl interesting things are happening. During the Chernobyl catastrophe there were hundreds of army vehicles, including combat vehicles, tanks and helicopters used to operate in first days of the disaster in Pripyat. All those vehicles got very radioactively polluted and afterwards they were all stored on a special strip of land in Chernobyl. Hundreds of vehicles. However the most recent satellite photo shows.. they all have disappeared! Let’s see inside: This is how it looked before. Hundreds or even thousands of radioactive vehicles dumped on this field. However now it looks like this: They all are gone!

Some people suspect that they were stolen. Others say it might be used by Ukrainian army during recent conflicts, as the argument they post a video from Donetsk or somewhere near with a captured radioactive tank:

Others tell the stories how the vehicles were already heavily looted for parts despite they were guarded pretty much. However during recent years the radioactive auto parts surfaced a few times on the market in Ukraine. So others now afraid that all this metal could be scrapped and now used in recycled new products in Ukraine or Russia.

Anyways to refresh the memories, here are some of the vehicles that were stored there: What do you think, what has happened there?

20 thoughts on “Hundreds of Radioactive Combat Vehicles Disappeared from Chernobyl”