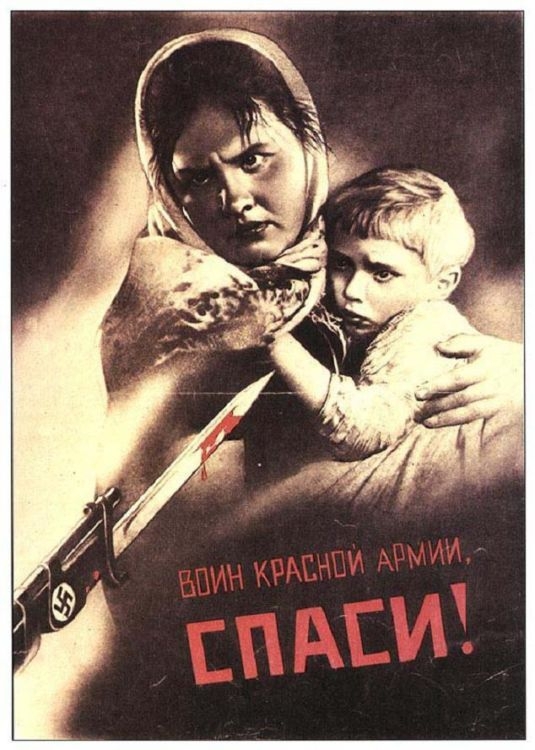 Probably the authorities of the country were not so much sure about loyalty of people when the enemy was already at the gates. So they used such propaganda to keep people away from another side. These posters are united in one collection as they adress Soviet women.

On the image above: “Red Army soldier, save us!” “SAILOR! Save your beloved girlfriend from vile skunks! Be merciless to executioners, kill rapists in a fight!” “Set our women free from that shame and abuse they are getting through due to the fault of German nazi monsters!
Stalin.” “Soldier of the Red Army, save us!” “The nazi beast will not escape from punishment!” “Fighter, Ukraine is waiting for you!” “Glory to liberators of Ukraine! Death to German invaders!” “I’ll revenge the Nazi for your tortures!” “For honor of mother, for life of children, for happiness of Motherland, for our fields and meadows, kill the invader!” “If you don’t want to give the house, where you lived, your mother and wife, everything you call the homeland, to the German with his black gun, – Be sure, nobody will save them if you don’t, nobody will kill the enemy, if you don’t!” “Kill the fascist – the wild fanatic!” “You’ll get yours for everything you do!” “The warrior of the Red Army! You will not let your love be disgraced by Hitler’s soldiers”.