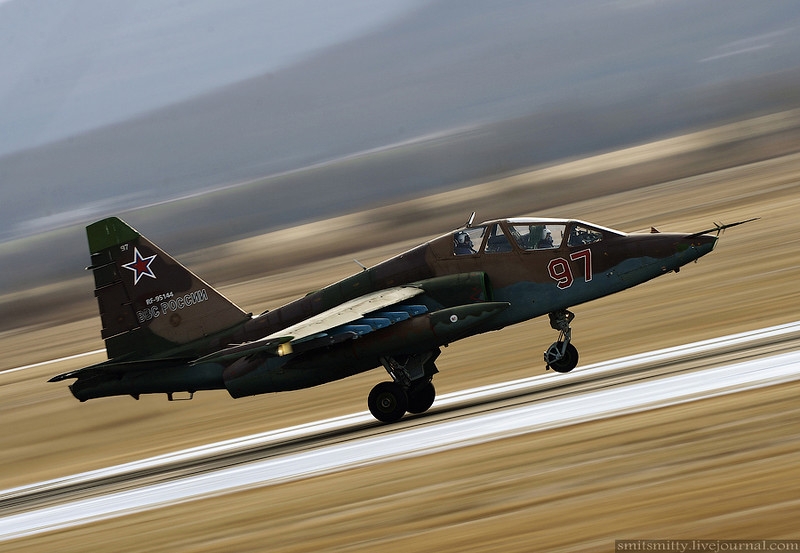 These are pictures of the recent tactical flight training of attack aircraft held at the air base “Chernigovka” in Primorye (Far East of Russia).

By now Su-25 are the only planes able to carry the highly powerful complex of armament for destruction of ground and air targets (air bombs, aircraft guns, free flight air-to-ground missiles and guided air-to-air missiles.

Su-25SM has ten external load points, it can carry 32 types of weapons.

In the nose part the craft has a cannon mounting VPU-17A with a twin-barelled 30 mm cannon GSH-30-2. It is intended to destroy armored vehicles, unsheltered manpower, air targets at medium and short ranges.

Original Su-25, that began to fly on February 22, 1975 and were put into operation in 1981, did not participate this time. They used Su-25SM – comparatively new modification.

As opposed to the old version, this one has absolutely new electronics, electronic indicator on the windscreen and multi functional indicator. Airframe and mechanical parts remained the same.

Together with Su-25 and Su-25SM the Chernigov base has combat training Su-25UB. Its cabin accomodates two persons – instructor and trainee.

The cabs of all planes belonging to the Su-25 family – all-welded capsules made from titanium armor – perfect protection for pilots. Armor plates are 6-25 mm thick, rear part of the cab is covered with a back protective armor (6 mm).

Cockpit enclosure windscreen is armored too. The cockpit has catapult seats K-36L.

Preparations for a flight takes much time. While equipment is prepared, crew members have a briefing.

Getting ready for another flight.

Thanks to smitsmitty for the pictures!